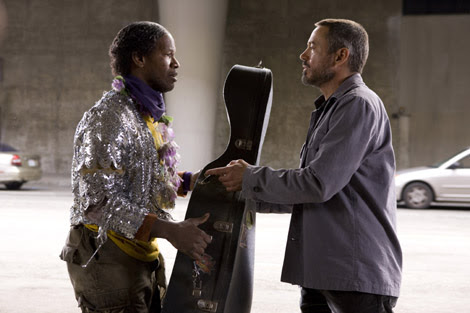 After two back-to-back successful films, British filmmaker Joe Wright was already one of the hot rising directors emerging into the mainstream. His 2005 adaptation of Jane Austen’s Pride & Prejudice and 2007’s Atonement had helped established Wright as a director who can create lush imagery. For his third film, Wright went to Los Angeles to direct a true story about a journalist who befriends a homeless musician suffering from schizophrenia called The Soloist.

Based on the book and articles of Steve Lopez, The Soloist is the story of how the troubled Lopez meets Nathaniel Ayers. Ayers was once a cello prodigy who became troubled by schizophrenia by the time attends Julliard and eventually becomes homeless. Directed by Joe Wright and screenplay by Susannah Grant, the film is a dramatic tale of how a troubled journalist’s life is changed by the meeting of a gifted musician as Robert Downey Jr. plays Lopez and Jamie Foxx as Ayers. Also starring Catherine Keener, Stephen Root, Lisa Gay Hamilton, Nelsan Ellis, Rachael Harris, and appearances from Wright’s Pride & Prejudice co-stars Jena Malone and Tom Hollander. The Soloist is an interesting but lackluster drama from Joe Wright.

Despite being an acclaimed journalist for the Los Angeles Times, Steve Lopez is a man whose life isn’t going very well. Divorced from his wife/L.A. Times Mary (Catherine Keener), Lopez is trying to find some way to get himself back on good terms following a bike accident. During treatment for his accident, he hears a violin playing in a yard as he comes across a homeless man named Nathaniel Anthony Ayers. Learning that he was in Julliard, he tries to find information as he was a student in the early 1970s only to drop out after a two year stint. After calling Nathaniel’s sister Jennifer (Lisa Gay Hamilton), he learns about Nathaniel’s life as a child as his mother (Lorraine Toussaint) believes he will do great.

After writing an article about Ayers, an old woman suffering from arthritis gives Lopez her cello for Ayers to play. After seeing Ayers at a tunnel, he gives him the cello as Lopez hears Ayers play as he realizes that he and the cello need to be in a safe place. Convincing Ayers to stay at a homeless shelter, it turns out to be a good idea as a doctor (Nelsan Ellis) helps out while suggesting that Ayers should get an apartment later on. The friendship slowly builds as Lopez also works on other assignments as he also takes Ayers to a rehearsal though it wasn’t easy due to Nathaniel’s attachment to his shopping cart. With things moving slowly, Lopez gets an apartment for Ayers despite some reluctance.

After bringing in a renowned cello player named Graham Claydon (Tom Hollander) to see Ayers, Claydon agrees hoping to help Ayers through music. Though the lesson goes well, he realizes that Ayers is becoming attached to Lopez as Ayers has a chance to play a recital. Instead, it becomes a disaster due to Ayers’ mental illness as Steve blames himself for what happens. Even as he felt that Ayers is helping him with his own issues.

The film is about a journalist’s unexpected friendship with a mentally-ill musician that ends up helping both of them. While it’s an interesting yet captivating story, the problem is that the screenplay tends to over-dramatize the relationship between Lopez and Ayers while there’s additional elements in the screenplay that doesn’t really belong in the film. There’s also an underdeveloped storyline about Lopez’s own relationship with ex-wife Mary though the truth is that Steve Lopez never got divorced. Some of the dramatic liberties that screenwriter Susannah Grant take with the story to makes the film lose focus on what it’s supposed to be about. Even as Grant adds a bit of heavy-handed ideas about the issue with the homeless, though its intentions are thoughtful, as well as a character that spouses religious ideals.

Joe Wright’s direction definitely has a lot of flourishes that he’s known in tracking shots, wonderful zooms, and lots of amazing ideas. The problem is that he is given an uneven script that doesn’t play to his strengths. While he creates some wonderful sequences where Lopez just plays the music, some of it becomes quite unnecessary as there’s a scene where birds (ala CGI) fly around Los Angeles that really overdoes the dramatic tone of the music.

At the same time, he also has to shoot scenes involving the homeless where while it’s interesting and does provide insight into that world. It becomes a distraction as if he wants to make something about the homeless situation in Los Angeles when really, the film should be about these two men. Despite some interesting sequences and some chances to not over-dramatize events, Wright stumbles with his approach for this film.

Cinematographer Seamus Garvey does some excellent work with the photography in bringing some wonderful yet gorgeous shots of the nighttime exterior scenes of Skid Row Los Angeles. While there’s some great shots of Los Angeles in other places. Garvey’s work is definitely a highlight though it’s nothing really new in comparison to other films shot in L.A. Editor Paul Tothill does a good job with the editing that includes some wonderful rhythmic cuts that plays to the music despite some pacing issues that slows the film down at times.

Production designer Sarah Greenwood, with set decorator Julie Smith and art director Greg Berry do a nice job with the look of the L.A. Times office as well as Lopez‘s home and the apartment that Ayers eventually lives in. Costume designer Jacqueline Durran does a fine job with the costumes in creating casual clothing for most of the cast including the look for Ayers with his cap and such that is pretty unusual but fun to look at.

Visual effects supervisor John Moffatt does some exceptional work for a sequence where it‘s just lights and swirling visuals that play along to the music though the sequences of the birds flying around Los Angeles isn‘t one of those great moments. Sound designers Craig Berkey and Christopher Scarabosio do some wonderful work with the sound to create a chaotic atmosphere for Los Angeles though some scenes where Ayers hears voices in his head gets a little repetitive and overdone at times.

Music composer Dario Marianelli creates an amazing film score that plays up to not just the dramatic elements of the film but also something that infuses Ayers’ gift as a musician. Along with pieces by Johann Sebastian Bach and Ludwig Van Beethoven that helps drive the soundtrack as Beethoven is the most dominant piece of music in the film. Along with cuts by Stevie Wonder, Neil Diamond, the Temptations, the Carter Family, and Beenie Man that all appear in the background. The film’s music and soundtrack is definitely the real highlight of the film.

The casting by Francine Maisler is pretty good for some notable appearances that include Stephen Root and Rachael Harris as fellow journalists of the L.A. Times, Justin Martin as the young Nathaniel Ayers in the flashback scenes about his early life, Lorraine Toussaint as Nathaniel’s mother, and in a cameo appearance, Jena Malone as a Goth-like lab technician. Nelsan Ellis is very good as the homeless shelter doctor who offers Steve Lopez guidance about dealing with Ayers’ illness. Lisa Gay Hamilton is also good as Nathaniel’s sister who is desperate to want to contact him a wonderfully understated scene with Jamie Foxx. Tom Hollander is excellent as Gary Claydon, a musician who tries to help Ayers though approaches it the wrong way.

Catherine Keener is pretty good as Mary Weston, Lopez’s ex-wife and editor, who is a bit baffled by her ex-husband’s fascination with Ayers though her character seems underdeveloped due to the fact that there’s not much more about her life with Lopez. Even as Keener has a very embarrassing scene where she gets drunk at a gathering with Lopez. Jamie Foxx is wonderful as Nathaniel Ayers as Foxx doesn’t go into a sense of vanity into playing a troubled man who refuses to believe he’s schizophrenic. Even as Foxx proves to be a wonderful musician while making some fascinating ramblings and such as he has great rapport with Robert Downey Jr.

Robert Downey Jr. is superb as Steve Lopez, a brilliant but complicated journalist seeking some sort of idea to get his hazy life back on track. While Downey brings some humor to his character, he also adds a lot of dramatic weight to a man who is fascinated by this individual he encounters. It’s a remarkable performance from Downey in the way he brings sympathy to a guy like Lopez.

Despite an amazing cast and a stellar soundtrack, The Soloist is a middle-of-the-road drama that got some great ideas but poor execution in its screenplay and in Joe Wright’s direction. While it wants to be an inspirational story of sorts, it’s coddled up with lots of bad decisions about Ayers’ illness along with some dramatic liberties about Lopez’s own life. Though Joe Wright does display some nice sequences that keep the film from being a total disaster, he’s hampered by the shortcomings of Susannah Grant’s screenplay. In the end despite the superb performances of Robert Downey Jr. and Jamie Foxx, The Soloist is a disappointing film from Joe Wright.

The cast is very good here but the script is an ultimate let-down and doesn't quite know what to do with all these different themes and plot points the film was trying to make. Good Review Steve as always!

Thank you Dan. I'm glad someone here wasn't fond of the script as well. Every story should have one thing to focus on unless it's about multiple things.