All the Real Girls

Originally Written and Posted at Epinions.com on 4/21/04 w/ Additional Edits. 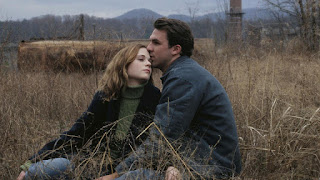 Written and directed by David Gordon Green based on a story he wrote with Paul Schneider, All the Real Girls tells the story of a North Carolina womanizer whose life changes by the arrival of his best friend's little sister from boarding school.  While friends and family aren't sure about the relationship, it would have a major impact for the young couple.  The film is a study of relationships and family as it's set entirely in the South where Green grew up.  Starring Paul Schneider, Zooey Deschanel, Patricia Clarkson, Shea Whigham, Danny McBride, Benjamin Mounton, and Heather McComb, All the Real Girls is a compelling yet hypnotic romantic-drama from David Gordon Green.

For Paul (Paul Schneider), life as a womanizer in his rural North Carolina home was fun after a while. Now, with little ambition into getting out his bleak surroundings, he has decided to give up his womanizing lifestyle and suddenly, he found the right time. While he hangs out with his best friend Tip (Shea Whigham) and pals Bust-ass (Danny McBride) and Bo (Maurice Compte), he learns that Tip's little sister Noel (Zooey Deschanel) has returned from boarding school. He meets Noel one night learning how much she's grown and realizes how mature and innocent she is. For Paul, Noel gives him the chance to grow while he often works at a garage for his Uncle Leland (Benjamin Mounton) and sometimes, help out his mother Elvira (Patricia Clarkson) with entertaining sick children at hospitals dressing up as clowns.

Noel is intrigued by Paul's charm although Tip doesn't like the idea of his sister going with Paul because of his past reputation with women. Noel learns about it from Paul as she often hangs out with his buddies talking about escaping their bleak surroundings. Paul learns that Noel is a virgin and they began to have intense conversations about an incident that scarred Noel in many levels as he decided not to sleep with her. To Paul, Noel represents the rare purity in which, they get much closer much to the dismay of Tip. Tip is angry at this situation afraid that Paul might hurt Noel. Whenever Paul isn't with Noel, he is with Uncle Leland, his daughter Feng-Shui (Maya Ling Pruitt), and his mother. One day, Elvira gets upset over the time Paul has spent with Noel since he forgot to help her where Paul begins to wonder if the relationship is healthy for everyone.

During a date, Noel tells Paul she's going away for the weekend with some friends just to have some time for herself. Paul is fine with the idea as he spends time with his family and Noel's mentally challenged brother Justin (John Kirkland) where he teaches him piano. Paul also talks with Tip, who learns he's about to become a dad where Tip feels that Paul at least is doing the right thing with Noel. When Noel returns from her weekend with a new haircut, she tells Paul something that jeopardizes their relationship while she tells him that she loves him. Paul feels anguished over what happens in which, he refuses to talk to Noel.

One night, he encounters an ex-lover named Mary-Margaret (Heather McComb) where he asks what he did wrong to her. She's still mad over what he did where Paul found Noel with Bust-ass. Paul feels things went wrong where Elvira confronts him over his actions in which, Paul decides to grow up more. While he learns more now about women and his past actions, he wonders if what Noel did was his fault in which, he wants to know what is to become of them.

While the only flaw in All the Real Girls is that its pacing at times is a bit slow, David Gordon Green does manage to bring in a story filled with human elements and emotions with a bleak surrounding that everyone can appeal to. Green's direction is filled with a sense of romanticism in the scenes with Schneider and Deschanel while bringing out shots of the bleak surroundings of the North Carolina town and its mills. In the screenplay, the film plays up to a restraint sense of drama with a bit of comedy and rural studies of men and women. Particularly the lifestyle and workplace of the characters in the town they live in.

The film's bleak look captured by cinematographer Tim Orr is spellbinding in its minimalist use of fall colors of orange and brown without using lighting or fake sunshine to make it look glossy. Orr's brings a sense of rural realism to convey the characteristics of the town and its people. Even the film's score by Michael Linnen and David Wingo of atmospheric, Southern acoustic harkens to the rich, yet melancholic tone of working class American South.

The film's cast is filled with delight from its smaller performances from Maya Ling Pruitt and John Kirkland in the children's role to Heather McComb and Maurice Compte in their roles as the locals. Danny McBride brings some humor as Bust-ass where he brings out all these commentaries on the lifestyle and his ambition to leave the town to be in a band where McBride shines in his performance. Benjamin Mounton is excellent as the wise but hopeless Uncle Leland as he shares his experiences with women in his scenes with Schneider. Shea Whigham is wonderful in his performance as Tip who starts out as this yokel who in turn, becomes the protective older brother and he develops into a sadder yet sympathetic tone where he learns of his own wrongdoings and making up for it to become a father.

Of the supporting cast, the best performance easily goes to Patricia Clarkson as Paul's blue-collar mother whose sense of frustration over her son's immaturity and lack of responsibilities is very understandable. Clarkson gives a performance that is filled with wisdom and a wonderful monologue about aging which is why Clarkson is one of the best actresses working today.

In the leading performances, Paul Schneider and Zooey Deschanel are spellbinding in their subtle, yet enigmatic performances as they bring a chemistry filled with heartbreak and anguish where they grow up in ways where you're aren't sure who to feel sorry for. It's the kind of chemistry that is enchanting in its realism, the same way that was felt in Lost in Translation in the conversations that Bill Murray and Scarlett Johansson had in the film. Schneider gives a performance that is more man than men usually do by playing himself in vulnerable positions in which, he can reveal himself and be funny and charming. In the more intense scenes, Schneider breaks hearts, as he doesn't want people to apologize for his past while we feel for his own anguish in a point of self-loathing over his own actions in relation to what Noel did.

Zooey Deschanel clearly, gives not just her best performance to date but also one of 2003's best performances from an actress in any age. Only in her early 20s, Deschanel brings in a subtle, stripped-down performance with intelligence and innocence that gives a sense of complexity to her character. Even as she explores Paul's past into her own action that would lead to a break in their relationship, she plays a young girl who is well wise beyond her years while exploring the world of adulthood. After some small but standout supporting roles in earlier films like Almost Famous, Mumford, The New Guy, The Good Girl, and Manic, Deschanel gives a performance that would serve as her break-out role into the world of indie and mainstream films.

All the Real Girls is an excellent, romantic drama from David Gordon Green with a superb cast led by Paul Schneider, Zooey Deschanel, and Patricia Clarkson. Though some might not like the film's bleak look or restrained drama, it's a film that is filled with real human moments and working class ethics. It's really a film that studies the behavior of young men and women and the actions that make them react to themselves emotionally. It's a film that doesn't play up to gloss only to convey emotional honesty. In the end, All the Real Girls is a superb film of young adult relationships and rural morality.