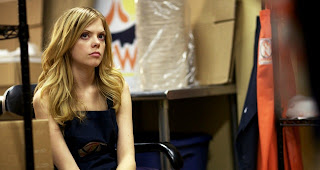 Written and directed by Craig Zobel, Compliance is the story about a prank caller who claims to be a police officer as he makes accusation to a fast-food manager whose cashier had stolen money. The film is based on a real-life incident that left many people in trouble and business reeling from the damage as the film focuses on the people ruined by this prank. Starring Dreama Walker, Ann Dowd, and Pat Healy. Compliance is a disturbing yet harrowing film from Craig Zobel.

The film takes place in the course of a very busy, tense day at a fast food restaurant where a cashier named Becky (Dreama Walker) is working on what was supposed to be her day off. Later that morning, her boss in Sandra (Ann Dowd) receives a call from a man (Pat Healey) claiming to be a police officer as he says that Becky had stolen money from a woman’s purse and she’s in trouble. Forced to listen to everything the officer says, Sandra had to take Becky in the back in which Becky had to strip her clothes to see if she’s carrying any money. Things eventually escalate as Sandra asks her fiancee Van (Bill Camp) to watch Becky as he is forced to listen to the man as things get far more disturbing. Even as it leads to these people asking questions about all of the things they’re being told to do.

Craig Zobel’s screenplay explores this real-life incident that led to countless lawsuits and people’s lives ruined by this incident as he creates it into this tense, dramatic story. Even as he chooses to focus on these individuals who are being played into a prank that eventually ruins them. There’s a young woman who is a good worker and hasn’t done any crimes who becomes a victim over these accusations as she’s forced to be stripped naked and wear an apron to cover herself as she waits for the police. Then there’s this manager who is being played for a fool as she’s listening to this man who is making claims about all of this. Though there’s questions about this manager on whether she’s really dumb or is just being manipulated on a very stressful day. She’s also a victim because of all of these things she’s been told to do.

Then there’s her fiancee as he comes in because one of the employees refuses to listen to what this man is telling him to do. He is just as reluctant where by the film’s second half, he is forced to listen to this man’s instructions as it would lead to moments that would disgust him. Yet, there’s questions about his own intelligence as well where one would wonder does he know what he’s being asked to do is wrong. Leading all of this is man who is essentially a sadistic individual who is in glee over ruining the lives of these people and manipulating them into doing what he wants. Even as he makes these exaggerated claims where there’s minor characters who would question about what is happening.

Zobel’s direction is entrancing in the way he captures the tension and suspense that occurs throughout the film. While it starts out as a calm, straightforward film where nothing happens early on in a very busy work day at a fast-food restaurant. That all changes once that phone call comes in where it becomes this very dark film that mostly takes place in a fast food restaurant. The camera is always wandering around where it doesn’t remain still but doesn’t delve into shaky camera movements. Even through these close-ups where it adds to the sense of discomfort that is happening. In the film’s second half, the culprit does get revealed where it is established that what this man is doing is a very disgusting prank.

Though things get more troubling by the third act, there’s some revelations that occur in the aftermath of the incident where it does sort of become a different film. Yet, it revolves around these discoveries and the people who were affected by this prank. Overall, Zobel creates a fascinating yet distressing film that explores the world of manipulation.

Cinematographer Adam Stone does excellent work with the film‘s photography from the colorful, sunny exteriors of the locations to the more ominous lighting schemes inside the store room where Becky is forced to stay throughout the film. Editor Jane Rizzo does wonderful work with the editing by creating some rhythmic, suspenseful cuts to play out the tension and the chaos that ensues at the restaurant. Production designer Matthew Munn, along with set decorator Tom McMillan and art director Michael Powsner, does nice work with the look of the fast-food restaurant as well as the claustrophobic yet tense store room where Becky has to be in.

Costume designer Karen Malecki does very good with the costumes from the uniforms many of the characters wear to the casual clothes that Van and the caller wear. Sound designer Rich Bologna does brilliant work with the sound to capture the atmosphere of the fast-food restaurant along with the eerie scenes at the store room including the moment between Becky and Van. The film’s music by Heather McIntosh is superb for its brooding yet ethereal score that is filled with ominous string arrangements and chilling ambient textures.

The casting by Kerry Barden and Paul Schnee is terrific for the small ensemble that is created as it includes Ashlie Atkinson as Sandra’s assistant supervisor, Philip Ettinger as Becky’s friend/fellow employee Kevin, James McCaffrey as a detective in the film’s third act, and Stephen Payne as the custodian Harold whose presence would impact the film’s third act. Bill Camp is very good as Sandra’s fiancee Van who is forced to watch Becky under the caller’s instruction where he ends up doing things he didn’t want to do. Pat Healy is incredible as the very sadistic caller who manipulates everyone as he pretends to be a cop as he calls through a cell phone to do everything.

Dreama Walker is wonderful as Becky as she displays a sense of restraint as a young woman who has to deal with accusations and humiliation where it would eventually affect her as she tries to defend herself. Finally, there’s Ann Dowd in a brilliant performance as the fast-food manager Sandra as she brings a very captivating approach to a character who is unaware that she’s being fooled while being stressed out by what is happening at work.

Compliance is a mesmerizing yet eerie film from Craig Zobel that features top-notch performances from Dreama Walker and Ann Dowd. The film is really an unsettling drama that bears a lot of hallmarks that is expected in suspense and horror films. Notably as it reveals a lot of harsh truths about manipulation as well as the fact that incidents like this really happen. In the end, Craig Zobel’s Compliance is a terrifying yet engrossing film that will definitely leave the audience in shock over the actions that occur in this film.

I never though much of the score until you mentioned it, but yeah it is a very important peice for the picture. It helps set the mood. Very Nice Review

Good review Steve. The whole idea that this is a true-tale is what really got me going for this flick, but I think Zobel kind of dropped the ball on the whole tense-aspect of it, especially when we see the caller. That could have really played with our minds and show that it could be anybody doing it, but instead, they decide to show him a bit too early in my opinion.

@Vern-The score really stood out as I thought it worked to set the mood while it wasn't very distracting.

@Dan-I would've preferred if they didn't show him but it somehow worked to see who this man is. Man, that guy was a sicko.

Nice man, I'm really glad you had a chance to see this one, and, more importantly, that you dug it so much.

@Alex-It was unsettling to watch. I was able to download the film via torrent and I was grossed out at times. I felt extremely unclean after seeing that film.