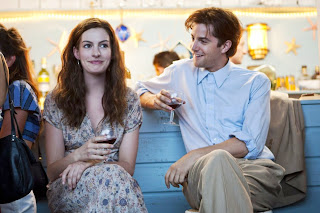 Based on the novel by David Nicholls, One Day is the story about a man and a woman who meet each other in the same day in the span of several years. During this time, the two would encounter many changes in their relationship and the individual lives they take. Directed by Lone Scherfig and written by David Nicholls, the film is a story about these two people and their unique relationship. Starring Anne Hathaway, Jim Sturgess, Romola Garai, Jodie Whittaker, Rafe Spall, and Patricia Clarkson. One Day, for all of its take on love, is an episodic and maudlin film from Lone Scherfig.

The film is essentially the story about these two people in Emma Morley (Anne Hathaway) and Dexter Mayhew (Jim Sturgess) who meet on July 15, 1988 on their graduation day as they become friends and eventually, lovers. In the course of more than 20 years, these two people would communicate and be with each other to discuss their lives while they both pursue their individual goals. Emma becomes a teacher and later a children’s novelist while Dexter’s aspirations as a producer has him starting off as annoying TV show host and later becoming a man with a sense of direction. They would also engage into different relationships with other people where they eventually realize how much they really care for each other.

It’s an interesting premise about the lives of these two people in the span of more than 20 years on one particular day being July 15. Yet, it’s a story that doesn’t do a lot to make it much more interesting as it ends up being episodic in its formula where they always do something on the 15th of July. There would a moment where they each have an individual moment in their lives and for a moment, not speak to each other for a few years. A reconciliation would happen as it would eventually lead to them finally being together that is later followed by something in the third act that would change things. While both Emma and Dexter are quite interesting and flawed characters, it’s just that the story isn’t well-executed as it plays too much into convention.

Lone Scherfig’s direction does have a lot of wonderful scenes and images that is playful and romantic. Yet, she doesn’t do enough to make the story more engaging as it does play into a lot of the conventions of being flirty in the first act, frustration in the second, and finally coming together in the third. Some of the moments between Emma and Dexter together are compelling in their conversations with bits of humor and drama. Once the story progresses, it starts to be a bit repetitive at times whenever Dexter is fooling around or Emma is just taking the moments of disappointment in her life. Though things do relax a bit in the third act that is followed by a very shocking moment. Scherfig does manage to find something that is poignant and give it a fine ending. Overall, Scherfig creates a film that is watchable but somewhat unsatisfying in terms of the love story it wanted it to be.

Cinematographer Benoit Delhomme does excellent work with the gorgeous, colorful photography for many of the film‘s locations in Britain and parts of France to complement the changing times the characters go through. Editor Barry Pilling does nice work with the editing to play out the structure and some of the film‘s emotional moments. Production designer Mark Tildesley, along with set decorator Dominic Capon and art director Denis Schnegg, does superb work with the set pieces such as the apartments Dexter and Emma lived in during their lives along with studio sets where Dexter worked at.

Costume designer Odile Dicks-Mireaux does some fine work with the costumes to complement the looks of Dexter and Emma in the different times they live in . Makeup designer Ivana Primorac does some terrific work with the look of the hair and makeup to make the character age a bit during the course of the film. Sound designer Glenn Freemantle does wonderful work with the sound to capture the energy of the clubs that Dexter frequent to the more intimate places that he and Emma go to. The film’s music by Rachel Portman is very good for its melancholic-driven orchestral score to play out the sense of longing between the two characters. Music supervisor Karen Elliot provides a decent soundtrack that captures the moment of the times with music from James, Tracy Chapman, Fatboy Slim, and Del Amitri.

The casting by Lucy Bevan is brilliant for the ensemble that is created although appearances by Jodie Whittaker as Emma’s friend Tilly and Patricia Clarkson in an excellent performance as Dexter’s mother Alison is kind of a waste as they don’t get enough to do. Ken Stott is very good as Dexter’s stern but caring father while Romola Garai is terrific as Dexter’s wife Sylvie. Rafe Spall is excellent in a standout performance as Emma’s aspiring-comedian boyfriend Ian who tries to make Emma laugh while deal with her relationship with Dexter.

Finally, there’s the duo of Jim Strugess and Anne Hathaway as they both give pretty remarkable performances. Strugess provides a lot of wit and energy to a character who is quite arrogant at times only to have humility as he later becomes a father. While parts of Hathaway’s English accent isn’t perfect, she does manage to create a performance that is full of charm and depth as a woman who just wants to be friends only to realize how much she cares for him. Sturgess and Hathaway do have some chemistry together in the way they interact as they do make a fine pair to watch and be compelled by.

Lone Scherfig: (Dogme 12-Italians for Beginners) - (Wilbur Wants to Kill Himself) - (Just Like Home) - An Education

This movie was crap. It didn't do much with it's romance and Sturgess' character came off as sort of a dick so when all of this bad shit was happening to him, I didn't really seem to care. Hathaway was good but could they really not get a British actress to do this movie? Nice review Steve.

I have the book, I have the movie, now I have to decide if it's worth reading the book before watching the film. I heard a lot of things about Hathaway's accent :)

@Dan-I've seen worse films. I thought this was OK and I didn't mind that Sturgess' character was a dick. It's part of his development.

@Diana-I wouldn't compare the book to the film. Then again, I never read the book. As far as Hathaway's accent. I've heard worse.