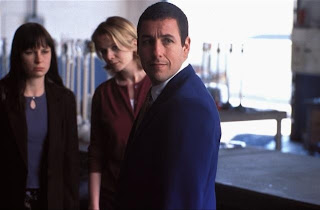 Written and directed by Paul Thomas Anderson, Punch-Drunk Love is the story of a lonely man who meets and falls for a mysterious woman as he pursues her while dealing with an extortion scam. The film marks a departure of sorts from Anderson’s previous efforts for something much more intimate and simpler as he aims to create a love story that involves two people who are out of sorts with conventional society. Starring Adam Sandler, Emily Watson, Luis Guzman, Mary Lynn Rajskub, Robert Smigel, and Philip Seymour Hoffman. Punch-Drunk Love is a mesmerizing yet touching romantic film from P.T. Anderson.

Barry Egan (Adam Sandler) is a business owner who is dealing with loneliness as he would often have emotional outbursts and fits of rage. Notably at a family dinner as he’s often ridiculed by his seven sisters including Elizabeth (Mary Lynn Rajskub). On one morning, Barry wakes up to see a harmonium being dropped into a street as a woman named Lena (Emily Watson) asks is she can park her car in his work place. Barry agrees as he wouldn’t see Lena again for a few days as she’s revealed to be a co-worker of Elizabeth. Dealing with his loneliness, Barry calls a phone-sex line where things get weird when the woman he talks to wants money for her rent. Barry refuses as he starts to get a strange idea to buy Healthy Choice pudding with airline mileage stickers so he can redeem some frequent flyer miles.


After seeing Lena again where the two have a date, she tells him she’s going to Hawaii for a business trip as she plans to see him again. Barry is elated until he’s being chased by a group of men who work for a mattress salesman named Dean Trumbell (Philip Seymour Hoffman) over the phone-sex money. Barry decides to go to Hawaii to see Lena as the two forge a very strange yet fruitful relationship. After they return from Hawaii, they’re attacked by Trumbell’s men where Barry manages to fight back as he decides to confront Trumbell in order to prove his devotion to Lena.

The film is really the story of this lonely, emotionally-awkward man with fits of rage who falls for an enigmatic yet captivating woman as they forge a very strange relationship in the course of a few days while he deals with an extortion scam. During the course of the film, this man would try to create a scheme of his own to buy as many pudding products to get some frequent flyer miles as a chance to go all over the world. In meeting this woman, it would make him more determined to create a scheme as he hopes to share it with the woman he is in love with.

Paul Thomas Anderson’s screenplay is more driven by characters and their actions rather than traditional plot schematics. Notably as it centers around this oddball in Barry Egan who wears the same blue suit wherever he goes. He’s a very strange man who doesn’t know how to socialize as he comes from a dysfunctional family where his sisters call him “gay boy” as he responds by destroying windows and later crying about it to his brother-in-law (Robert Smigel). In meeting Lena, it would provide the chance to get out of being lonely as well as motivate to prove his love to her. Yet, he would have these strange encounters that begins with this bizarre car crash where left behind is a harmonium that he would grow to care for. Then comes this group of brothers who want money following a phone-sex scam as they would try and threaten Barry until it involves Lena where Barry’s rage would finally take over as finds a reason to be use his anger for the sake of good.

Anderson’s direction is very stylish in the intimacy that he creates as he doesn’t go for a big scope in order to tell something that is much simpler. While the film starts off with this very strange, bizarre scene of Barry watching a car accident where he would find this harmonium. The film would have these small interludes that is filled by the artwork of Jeremy Blake to create the sense of a world that Barry wants to be a part of even though it isn’t real. Anderson would create shots that are simplistic in their presentation while maintaining a degree of style through some shots such as the scenes of Barry at the supermarket. The compositions would showcase something that has Anderson taking on ideas of humor where it’s presented naturally rather than forcefully.

Shot largely in Los Angeles with some parts of the film in Hawaii, Anderson chooses to create a film where he isn’t repeating himself visually as a lot of the lighting schemes are very low in order to create something that is dreamier. Even for many of the scenes at night where Anderson just wants to keep the visual look to be more grounded rather than emphasize too much on stylish lighting. The confrontation scenes where Barry starts to get angry shows a real sense of intensity as Anderson just has the camera fixated on Barry’s face in a medium shot to display his anger full-on. It’s part of Anderson utilizing new tricks to say something as he creates a truly engaging yet enchanting romantic film that explores the world of oddball love.

Cinematographer Robert Elswit does amazing work with the film‘s low-key photography by utilizing underexposed lighting schemes to create a grainy yet dream-like look for many of the film‘s nighttime scenes in both its exterior and interior settings to emphasize a gorgeous look to the film. Editor Leslie Jones does excellent work with the editing to create a more straightforward approach to the cutting while utilizing some rhythmic cuts for some of the film’s scenes in the supermarket. Production designer William Arnold, along with art director Sue Chen and set decorators Jay Hart and Lori A. Noyes, does terrific work with the set pieces such as the place that Barry works at along with the apartment that Lena lives in.

Costume designer Mark Bridges does nice work with the costumes from the blue suit that Barry wears to the red dress that Lena wears. Sound editor Phil Benson and sound designer Christopher Scarabosio do wonderful work with the sound such as the film‘s opening sequence as well as the dinner scene that overlaps a lot of the conversation that is interrupted by Barry‘s rage. The film’s music by Jon Brion is definitely one of his best scores as it’s driven by a harmonium to play off the serenity of the film’s romance that includes lush string arrangements. The soundtrack features a mixture of cuts by Conway Twitty, Lady K, and a remixed version of Harry Nilsson’s He Needs Me sung by Shelly Duvall from the Robert Altman film Popeye.

The casting by Cassandra Kulukundis is brilliant for the small ensemble that is created as it features some notable small roles from Robert Smigel as Barry’s brother-in-law, Luis Guzman as Barry’s co-worker Lance, and Mary Lynn Rajskub as his sister Elizabeth. Philip Seymour Hoffman is great in a small but menacing performance as Dean Trumbell who tries to boss around Barry only meet his match in their big confrontation scene. Emily Watson is incredible as Lena where Watson displays a sense of low-key charm and warmth to a woman who sees offbeat but there is something about that is endearing as it is definitely Watson at her best. Finally, there’s Adam Sandler in an astonishing performance as Barry Egan as Sandler creates a character that is troubled yet sympathetic character who is odd yet loveable. It’s Sandler displaying that he definitely has range as it is really the best performance of his career.

Punch-Drunk Love is an exquisite yet ravishing film from P.T. Anderson that features marvelous performances from Adam Sandler and Emily Watson. While it’s a film that doesn’t have the ambitious scope of Anderson’s other films, its approach to romance and drama is still engaging for the way he creates a very unconventional yet heartfelt story. Even as it features lush imagery and an exotic score that helps soar the film into uncharted territory. In the end, Punch-Drunk Love is a magnificent film from Paul Thomas Anderson.

Hey, hey, hey! Reviewed this on the same day as you! It's a great flick and one of my favorites from Anderson just because the funny style and Sandler's amazing performance. This is probably the best I have ever seen Sandler and it's a shame that no other dramatic role he tried to do could really measure up to Barry Egan. Good review bud.

I really think this might be my favorite Anderson film. It never ceases to astound me.

Haven't seen it yet,interesting to know PTA has made romantic films before,and with Adam Sandler in it!

@Dan-Actually, I wrote the review on Sunday and decided to wait a few days to publish it. I guess we were both thinking about that film at the same time. Awesome.

@Dave-It's a film that I think with repeat viewing, it gets better every time.

@David-See it. It's not as ambitious as his other films but it's still a very intimate film that is lovely to watch and reveals why Adam Sandler used to care so much about making movies.

I agree, it isn't as ambitious as his other films, but I love it all the same. This is probably the PTA film that I grow to love more and more the more I watch it. Just perfect.

@Alex-When I first saw it, I was disappointed at how short it was and it left me wanting more.

Then as I thought about it more and saw it again. I ended up loving it.