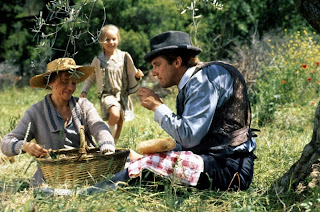 Based on Marcel Pagnol’s novel, Jean de Florette is the story about two men who try to trick a man over the land he had just inherited. Directed by Claude Berri and screenplay by Berri and Gerard Brach, the film explores the world of rural France after World War I as it explores the cruelty of men in their greedy desire for land. Starring Gerard Depardieu, Yves Montand, and Daniel Auteuil. Jean de Florette is a captivating film from Claude Berri.

Returning from military service to the small village of Provence, Ugolin Soubeyran (Daniel Auteuil) arrives at the farmland that is owned by his uncle Cesar (Yves Montand) as he presents his uncle with a profitable idea. Bringing in some carnation roots to grow where he manages to sell them for a good price, the two realize that the only way to make more money is to get the land nearby that is owned by a man named Pique-Bouffigue (Marcel Champel). When he refuses as he insults the Soubeyran family name, Cesar fights Pique-Bouffigue that leaves him dead. For Cesar, he hopes that relatives will sell the land so he can buy it off only to learn that Pique-Bouffigue’s nephew Jean (Gerard Depardieu) has inherited the land as he brings his wife Aimee (Elisabeth Depardieu) and their daughter Manon (Ernestine Mazurowna) to the land.

Having already blocked the water spring near the land, Cesar devises for Ugolin to befriend Jean and his family as Ugolin learn of Jean’s plans for the land. With plans to breed rabbits and grow vegetables in the land, Jean hopes to make a profit for the next few years. The only problem is that they don’t have lot of water in the land as they trek down a place owned by an Italian couple who have access to the water spring. Though things start off well at first despite the lack of water in their well, things eventually go bad due to a heat wave as Jean and his family force to trek downhill very often to get water which is bad for Jean’s humpback. After some trials and tribulations which makes Cesar excited, Ugolin goes to Jean’s land where he learns about another plan for Jean to get water for his land. What would happen would have some repercussions for all involved.

What happens when a couple of men conspire to gain a plot of land for their own reasons when they contend with a man from the city who has more honorable plans of his own? That is the idea of this story as it involves a man and his uncle hoping to use this land for their own ideas as they know about a secret water spring that they hope to use to help grow their carnations. After accidentally killing the land’s original owner where they hope to buy it from relatives, all of that changes when it is inherited by that man’s nephew who is this city tax collector hoping to start a new life as a farmer. This would force a man and his uncle to do things to make sure this man fails in his endeavors and get the land any way they can.

The screenplay explores the world of greed and cruelty in the hands of these two men though the character of Ugolin is the one who later becomes conflicted in his role to befriend Jean. In fact, he realizes that Jean isn’t a bad man yet Ugolin couldn’t be too friendly as he often makes excuses to not lend Jean his mule so that Jean can carry lots of water for his well. Then there’s Jean as he’s just a man wanting to start a new life where he can live comfortably as a farmer with his family. Yet, he’s an outsider to this small village who are suspicious of his intentions when he really just wants to be part of their community. He’s also a spiritual man as he prays to God for small things including rain for his crops. What would happen would push Jean to the edge as he becomes more desperate to cling on to the land that his mother was born in.

Claude Berri’s direction is definitely mesmerizing for the way he presents the film as this intimate period piece with gorgeous wide shots of the locations. He also set up shots that would later establish key moments that would become more important as the story progresses. Berri also maintains an intimacy with some close-ups and unique camera angles to help say something in these images as he’s always wanting to see how Jean would succeed as well as create tense moments where Jean is failing. Berri also maintains an air of suspense to see what will happen as the film’s third act explores Jean’s failures but also his desire to not quit. What would happen would lead to an ending that would set the course for the next part of the story in Manon des Sources. Overall, Berri creates an exhilarating yet poignant story of greed and humanity.

Cinematographer Bruno Nuytten does brilliant work with the cinematography from the gorgeous, naturalistic camera work of the exterior locations to the intimate lighting in the film‘s interiors along with a lovely sepia-awash look for the dust-wind scene. Editors Noelle Boisson, Sophie Coussein, Herve de Luze, Jeanne Kef, Arlette Langmann, Corinne Lazare, and Catherine Serris do terrific work with the editing by creating some wonderful montages and using other stylish cuts to help move the film‘s structure and transitions. Production designer Bernard Vezat does excellent work with the set pieces such as the farms of the Soubeyran land as well as the wonderful farm land that Jean had set up.

Costume designer Sylvie Gautrelet does nice work with the period costumes from the rich clothes that Jean wears to the more rural clothes that everyone else wears. Sound editor Eric Mauer does superb work with the sound from the atmosphere of the exterior locations to some of the chaos in the bars that Cesar hangs out at. The music by Jean-Claude Petit is wonderful for its soaring orchestral score that plays out all of the drama and light-hearted moments of the film while the music also features excerpts from Giuseppe Verdi’s La forza del destino for more dramatic moments of the film.

The film’s cast is amazing for the ensemble that is created as it features some notable small roles from Margarita Lozano as the old Italian lady who lives near the water spring, Marcel Champel as Pique-Bouffigue, and Ernestine Mazurowna as the young Manon who doesn’t seem to trust Ugolin. Elisabeth Depardieu is wonderful as Jean’s wife Aimee who deals with Jean’s obsession to maintain the land as well as the sacrifices that she makes. Daniel Autieul is great as Ugolin Soubeyran as he befriends Jean in order to see what he’s doing as he later gets into his own conflict over the real reasons why he’s doing it. Yves Montand is incredible as the conniving Cesar Soubeyran who tries to ensure that Jean will fail for his own means while instructing his nephew on what to do. Finally, there’s Gerard Depardieu in a brilliant performance as Jean Cadoret as Depardieu brings a lot of enthusiasm to a man intent on creating a new life for himself while dealing with the struggle that he faces as it’s one of Depardieu’s great roles.

Jean de Florette is a marvelous film from Claude Berri that features top-notch performances from Gerard Depardieu, Yves Montand, and Daniel Autieul. The film is definitely a very intriguing piece about the world of greed and deceit as well as an engaging period film that features a character everyone wants to root for. In the end, Jean de Florette is a radiant yet mesmerizing film from Claude Berri.

This was literally the first foreign language film I ever saw. It was back in the late 80s and Cinemax showed this. I'm not sure why I watched it, other than it sounded interesting. I also found that after a couple minutes I had no problems reading the subtitles and forgot I was even doing it.

That's the magic of foreign films. I don't mind reading subtitles just as long as the story was engaging. This was a such a joyful film to watch.