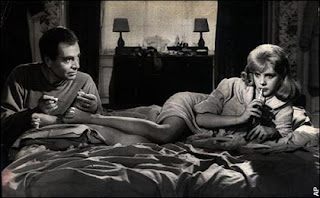 Based on the novel by Vladimir Nabokov, Lolita is the story of a middle-aged professor who becomes obsessed with a teenage girl as he deals with the consequences of their relationship. Directed by Stanley Kubrick and screenplay by Kubrick, Nabokov, and James Harris, the film explores the world of obsession as it revolves around a man’s relationship with an underage girl. Starring James Mason, Sue Lyon, Shelley Winters, and Peter Sellers. Lolita is a captivating drama from Stanley Kubrick.

Professor Humbert Humbert (James Mason) arrives at a small town in New Hampshire looking for a place to live in the summer as he stops at house owned by Charlotte Haze (Shelley Winters). Haze is a widow who has rooms available at her home as Humbert isn’t sure about living there until he catches a glimpse of Haze’s teenage Dolores (Sue Lyon) who is also named Lolita. Humber lives at the home as he is amazed by Lolita’s presence as he decides to forge a relationship with Charlotte in order to be close to Lolita. Things seem fine in the household though Charlotte is often annoyed by Lolita’s presence as she sends her to summer camp in order to spend more time with Humbert. The two marry as Humbert becomes more infatuated with Lolita where Charlotte makes a discovery in Humbert’s diary.

After a tragic incident, Humbert leaves town to pick up Lolita at camp where the two go on a road trip across the country. At a stop at a hotel, Humbert meets a mysterious man (Peter Sellers) who is bewildered by their relationship. Humbert and Lolita live in another town for Humbert’s tenure as the relationship becomes rocky when Lolita wants to participate in a school play. Humbert refuses until a psychiatrist from Lolita’s school believes that Lolita should be in the play as Humbert finally acquiesces Lolita’s request. Yet, things get more troubling as Humbert and Lolita go back on the road as Humbert’s paranoia leads to health issues for the two of them. Yet, more problems start to emerge where Humbert gets a mysterious phone call that leads to Lolita’s disappearance as he wouldn’t see her until a few years later where would confront the man who picked her up at the hospital.

What happens when a man falls for a teenage nymphet as he tries to pursue a secretive relationship that eventually would cause a lot of trouble? That is the premise of this very provocative story that explore a middle-aged man’s infatuation with this young teenage girl. Professor Humbert is just a man who is intrigued by this young woman who is very unique and has this presence that is just fascinating to watch. Lolita is a young girl who is mature at times while just wanting to be a kid who likes to drink soda pop, chew gum, and do all sorts of things. The two together have this relationship that is strange as they hide it from the outside world yet they would raise question to the people they would encounter during their journey.

The screenplay that its writer Vladimir Nabokov would create explores this strange dynamic between these two very different people. Notably as it revolves around this middle-aged man’s passion with this young woman who feels controlled by her outgoing mother. For Lolita, having Humbert around gives her the chance to be with someone who cares about her and is willing to be attentive to her needs no matter how childish she can be. Then there’s supporting characters like Charlotte Haze who is essentially a widow who has been alone for a long time that is desperate to have a man in her life not just for her own social status but to have someone in her life that doesn’t involve Lolita whom she seems to resent.

Another character that comes into play in the story every now and then is this mysterious man named Clare Quilty. Throughout the film’s reflective narrative that is largely focused on Humbert’s perspective, Quilty is this man who seems to be everywhere as Humbert would only meet this man on a few occasions yet never really come face-to-face except in a confrontation near the end of the story. What becomes more intriguing is what does he have to do with Lolita where Humbert would start asking questions about some of Lolita’s activities in the film’s second half where it is eventually revealed towards the end.

Stanley Kubrick’s direction is definitely hypnotic in the way he presents the film as more than just a typical drama. Instead, Kubrick creates a film that blurs genres where there’s an element of dark humor, some suspense, some eerie film-noir devices, romance, and melodrama all mixed into one entire film. Yet, he opens the film with its ending where it does set-up a lot of what Humbert has to reflect on just as he’s about to commit a horrible crime against this mysterious man who had been around him during this strange journey. Throughout the film, Kubrick creates unique framing devices to present the characters and the situations that happens along some close-ups to help display the mixture of emotions running through these characters.

The direction also has Kubrick taking on some unique ideas of how he frames his actors in a scene. Notably this one moment where Humbert is outside the hotel having a conversation with this mysterious man as Kubrick places Humbert in the background while this mysterious man is almost in front of the camera. It’s Kubrick establishing Humbert’s clueless nature about this man whom is often talked about as he was seen dancing with Charlotte early in the film at a dance. Throughout its first two acts, the film plays off as a bit of melodrama mixed in with romance yet things start to shift towards something darker in the third act as it revolves around a paranoid Humbert and a more indifferent Lolita as their relationship starts to crumble.

This would lead to Lolita disappearing and an penultimate scene between the two that is melodramatic in terms of the revelations that are unveiled as it shows a full-on development between the two and their relationship. Then the film goes back to the very beginning where it would be followed by this epilogue revealed in text over what happened. It would reveal not just moments of tragedy but also the sense of loss that came into this very taboo relationship between a middle-aged man and a teenage girl. Overall, Kubrick crafts a very mesmerizing yet intriguing film about a man’s fascination with a young girl.

Cinematographer Oswald Morris does brilliant work with the stylish cinematography from the lush look of the daytime exterior scenes to more entrancing, noir-like lighting schemes for some of the film‘s interior and exterior nighttime scenes to help set the mood for these moments. Editor Anthony Harvey does wonderful work with the editing by using rhythmic cuts for some of the film‘s emotional moments as well as dissolving transitions to help the film move at a brisk pace. Art director William C. Andrews does fantastic work with the set pieces from the home of the Haze house to the lavish hotel that Humbert and Lolita stay in.

Sound recorders H.L. Bird and Len Shilton do terrific work with the sound from the atmosphere of the dance party Humbert, Charlotte, and Lolita attend to the intimacy of the scenes on the road. The film’s music by Nelson Riddle is amazing for its orchestral-driven score that features dramatic themes and suspenseful cuts along with a playful pop piece that plays to the film’s offbeat dark humor. Additional music by Bob Harris is for the film’s soaring orchestral theme that plays to the sense of romance that occurs in the film.

The casting by James Liggat is superb for the ensemble that is created as it includes some notable small roles from Lois Maxwell as a hospital nurse, Marianne Stone as Quilty’s companion Vivian Darkbloom, Shirley Douglas as Lolita’s piano teacher, Jerry Stovin and Diana Decker as a couple of Charlotte Haze’s friends, and Gary Cockrell as a young man named Richard that Lolita would be with late in the film. Shelley Winters is great as Lolita’s mother Charlotte who resents Lolita as she is desperate to cling to Humbert as she tries to woo him in every way while realizing the horrifying truth about Humbert’s fascination with her daughter.

Peter Sellers is outstanding as the very mysterious Clare Quilty who appears in very strange parts of the film such as the film’s opening scene where he tries to chit-chat his way out of a situation while also being very manipulative in every way as it’s definitely one of Sellers’ great performances. Sue Lyon is wonderful as the titular character from the presence that she creates to the complexity she brings as a young woman who is quite mature but also very childish as she deals with Humbert’s infatuation as well as her sense of rebellion. Finally, there’s James Mason in an incredible performance as the troubled Professor Humbert as he falls for the young Lolita as well as trying to ensure that what he’s doing isn’t wrong where he later becomes a man who descends into madness as he’s desperate to cling into the young woman that he’s in love with.

Lolita is an astonishing film from Stanley Kubrick that features marvelous performances from James Mason, Sue Lyon, and Peter Sellers. While it is definitely a very uneasy film to watch due to its subject matter and Kubrick’s approach to create a story that bends genres. It’s definitely a very engaging film that explores the world of taboo love as well as obsession in the eyes of a middle-aged man. In the end, Lolita is an intoxicating yet chilling drama from Stanley Kubrick.

I really liked Mason and Lyon in this, but I'm afraid I can't agree on Sellers. He's actually the reason I ultimately didn't like this film. Yes, the limits of the time prevented them from showing Quilty as the truly evil person he is, but Sellers ended up playing him like a buffoon or clown. That completely removed any hint of menace from the character.

Langella made a much better Quilty in the remake. (And yes, I realize Seller's made a whole career out of mugging for the camera, but it just doesn't work for this role.)

@Chip-I'm a sucker for Sellers and his work. Though I do understand that Kubrick expanded the Quilty character just for Sellers.

It's been years since I've seen the Adrian Lyne version with Frank Langella. If I can get my hands on it, I'll watch it and compare/contrast though I heard some prefer the Lyne version over Kubrick's.

"I heard some prefer the Lyne version over Kubrick's"

I'm one of them. A large part of this is that the 97 version simply could be closer to the story than the early 60s version. Part of it was the aforementioned Quilty character. I thought the main characters were fine in both versions, and the mother was irritating in both versions, so they are basically a wash.

The 97 version was allowed to show more complexity in the Lolita character than the 60s version and I felt this made it better.

@Chip-I remember that the 97 version was more faithful to the book. Again, I need to rewatch that film so I can express my thoughts about the film.

I love Kubrick's version,but Lyne's version is not far behind.Peter Sellers stole every scene he was in and was the highlight for me in this film.

@David-Peter Sellers was also my favorite thing in the film as I really enjoyed his devious performance.