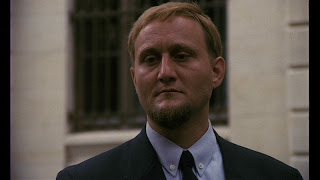 Based on the novella The Golden Egg by Tim Krabbe, Spoorloos (The Vanishing) is the story about a man whose lover has been kidnapped as he goes on the search to find her as he meets a mysterious man. Directed by George Sluizer and screenplay by Sluizer and Tim Krabbe, the film is an exploration into the world of obsession of a man trying to find the woman he loves. Starring Bernard-Pierre Donnadieu, Gene Bervoets, Johanna ter Steege, and Gwen Eckhaus. Spoorloos is an entrancing and chilling suspense film from George Sluizer.

The film is essentially this story about this Dutch couple in Rex (Gene Bervoets) and his girlfriend Saskia (Johanna ter Steege) going on a trip to France where they stop at a gas station where Saskia is about to get some drinks as she also has the car keys. All of a sudden, she’s gone as Rex believes she had disappeared as it leads to a three-year obsessive search to find her where he meets a mysterious man named Raymond (Bernard-Pierre Donnadieu). Throughout the course of the story, Rex wonders what happened to Saskia while there’s also this intriguing story about Raymond who is this mild-mannered family man with a dark side. Yet, it is all about this game where the abductor is controlling the situation as he wonders how far this young man will go to find his beloved. Even as they would eventually meet as it leads to all sorts of disturbing revelations.

The screenplay explores the idea of obsession in the mind of Rex who feels responsible for the loss of his girlfriend as he is intent on wanting to know what happened to her. While the screenplay does have a plot that is simple, it’s narrative approach is very unique as it moves back and forth into the storylines of Rex and Raymond. The Raymond character is among one of the most interesting individuals in the history of films for the way he plots out every detail of his abductions though not all of them are successful due to various circumstances. Still, he’s a man who takes his time while being very secretive to his family about what he does outside of his work as a college professor and as a family man. There’s a lot of ambiguity to this character as his eventual meeting with Rex in the third act reveals a lot about who he is as he would do whatever to show Rex what happened to Saskia.

George Sluizer’s direction is very hypnotic in terms of his framing and creating scenes that plays to the element of suspense such as an early scene of Saskia alone in the car inside a tunnel where Rex walks to get some gas. Yet, Sluizker keeps things low key for the most part until Saskia is never seen again where he always has the camera placed around things that are happening or in more intimate moments involving Raymond. Still, Sluizer maintains that air of mystery in the way Raymond conducts his life where there is a bit of dark humor that occurs. By the time the film reaches its third act where Rex and Raymond finally meet, there is this air of terror that is to occur where Raymond reveals what happened on that day when Saskia disappeared. Things get more intense as the film starts to wind down where Sluizer keeps things low key in order to build up the suspense where it leads to some big surprises. Through these eerie compositions and brooding setting, Sluizer maintains this unsettling atmosphere that plays up that the unexpected. Overall, Sluizer creates a very terrifying yet mesmerizing thriller about abduction and obsession.

Cinematographer Toni Kuhn does superb work with the film‘s entrancing cinematography for many of the film‘s dark, nighttime scenes whether it‘s the early scene in the tunnel or the drive at night with Rex and Raymond as it maintains a mood to play out the suspense. Editors George Sluizer and Lin Friedman do great work with the film‘s editing to play out its unique structure by shifting the narrative back and forth while using fade-outs as transitions along with some rhythmic cuts for its suspenseful moments. Art director Santiago Isidro Pin does terrific work with the few set pieces used in the films such as the homes that Raymond lives in to the office that Rex works at.

The sound work of Piotr van Dijk is wonderful for the atmosphere it creates in some of the film‘s most unsettling moments such as the scene with Rex and Raymond on the road that adds to the film‘s suspense. The music of Henry Vrienten is amazing for the varied mood it creates through very different styles of music from piano-driven pieces to more eerie, electro-ambient cuts to maintain that air of suspense that occurs in the film.

The film’s cast is excellent as it features some noteworthy small roles from Lucille Glenn and Tania Latarjet as Raymond’s teenage daughters, Bernadette Le Sache as Raymond’s wife Simone, and Gwen Eckhaus as Rex’s girlfriend Lieneke who tries to help Rex out about Saskia. Johanna ter Steege is great as Saskia as she has this amazing presence early in the film as a woman who is hoping to have a wonderful vacation unaware of what is going to happen to her. Gene Bervoets is brilliant as Rex who deals with the loss he faced as he starts to lose himself in searching for Saskia as it’s a really terrifying performance of a man losing grip on reality. Finally, there’s Bernard-Pierre Donnadieu in a phenomenal performance as Raymond Lemorne as this very quiet man who exudes a sense of charm when he’s with his family. Outside of that, Donnadieu carries this restrained approach to his character who is cool and collected in the way he sets up his trap as it’s really unforgettable performance.

It's a shame that George Sluizer changed the ending for his American remake with Keifer Sutherland.

Great review. I had no idea what this movie was about when I first saw it, and damn, you're so right... it breaks all the rules and then some.

@The Vern-I had seen the American version years ago. It sucked. Thank goodness the original was much better. Especially with the ending.

@Alex-Thank you. I just hope you haven't seen that godawful American remake. If you have, what a waste.

Yeah, this film is so damn creepy. I love it.

@Bonjour-It has the makings of a great thriller. Why did they screw it up with that unnecessary American remake?

Sadly, I did sit through the remake. I thought, because it had the same director, it'd somehow be good. Wrooong.

@Alex-I had the unfortunate of seeing the American version before I saw the original. That was terrible.

It's been a long time since I've seen that version and don't really remember much about it.

Awesome review! This is such a frightning movie mostly because of the ending and how realisticly it all looks. Also the villain, acting without any specific motives, only makes it scarier.

@Sati-I know. The villain is what makes the film. And here's the weird thing. I was kind of rooting for the guy because he was pretty cool.