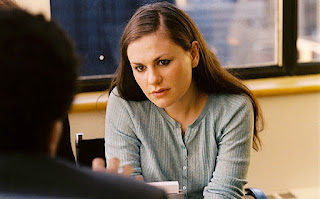 Written and directed by Kenneth Lonergan, Margaret is the story of a young woman who feels responsible for causing an accident that left someone dead. In turn, she deals with the guilt over what happened while going through all sorts of things in her own life. The film is an exploration into the tumultuous life of a young woman who goes through lots of changes in her life as well as trying to find herself. Starring Anna Paquin, Matt Damon, Mark Ruffalo, Kieran Culkin, Olivia Thirlby, Rosemarie DeWitt, J. Smith-Cameron, Matthew Broderick, Jeannie Berlin, Allison Janney, and Jean Reno. Margaret is a haunting yet mesmerizing film from Kenneth Lonergan.

What happens when a young 17-year old student distracts a bus driver where an accident is caused resulting in the death of a woman as this young woman deals with the guilt over what happened? That’s pretty much the idea of what this film is about as it explores a young woman named Lisa Cohen (Anna Paquin) whose life changes due to an accident she caused all because she asked this bus driver (Mark Ruffalo) about his cowboy hat while he was driving the bus. For Lisa, she deals with the guilt over what happened as she has no idea what to do as she tries to protect the driver since what he did was an accident yet when she meets him to discuss the accident. Things don’t go well as she decides to change her statement to the police while contacting a woman to help file a lawsuit against the bus company in hopes the driver gets fired.

While the story largely revolves around Lisa’s tumultuous life as she deals with guilt and loss, there is a subplot revolving around Lisa’s mother Joan (J. Smith-Cameron) who finds herself in a relationship with a man named Ramon (Jean Reno) which causes issues between the two women who already have a troubled relationship. Notably as Joan is a stage actress while Lisa is just a high school kid who likes to smoke and do crazy things. The accident definitely causes a rupture in their relationship where Lisa starts to act out more in school and later befriend the friend of a victim where they go for a lawsuit. Yet, Lisa’s behavior becomes more complicated over the guilt she deals with families of the victim gets involved as well as other aspects of her life including relationship with boys and her attraction towards her math teacher Aaron Caije (Matt Damon).

The script also allows to explore the dynamic between Lisa and Joan as they’re two different women who are going through changes in her life. While Joan is concerned over what happened to Lisa, she has no idea how to talk to Lisa who starts to become more detached and angry. Yet, Lisa would also deal with the realities of how things are handled with the police and the lawsuits as it would cause more complications about who she is. Particularly as she is this 17-year old high school student who is in the transition into becoming a woman.

Kenneth Lonergan’s direction is very entrancing for the way he presents this very dramatic story that contains very heavy themes. Shot on location in New York City in the Manhattan area, Lonergan does make the city a character in the story though he does go a bit overboard in utilizing lots of insert shots to help fill the story though some parts are effective. Notably as the camera gazes through the city to show a world where things are already moving on despite the incident that had just happened. Lonergan’s direction also has a lot of unique framing devices to help capture the sense of loneliness and detachment that Lisa is going through. There’s also a lot of shots that are stylized including the big accident scene where Lonergan uses the crane to express the sense of loss and longing that Lisa goes through.

Another part of Lonergan’s direction that is unique is the fact that film also features scenes at the Metropolitan Opera House to establish not just the world Joan is in but also the drama she’s facing in her own life. Other scenes such as school discussions about politics show Lisa becoming more aggressive in her arguments where she will sometimes go way too far. These are moments to establish this detachment and anger these two women are going through where they will vent to each other and say things to each other that intensify. Yet, Lonergan will find a way for the women to reconnect where both women will face something that would overwhelm them leading to a powerful ending. Overall, Lonergan creates a very strong yet harrowing film about guilt and loss.

Cinematographer Ryszard Lenczewski does excellent work with the film‘s photography as a lot of it is straightforward to complement the beauty of New York City in its day and nighttime settings. Editors Mike Fay and Anne McCabe, with additional work from filmmaker Martin Scorsese and his longtime editor Thelma Schoonmaker, do superb work with the editing to play out the drama as well as some of its intensity as it includes some stylized moments in the non-dialogue scenes. Production designer Dan Leigh, with set decorator Ron von Blomberg and art director James Donahue, does nice work with the sets from the look of the apartments to the look of the school.

Costume designer Melissa Toth does terrific work with the costumes as a lot of it is casual with the exception of the scenes at the opera house. Sound designer Jacob Ribicoff does brilliant work with the sound to capture the low-key atmosphere of the opera houses to the more raucous scenes in some of the film‘s exteriors and phone conversations. The film’s music by Nico Muhly is amazing for its low-key orchestral pieces with some haunting arrangements on the strings while the soundtrack features an array of classical and operatic pieces along with some few indie-rock and hip-hop cuts in the party scenes that Lisa goes to.

The casting by Douglas Aibel is a major highlight of the film for the rich ensemble that was assembled for the film. Among those making small appearances include Krysten Ritter as salesgirl, John Gallagher Jr. as a friend of Lisa in Darren, Olivia Thirlby as a classmate of Lisa, Sarah Steele as Lisa’s friend Becky, Kieran Culkin as another classmate of Lisa whom she has sex with, Michael Ealy as a lawyer who advises Lisa, Jonathan Hadary as a lawyer who deals with the suit that Lisa is involved in, Cyrus Hernstadt as Lisa’s younger brother Curtis, Josh Hamilton as an actor Joan works with, and Rosemarie DeWitt as the wife of the bus driver. Other notable small roles include Matthew Broderick as a drama teacher, Allison Janney as the victim who is killed in the bus accident, and Jeannie Berlin as the victim’s friend Emily who helps out Lisa with the suit.

Jean Reno is wonderful as the very kind Ramon who falls for Joan as he tries to get to know Lisa. Matt Damon is excellent as Lisa’s math teacher Aaron Caije who is trying to understand Lisa’s behavior as well as her attraction to him. Mark Ruffalo is superb as the bus driver who causes the accident as he is aware of what he’s done while deals with Lisa’s aggressive manner towards him in the one scene they have together. J. Smith-Cameron is great as Lisa’s mother Joan who tries to deal with Lisa’s detachment while she falls for the businessman Ramon as she finds the escape she needed to deal with Lisa. Finally, there’s Anna Paquin in a remarkable performance as Lisa Cohen as a young woman dealing with tragedy as she becomes lost in her grief while becoming more angry over the way the world deals with what she is trying to do and such.

Margaret is an extraordinary yet engrossing drama from Kenneth Lonergan that features amazing performances from Anna Paquin and J. Smith-Cameron. The film is definitely an intriguing drama that explores the world of grief and detachment as well as interesting piece about the dynamics between mother and daughter. In the end, Margaret is a marvelous film from Kenneth Lonergan.

Kenneth Lonergan Films: You Can Count on Me - Manchester by the Sea

Glad you enjoyed it too. Margaret is the newest film in my top 100. I haven't seen yet the extended 178 min cut, though I've heard it gives too much away, in terms of subtleties.
Agree about Paquin's performance and that she's trying to find herself. Was surprised how effective it is considering it's gone through production hell.
I know it isn't loved by all,though. I think the length of the film makes us step into a world and see Lisa's mood swings. Maybe it could have been a mini-series instead, who knows.

Very uneven, but that's only because of the fact that it was cut-down so much. I'm still waiting for that 3-hour version. Good review Steve.

Great review. This film was so unsettling to me. I honestly had no idea if I loved or hated it when I first saw it. But upon reflecting, it really is one hell of a unique character study.

@Chris-I am not sure if I am willing to see the extended version but I still like what I saw. There were a few things that I felt needed to be cut but it's still enjoyable.

@Dan O-I'm sure there's more that is explained in the 3 hour version. I have to mull whether or not I'm willing to check out that version.

@Alex-It was on TV and I decided to see it. There's parts of the film where I wanted to hate Lisa for how immature she is but I can sympathize with her for the fact that she's wracked with guilt. It's a film I think people should see.

Nice review! I really wanted to like Margaret, but it didn't interest me much.

@Lights Camera Reaction-Which cut of the film did you see? I only saw the 2 1/2 minute theatrical cut. I agree that it's flawed but still interesting. I'm eager to see what's in the extended cut.