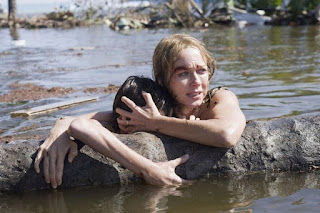 Directed by J.A. Bayona and written by Sergio G. Sanchez, The Impossible is the story about a family’s survival during the 2004 Indian Ocean earthquake and tsunami as it is based on the real life experience of Maria Bolon and her family. The film is an exploration into how a family survives one of the most catastrophic events in human history. Starring Ewan McGregor, Naomi Watts, Tom Holland, Samuel Joslin, Oaklee Pendergast, and Geraldine Chaplin. The Impossible is a harrowing yet powerful film from J.A. Bayona.

The film is essentially the story about how a British family survived the 2004 Indian Ocean tsunami while vacationing in Thailand where they endure one of the great catastrophic events in history. During this tsunami, the family is splintered in two as Henry Bennett (Ewan McGregor) is with his two youngest boys in Thomas (Samuel Joslin) and Simon (Oaklee Pendergast) as they’re at the hotel where they’re safe as Henry goes on the search for his wife Maria (Naomi Watts) and their eldest son Lucas (Tom Holland). Maria and Lucas are swept up by the water where Maria is badly injured as Lucas has to help her where they get help as Maria is weakened by her wounds. While there’s a lot of uncertainty to whether Maria survives, Lucas tries to fill his time to help others while finding out if his father and brothers are still alive.

Sergio G. Sanchez’s screenplay that is based on Maria Bolon’s story doesn’t require a lot of plot schematics as it’s just a simple story about a family’s survival in this catastrophic event. Yet, it does reveal a lot into what this family goes through as it is also told in the eyes of children. Notably the Lucas character as he’s this teenage boy who is forced to grow up due to what he has been through while helping his wounded mother as she’s got a bad leg and stab wounds on her chest. Lucas also has to deal with the possibility that he might not have a family as he helps other people try to find loved ones while being at the hospital. His character not only goes through the most growth but also becomes the most determined when he sees something that makes him realize that he might not be alone after all.

While Thomas and Simon don’t have as much development as Lucas, they still have a compelling story of their own as Thomas, who is the middle child, is known for being very scared. When he and Simon have to go to a shelter while their father wants to find out where his wife and Lucas are. Henry does reveal to Thomas that it’s OK to be scared as he just needs to watch out for Simon so that these two can keep each other company. There is the prospect that the boys might not have their mother as she’s weak from her wounds as their father knows that as well as it is up to a family to ensure that they’ll be together despite the tragedy they’ve just encountered.

J.A. Bayona’ direction is definitely engaging for the way he presents a world in chaos where this family is at the center of this devastating moment. While Bayona employs a lot of hand-held cameras for some close-up and intimate moments including a home-video camera shot of the family playing around. Bayona definitely creates a lot of shots that are grand in terms of what he wanted to present as it is a mixture of visual effects and real locations. While the film was shot largely in Spain with some shooting in Thailand, Bayona uses the landscape to tell the story where it is a world in ruin where a mother and son are trekking around this land as they find help where they would encounter a survivor in a young boy named Daniel (Johan Sundberg).

The scenes of the actual tsunami happening is just gripping to watch where it has this air of unpredictability and danger that occurs. It almost feels like the audience is in the water and being part of this moment. Bayona wants the audience to realize how this woman survived this horrific wave as she’s underwater and being hit with all sorts of things while she is trying to reach out towards her son. The atmosphere in the direction for the scenes after the tsunami are just as harrowing to watch where there’s all of these people struggling to survive and deal with what just happened. Yes, there’s moments that are just hard to watch and will be melodramatic but it plays true to what these people have been through. Overall, Bayona creates a truly sprawling yet heartfelt film about survival and the human spirit as it also serves as a true inspirational story.

Cinematographer Oscar Faura does excellent work with the film‘s photography from the sunny yet grimy look of the exterior locations to the more low-key lights for scenes at night as well as some of its interior scenes. Editors Elena Ruiz and Bernat Vilaplana do brilliant work with the editing to capture the energy of the action as well as jump-cuts for some rhythmic moments as well as effective cutting for some of the film‘s dramatic moments. Production designer Eugenio Caballero, along with art directors Didac Bono and Marina Pozanco and set decorator Pilar Revuelta, does terrific work with some of the set pieces from the look of the hotels and hospitals as well as scenes in the locations to create the air of despair.

Costume designers Anna Bingeman, Sparka Lee Hall, and Maria Reyes do nice work with the costumes to display the sense of ruin the character go through. Visual effects supervisor Felix Berges does amazing work with the visual effects for some of the scenes involving the arrival of the tsunami as well as some backdrop dressing for some of the film‘s exterior setting. Sound designer Oriol Tarrago does fantastic work with the sound to capture the sense of terror that occurs underwater and in the water as well as the scenes in the hospitals and shelters. The film’s music by Fernando Velazquez is wonderful for the orchestral serenity it plays to the film’s dramatic moments as well as using some low-key piano accompaniments to play out the drama and uncertainty that occurs.

The casting by Shaheen Baig and Raweeporn “Non” Srimonju is incredible for the ensemble that is created as it features some memorable small roles from Johan Sundberg as the young boy Daniel that Lucas and Maria find in the aftermath of the tsunami, La-Orng Thongruang as the old Thai man who finds Lucas, Maria, and Daniel, Ploy Jindachote as the caregiver at the hospital, Sonke Mohring as a man who helps Henry find any survivors, and Geraldine Chaplin as an old woman who sits with Thomas at the shelter talking about stars. Oaklee Pendergast and Samuel Joslin are excellent as the youngest boys in Simon and Thomas, respectively as Pendergast plays the youngest as a boy just scared about what happens while Joslin is the middle child who is aware of what he has to do in order to not be afraid.

Tom Holland is outstanding as the eldest son Lucas as he deals with the events that he just went through as well as realities that he’s facing. It’s a truly engaging performance for the way Holland lets the audience see what he’s going through while desperate to hold on to what he has left. Ewan McGregor is fantastic as Henry as a father dealing with the possibility that he might have lost a wife and a son as he is desperate to find them while admitting to his youngest sons that he is scared. Naomi Watts is phenomenal as Maria as a woman who goes through hell as she is beaten and bruised by the waves as she tries to stay alive for her son as well as cling to the idea that the rest of her family could still be alive.

The Impossible is an intense yet mesmerizing film from J.A. Bayona that features magnificent performances from Naomi Watts, Ewan McGregor, and Tom Holland. While it is not an easy film to watch in terms of the visceral events that occur in the film, it is still a story that is just unforgettable. Notably in the way it reveals the triumph of the human spirit and how a family was willing to come together in this horrific event. In the end, The Impossible is a tremendous film from J.A. Bayona.

Great review Steve. Not as endearing or emotional as I was expecting, but still a pretty powerful story that would have been made a lot better, had it actually starred Spanish people in the leads. Oh well, that's cynical Hollywood for ya.

I could see why they had to cast English actors to do it though I do think it would've been different if it was told with Spanish actors.

I'm not really bothered by it. Just as long as there's a good story to tell.