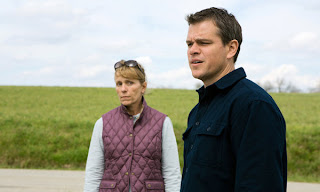 Directed by Gus Van Sant and screenplay by Matt Damon and John Krasinski from a story by Dave Eggers, Promised Land is the story of two corporate business officials who arrive at a small town in order to buy drilling rights from local residents only to deal with an environmentalist. The film is the story about the world of fracking as well as the battle between small towns and big businesses. Starring Matt Damon, Frances McDormand, John Krasinski, Rosemarie Dewitt, and Hal Holbrook. Promised Land is an interesting but lackluster film from Gus Van Sant.

Steve Butler (Matt Damon) is a consultant from a natural gas company called Global as he goes to a Pennsylvanian small town in the hopes to win over the locals so they can give them natural gas and still maintain their farmland. With the help of fellow consultant Sue Thomason (Frances McDormand), the two arrive to the town where they meet with a few locals to talk about what they do where things seemed fine at first. Even as Butler convinces a local official (Ken Strunk) about the prospects of natural gas and how it could help the town. During a town meeting, a retired schoolteacher in Frank Yates (Hal Holbrook) asks many question as he knows a lot about what Butler is doing though Butler tries to assure the locals that he has the right intentions.

After the disastrous meeting, Butler and Thomason try to figure out how to win back the town when an environmentalist named Dustin Noble (John Krasinski) arrives to reveal to the town about the dangers of fracking claiming he’s lost his family’s farm to fracking. For Butler, Noble’s arrival raises complications as they’re also competing for the affections of a local schoolteacher named Alice (Rosemarie Dewitt). Butler and Thomason continue to talk to a few people where they win over some as they want to hold a fair to win the town back. Still, Butler tries to deal with Noble’s presence as he eventually makes a discovery that would change everything including Butler’s view on the world.

The film is the story about a corporate consultant who hopes to help a small farming community in Pennsylvania by bringing natural gas in the hopes that everyone can make money and keep their farm. Yet, questions about fracking are raised as an environmentalist arrives to complicate matters forcing the corporate consultant to do whatever it takes to win over the people. While the subject of fracking is interesting since it plays to a lot of what is happening in the world of farming in America. The film also reveals the dangers where despite this interesting subject, the story starts to fall apart a bit towards the second half and its third act due to some preachy moments and a twist that causes the story to lose some steam.

The screenplay that Matt Damon and John Krasinski creates does raise a lot of interesting questions about fracking where they do their best to make the subject accessible without dumbing it down. The story eventually becomes the archetype of the little man vs. the big corporation where things do eventually become complicated. Steve Butler and Sue Thomason aren’t bad people as they’re just corporate officials with good intentions that just wants to help out farmers. They just find themselves in big trouble when questions are raised about what they do. When the Dustin Noble character arrives to the scene, he is this strange environmentalist who reveals the dangers of fracking where he would irk both Butler and Thomason for the fact that they’re confusing the people.

The subplot involving Butler and Noble trying to win the affections of the Alice character doesn’t work entire despite the fact that Alice is still a compelling character. It does reveal more about who Butler is as he came from a small farming town where he does reconnect with his roots while the people he meets know he’s just a good person. Though the script does play into conventions, it still is engaging until the third act where there’s a big twist revealed that is later followed by some heavy-handed moments that just makes the story fall apart.

Gus Van Sant’s direction is pretty good for the way he presents the world of Pennsylvanian farming and its small towns. Notably as he employs a lot of aerial shots of the locations as well as a few stylistic wide shots. Yet, the direction doesn’t really do a lot to make the story more engaging that it should be. Van Sant does put in some interesting framing in the way he presents the actors as well as few scenes that are stylized. Notably some scenes in the bar where Van Sant employs some moments of humor as well as a dramatic scene where Butler talks to a suspicious farmer (Scoot McNairy). Still, the direction doesn’t do enough to give it a more stylistic flair or to help bring the script more to life as it ends up being sort of pedestrian. Overall, Van Sant creates a film that is decent but ends up falling apart due to its third act where it becomes very preachy.

Cinematographer Linus Sandgren does excellent work with the photography to display the beauty of the Pennsylvanian farmland in its daytime exteriors while utilizing more low-key lighting schemes for the scenes at night in its exterior and interior settings. Editor Billy Rich does nice work with the editing where a lot of the cutting is straightforward though there‘s a few stylistic moments such as a split-screen conversation between Butler and Thomason as well a other stylized cuts. Production designer Daniel B. Clancy, along with set decorator Rebecca Brown and art director Gregory A. Weimerskirch, does terrific work with the set pieces from the look of the bar Butler attends to the motel he and Thomason stay at.

Costume designer Juliet Polcsa does good work with the costumes as a lot of it is very casual to maintain that world of small-town life. Sound editor Robert Jackson, along with mixers Leslie Shatz and Felix Andrews, does wonderful work with the sound to capture the atmosphere of the bars and town meetings along with the intimacy of farm life. The film’s music by Danny Elfman is superb as the music is very low-key in its orchestral setting where there‘s not bombast but serene while music supervisor Brian Reitzell provides a soundtrack that is mostly filled with country music including a few cuts by Emmylou Harris.

The casting by Francine Maisler is great as it features some notable small appearances from Lucas Black as an eager young farmer, Scoot McNairy as a suspicious young farmer, Terry Kinney as Butler‘s boss, and Ken Strunk as local town official Gerry Richards. Hal Holbrook is brilliant in a small yet effective supporting role as a retired teacher/farmer who raises questions about fracking while knowing that Butler means well. Rosemarie DeWitt is wonderful as Alice as this teacher who is charmed by both Butler and Noble as she reveals to Butler about her own farm life.

John Krasinski is terrific as the very eager Dustin Noble as he is this environmentalist who is very likeable and charming in the way he presents his case while being the great sore eye to Butler. Frances McDormand is excellent as the no-nonsense Sue Thomason who helps Butler out while embracing the world of small town life as she tries to deal with Noble. Finally, there’s Matt Damon in a superb performance as Steve Butler as this corporate official who tries to win over the town only to deal with this young environmentalist as he tries to do whatever to assure the town that he’s just trying to help them.

Promised Land is a fine but lackluster film from Gus Van Sant. Despite an interesting subject matter and a stellar cast, it’s a film that falls apart due to some of its preachiness as well as a messy third act that includes a ludicrous twist. For fans of Gus Van Sant, this film is definitely one of his weakest though it does have moments that does show his unique visual flair. In the end, Promised Land is a very underwhelming film from Gus Van Sant.

Good review Steve. It's a movie that's always about, what it's about, and nothing more. That bothered me, frankly because I know that fracking is bad and it's not something I want, but yet, this flick continued to remind me as if I didn't already know. It's nothing more than a message movie, and a lame one at that.

Yeah, I watched that film with low expectations. I was hoping for something more from Gus Van Sant. Instead, he was just a director for hire and didn't put enough of his own personality into the film.

I know fracking is bad and I didn't mind the debate but it got overbearing and the twist in the end didn't help things.