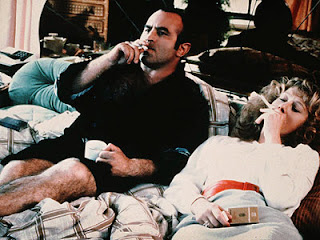 Directed by John Mackenzie and written by Barrie Keeffe, The Long Good Friday is the story of a gangster seeking to go legit only to see his empire being crumbled by an unseen foe. The film is an exploration into changing times in the wake of social and political turmoil in the 1970s in Britain as it revolves a gangster dealing with these changes. Starring Bob Hoskins, Helen Mirren, Bryan Marshall, Eddie Constantine, Derek Thompson, and Paul Freeman. The Long Good Friday is a suspenseful yet thrilling film from John Mackenzie.

In the world of the mob, there are rules about what to do when deals are made and how to conduct things. For this mob boss in Harold Shand (Bob Hoskins), he’s always been careful and making sure he get things done while he doesn’t deal in drugs in the hope to do something good for Britain. Just as he’s about to make this deal with an American mobster in Charlie (Eddie Constantine) that would help ensure London’s status with the world. Something goes wrong as a series of bombings and murders occur as Shand and his men wonder what is going on. Even as Shand tries to get the police involved as the film becomes a mystery of sorts about not just this new enemy that Shand is facing but an indication that the old ways he’s been known for is on its way out.

Barrie Keeffe’s screenplay is an exploration into the fall of a crime boss’s empire just as he’s eager to become a legitimate businessman. Yet, these incidents that revolve around the death of some of his key personnel all takes place in the span of nearly two days starting on Good Friday. For Shand, he’s baffled into why all of these deaths are happening as he doesn’t have many enemies while it comes at the worst possible day. With his mistress Victoria (Helen Mirren) trying to smooth things out for Charlie and his lawyer Tony (Stephen Davies), even Victoria is aware that Charlie knows something as she doesn’t bullshit them but does manage to keep them in Britain for another day so that Shand can conclude their deal.

Of course, things do become complicated for Shand as he targets associates and such as he has no idea who to trust. Yet, his right-hand man Jeff (Derek Thompson) and a police official in Parky (Dave King) have an idea on who is targeting Shand. What Shand would find out is that the enemy that he’s dealing with are from an entirely different world as well as the fact that they don’t play by the old rules. Jeff and Parky would try to tell the old-school Shand to not approach this with violence but Shand has this belief that once something can be taken care of. It will go away. Still, there are things that become more complicated when Shand will do things that become overwhelming as Victoria would be the one person who will step in and try to sort things out but from afar as she is the closest person that Shand could trust.

John Mackenzie’s direction is definitely entrancing not just for some of the compositions that he creates but also the way he sets up the air of uncertainty that occurs in the suspense of the film. The film does start off with this montage involving a business deal that would set the stage for what is to happen. Yet, it doesn’t involve Shand directly yet it does involve his men. Though Shand is oblivious as he’s more concerned about this deal as it is presented with such lavishness on his yacht where behind him is the London Tower bridge in the frame. It’s an image to display Shand’s idea for the future of London while maintaining an air of tradition of what Britain is about just as he’s unaware of some of the things that is happening in his empire. Mackenzie does use a lot of stylistic shots from the use of cranes and tracking camera shots including some amazing images that play up the suspense.

Mackenzie’s approach to suspense is at times slow-building but also comes in for some unexpected moments as it does involve some key characters. After a few bombings, there is that sense that something could go wrong and another bomb might come in. Once there’s an idea of who the enemy is, things become more complicated as it all goes back to the beginning of the film. It reveals how this small deal involving one of Shand’s key men would lead to all sorts of trouble. The camera work becomes much tighter as well as ominous because it establishes the idea of a new world order emerging to get rid of the old. Especially if this new group is an organization that no one including the crime world should fuck with because the rules are different as Mackenzie puts in little moments that would establish this idea of a new world order. Overall, Mackenzie crafts a very haunting yet powerful crime drama about changing times and a crime boss’ fall.

Cinematographer Phil Meheux does brilliant work with the film‘s very vibrant cinematography for many of its daytime scenes while creating more stylish lighting schemes for scenes at night including some of its interior settings. Editor Mike Taylor does terrific work with the editing to play out the film‘s suspense along with some rhythmic cuts for some of the film‘s violent moments. Art director Vic Symonds does nice work with the look of Shand’s yacht and penthouse that he shares with Victoria as well as the look of the meat locker where he confronts some suspects.

Costume designer Tudor George does wonderful work with the costumes from the look of the men’s suits to the dresses that Victoria wears to display not just her persona but also as a woman of great importance. Sound editor Russ Hill does excellent work with the sound from the tense atmosphere in the dinner scene between Victoria, Charlie, and a couple of associates to the more chilling moments involving some of the film‘s violence. The film’s music by Francis Monkman is absolutely phenomenal as it’s a mixture of rock and electronic music driven by synthesizers to play out the sense of dread and uncertainty that occurs in the film as well as some eerie pieces that adds to the drama of the film.

The casting by Simone Reynolds is amazing as it features early film appearances from such future figures in British cinema like Dexter Fletcher as a kid watching Shand’s car, Paul Barber as an informant Shand confronts, Kevin McNally as a man in a Belfast bar, Karl Howman as Parky’s associate, Gillian Taylforth as a young woman who makes a chilling discovery, and Pierce Brosnan in his very first film role as an Irish hitman. Other notable small roles include Stephen Davies as Charlie’s lawyer Tony, P.H. Moriarty as Shand’s brutish hitman Razors, Bryan Marshall as councilman named Harris, Paul Freeman as Shand’s best friend Colin who gets killed early in the film, Dave King as the police official Parky, and Derek Thompson as Shand’s right-hand man Jeff who eventually reveals the kind of trouble that Shand is dealing with.

Eddie Constantine is great as the American gangster Charlie who knows more than what is going on as he becomes reluctant to do business with Shand over the incidents that’s been happening. Helen Mirren is fantastic as Shand’s mistress Victoria who deals with some of the chaos that is happening as she tries to keep the business going while keeping Shand in check as it’s a very captivating performance for a role that could’ve been conventional. Finally, there’s Bob Hoskins in his breakthrough performance as Harold Shand as an old-school gangster who attempts to go legit only to unravel by various incidents as he tries to hold on to the old ways in a world that’s changing. It’s a performance that allows Hoskins to be tough but also vulnerable as it’s a very mesmerizing performance from Hoskins.

The Long Good Friday is a remarkable crime thriller from John Mackenzie featuring incredible performances from Bob Hoskins and Helen Mirren. The film isn’t just an intriguing gangster film but also a study into changing times as it revolves around a gangster’s empire crumbling by these changes. Notably as it involves enemies that are coming from a different world with different ideas making things difficult for the old world order. In the end, The Long Good Friday is an exhilarating film from John Mackenzie.

A very thorough analysis of a great film. I've always liked this one, not least because it arrived at a particularly difficult time for the British film industry. There are a lot of great gangster films that are often cited as some of the greatest works of cinema (The Godfather, Goodfellas, City of God, for example), but I think The Long Good Friday deserves to be up there. It has a very authentic aesthetic and construction to it. And the ending is one of my favourites - it really leaves a lasting impression.

That ending was brilliant. It's just presented with great simplicity. Nothing more. Nothing less. I really hope it gets a proper DVD/Blu-Ray reissue in the U.S. It's a film that needs to be seen more.