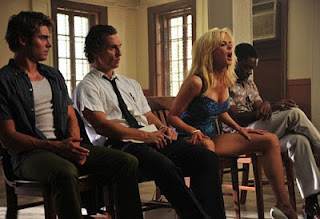 Based on the novel by Pete Dexter, The Paperboy is the story about a reporter and his younger brother trying to investigate the murder of a sheriff by trying to free a man accused of the murders. Yet, things become complicated when the young man finds himself being attracted to the incarcerated man’s lover as it leads to all sorts of trouble. Directed by Lee Daniels and screenplay by Daniels and Dexter, the film is an exploration into the world of the American South as it reveals the motives of people as well as those who are unaware of what they’re in for. Starring Matthew McConaughey, Zac Efron, Nicole Kidman, John Cusack, David Oyelowo, Macy Gray, and Scott Glenn. The Paperboy is a dark yet disturbing film from Lee Daniels.

The film is the story about this idealistic reporter and his younger brother trying to see whether this man had killed a sheriff some years ago. In order to get answers, the reporter brings his British associate for help along with a woman who had been writing letters to this incarcerated man claiming she’s in love with him. Eventually, things become complicated as the reporter is trying to find the truth in the hopes he can unveil the mystery while his younger brother is attracted to this woman who is quite messed up herself as she desires this man she’s been writing letters to. It’s a film that is filled with lots of ambiguity not just in the characters but the situations that occur where the story is told largely by this maid whom the brothers adore though she’s not present in a lot of what happens in the film.

The screenplay by Lee Daniels and its novelist Pete Dexter is quite unique for the fact that it’s a story about a group of people investigating a murder that happened a few years ago as it’s set in the late 1960s. Through the narration of the maid Anita (Macy Gray), she reveals a lot about what happened as it begins with the mysterious murder of this feared sheriff as a man named Hillary Van Wetter (John Cusack) was accused of the murder. For the reporter Ward Jensen (Matthew McConaughey) and his associate Yardley Acheman (David Oyelowo), they return to Ward’s hometown to investigate the murder to see if what Van Wetter is really innocent. With the help of Ward’s younger brother Jack (Zac Efron) as their driver, they also bring in Van Wetter’s lover Charlotte Bless (Nicole Kidman) into the mix though they had never met.

During the course of the investigation, a lot happens as Jack finds himself attracted towards Charlotte as he also to deal with other things in his home life as he often antagonizes the more clean-cut and ambitious Yardley. Jack is also bewildered by his brother as there’s also something about him that is ambiguous yet his intentions as a reporter is still clear as he’s hoping to find the truth and do what is right rather than what sells stories. While the story is really about Jack and all that he encounters during this investigation. The fact that it’s told by Anita does make it strange since she is really a minor character in the film and she does give a lot of exposition that is unnecessary. Particularly since the stuff she reveals is something the audience can already figure out.

Lee Daniels’ direction is quite stylish in the way he presents a typical period time set in the summer of 1969 in a small town in Florida. Notably as he makes sure that it’s not clean-cut where he utilizes moments that are definitely shocking and tawdry. Even as it’s an environment where there’s an element of racism where African-Americans aren’t treated fairly and people do say racial slurs towards them. Even towards someone as refined as Yardley who is this British man that has no idea of what life is like in America where he describes Ward’s hometown as a shit-hole. Even Ward doesn’t want to come back to place but reluctantly does so since the crime happened near his home. While the film is a melodrama of sorts, there’s also elements of camp in some of the things that happen.

Notably a scene where Charlotte and Hillary first meet where it’s completely off-the-wall in terms of its presentation. It’s a film that isn’t afraid to not be shocking though it does go overboard at times. Still, Daniels is intrigued by the world that the characters venture into where it does get darker in the third act as lots of revelations are unveiled. Particularly about certain characters as some of them aren’t exactly as they seem to be. Notably for Jack and Charlotte as they’re definitely the most clear-cut characters of the film who are aware of their complications and don’t carry a lot of secrets. That is probably one of the reasons why Jack is so attracted to her though he has to deal with the fact that she is devoted to Hillary where it does lead to a powerful climax. Overall, Daniels creates a compelling film that is messy at times but still engaging for the sense of style that he brings to this very grimy story.

Cinematographer Roberto Schaefer does brilliant work with the film‘s colorful yet gritty look to capture the beauty and ugliness of 1969 Florida with its small town look and sunny beaches as well as the chilling scenes in the swamps. Editor Joe Klotz does great work with the editing with its use of jump-cuts and multiple split screens to add an element of style to the film. Production designer Daniel T. Dorrance, along with set decorator Tim Cohn and art director Wright McFarland does excellent work with the set pieces from the garage that Ward and Yardley work at to the decayed look of the swamp home that the Jensen brothers encounter.

Costume designer Caroline Eselin does wonderful work with the costumes from the trashy look of Charlotte with her stylish clothes to the more straight-laced clothes the men wear. Sound mixer Jay Meagher does terrific work with the sound to capture the atmosphere of the swamps as well as some of the places the characters go to. The film’s music by Mario Grigorov is superb for some of themes created ranging from melancholic piano pieces to brooding electronic cuts where the latter adds an element of suspense. Music supervisor Lynn Fainchtein creates a fantastic soundtrack that features a lot of the soul and pop music of the late 1960s to complement the times.

The casting by Leah Daniels and Billy Hopkins is phenomenal for the ensemble that is created as it features notable small roles from Scott Glenn as Jack and Ward’s father W.W., Nikolette Noel as W.W.’s new girlfriend Nancy whom the boys dislike, and Ned Bellamy as Hillary’s disturbing uncle Tyree. Macy Gray is OK as the Jensen’s maid Anita whom the boys adore though Gray doesn’t really do much to make her character more interesting as she’s also the film’s narrator. John Cusack is unfortunately miscast as Hillary Van Wetten as this very repulsive man who is in love with Charlotte as there’s a seediness to him where it seems like Cusack is trying to do his impression of Nicolas Cage at times. David Oyelowo is very good as the snobbish Yardley who is a man with refined tastes as he doesn’t like Jack very much at all while he has an agenda of his own that would conflict with Ward’s intentions for the story.

Nicole Kidman is amazing as the very tawdry and trashy Charlotte as a woman who is so intent on meeting Hillary as she finds herself fascinated by Jack while reluctantly helping him and Ward out in the investigation where she finds herself in big trouble. Matthew McConaughey is incredible as Ward Jensen as he is this man with an idealism to help spread the truth where he goes into conflict with his estranged father while getting the kind of help he can from Ward while he is carrying a secret of his own. Finally, there’s Zac Efron in a remarkable performance as Jack Jensen as this former swimmer turned paperboy who deals with the events that are surrounding him as well as his attraction towards Charlotte where Efron finally gets to show his chops as a serious actor as he can be confrontational as well as being un-likeable at times.

While it is a film that does have some flaws, The Paperboy is still an interesting yet unsettling film from Lee Daniels. Thanks to the top-notch performances from Zac Efron, Nicole Kidman, and Matthew McConaughey, it’s a film that explores a period in time where things are secretive as well as being nothing as it seems to be including people. It’s also a film that isn’t afraid to not take itself so seriously though it does make the film a mess at times. In the end, The Paperboy is a pretty good film from Lee Daniels.

Lee Daniels doesn't seem as up to this material as his cast, but what a freakin' cast. Everybody seems to be having a lot of fun and games with these against-type roles and it made me wish they took more like these. It seems like Matthew's already gotten that memo. Good review.

We're in complete agreement here. Yeah, it's a tad odd, but I kinda dug its absurdist tone. And Kidman just killed it.

@Dan O.-With the exception a few people, Nicole Kidman, Matthew McConaughey, and Zac Efron really did excellent work. Plus, I think they were having a good time.

@Alex-It's going to be in my honorable mentions of 2012. It's not a bad film but not a great film either. Yet, you can't help but be engaged by it no matter how tawdry it is.