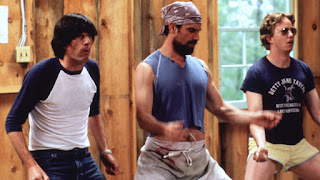 Directed by David Wain and written by Wain and Michael Showalter, Wet Hot American Summer is the story about a group of people attending a Jewish summer camp as they’re all hoping to do something on the camp’s last day. Set in 1981, the film is an exploration into nostalgia as well as adulthood and finding love. Starring Janeane Garafalo, David Hyde Pierce, Michael Showalter, Michael Ian Black, Marguerite Moreau, Paul Rudd, Elizabeth Banks, Bradley Cooper, Molly Shannon, Zak Orth, Amy Poehler, A.D. Miles, and Christopher Meloni. Wet Hot American Summer is a hilarious and heartfelt comedy from David Wain.

The film is essentially the story about a camp director and several staff members at a Jewish summer camp as they spend their last day looking for love or deal with their own issues in the course of an entire day. In this day, a lot happens surrounding many characters as they each hope to give this last day something for themselves and the kids to remember. There’s the camp director Beth (Janeane Garafalo) who falls for an associate astrophysics professor named Henry (David Hyde Pierce) as they both are unsure how to express their attraction towards one another. Meanwhile, a young camp counselor in Coop (Michael Showalter) has a crush on another camp counselor in Katie (Marguerite Moreau) who is dating the unfaithful Andy (Paul Rudd).

While the script that David Wain and Michael Showalter doesn’t have much of a traditional structure in order to leave room for the actors to improvise and do things that has nothing to do with any big storylines. Its lack of plot does allow the script to focus on the characters and their own desires to find love or something that can make their last day at camp a great one. A lot of which involved with people all finding something whether it’s the arts and crafts teacher Gail (Molly Shannon) dealing with her divorce, talent show director Gail (Amy Poehler) trying to create the best show, a shell-shocked Vietnam veteran in chef Gene (Christopher Meloni) dealing with demons, or a counselor in Victor (Ken Marino) trying to score with one of the counselors in Abby (Marisa Ryan).

Wain’s direction is quite straightforward in terms of compositions yet he does display a sense of looseness in the way he directs actors in a scene. Notably as he would create moments that do play into the idea of summer camp where it’s all about doing silly things as well trying to capture the sense of innocence that occurs in summer camp. While there’s a lot of storylines that occur between many characters, Wain does ensure that he finds the time to let many individual stories unfold while adding bits of humor to occur. Sometimes, there’s humor that is absurd in a few sequences which does lead to the climatic talent show where a lot happens. Overall, Wain creates a very funny comedy about the joys and exuberance of one entire day at a Jewish summer camp in 1981.

Cinematographer Ben Weinstein does excellent work with the film‘s colorful photography to display the beauty of the locations set in Maine to capture the beauty of the summer. Editor Meg Reticker does nice work with the editing by creating some unique rhythmic cutting to play out some of the comedy that occurs including a hilarious montage of what some of the camp people do outside of camp. Production designer Mark White, along with set decorator Lisa Scoppa and art director Bryan Hodge, does fantastic work with the look of the summer camp as well as some of the cars to make it look like it‘s 1981.

Costume designer Jill Kliber does great work with the costumes as a lot of it is casual as well as ragged to play out what people would wear in 1981. Sound editor Stephen Altobello does very good work with the sound to capture the energy and atmosphere of the activities that occur in camp. The film’s music by Theodore Shapiro and Craig Wedren is a real delight with its mixture of folk-based music and upbeat rock to play out the sense of nostalgia. Music supervisors Alison Chernick and Paul Parreira create a wonderful soundtrack that features music from Loverboy, KISS, Jefferson Starship, Kenny Loggins, and Rick Springfield.

The casting by Susie Farris is incredible for the rich ensemble that is created for this film. Notable small roles include Judah Friedlander as Gail’s ex-husband, Nina Hellman as the camp nurse Nancy, Kevin Sussman as the eccentric wannabe robot Steve, Joe Lo Truglio as the counselor Neil, Marisa Ryan as the slutty Abby, Samm Levine as the voice of the radio broadcaster Arty, and H. Jon Benjamin as the voice of a mixed vegetables can. Other noteworthy yet funny performances include Elizabeth Banks as the very sexy counselor Lindsay, Molly Shannon as the heartbroken arts and crafts teacher Gail, Amy Poehler as the obsessive drama teacher Susie, Bradley Cooper as Susie’s drama associate Ben, A.D. Miles as Gene’s apprentice Gary, Zak Orth as the fun-loving counselor J.J., and Ken Marino as the sex-obsessed Victor who hopes to get laid at the end of the day.

Michael Ian Black is funny as the very secretive McKinley whom J.J. and Gary wonder what he does and try to get him laid. Christopher Meloni is hilarious as the shell-shocked chef Gene who always says some very crazy things as he is complete denial about his issues. Marguerite Moreau is wonderful as Katie who finds herself connecting with Coop as she is having issues with Andy. Paul Rudd is awesome as the somewhat douchy Andy as he is a guy that just wants to be cool yet treats Katie very poorly. Michael Showalter is delightful as the socially-awkward Coop who tries to woo Katie while doing whatever to win her heart. David Hyde Pierce is fantastic as the astrophysics associate professor Henry who falls for Beth as he tries to find a way to win her while connecting with the kids at the camp. Janeane Garafalo is terrific as Beth as she tries to deal with the chaos of the camp while trying to win over Henry by studying astrophysics.

Wet Hot American Summer is a marvelous comedy from David Wain. Featuring a brilliant ensemble cast and lots of hilarious moments, it’s a film that truly captures the spirit of life during a summer camp. It’s also a film that isn’t afraid to be absurd or off-the-wall while finding time to be sweet and full of heart. In the end, Wet Hot American Summer is an extraordinary film from David Wain.

I actually didn't laugh at this one as much as others did. Some parts were funny, but other parts just felt like they were trying too hard and were centered more towards raunchy sit-com sketches. Still, it's okay. Good review Steve.

This might very well be my favorite comedy of that aughts.

@Dan O.-For me, I don't think they were trying too hard but rather just have a good time and see what comes out. It's kind of like what if Robert Altman did a camping comedy.

@Dave Enkosky-There were so many moments in that film that I found myself laughing really hard. Even in some scenes that I was shocked by. "You taste like a burger, I don't like you anymore".