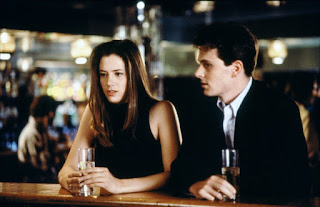 Written and directed by Whit Stillman, Barcelona is the story of two American men who go to Barcelona who deal with cultural differences in Spain as it’s emerging in the aftermath of Fascist-Spain while falling for the women in the country. It’s a film that explores men’s idea about women as well as about themselves in a foreign land. Starring Taylor Nichols, Chris Eigeman, Mira Sorvino, and Tushka Bergen. Barcelona is a charming yet captivating film from Whit Stillman.

In the scheme of finding the right person in life, there is always an idea about what that person should be. For the film’s protagonist in Ted Boynton (Taylor Nichols), it’s about someone who isn’t physically attractive but rather someone who offers something more. Yet, he goes into a lot of his challenges as an American salesman living in Barcelona who is already going through issues in his work thinking he’s about to be fired. Adding to the complication is the unexpected arrival of his cousin Fred (Chris Eigeman) who is a U.S. naval officer trying to handle public relations for the U.S. who are having issues with Spain. While the two men contend with each other over their own ideas of the world while trying to handle this sense of anti-American attitude towards them. They still are able to find women they’re attracted to in Marta (Mira Sorvino) and Montserrat (Tushka Bergen) only to find ways to ruin these relationships through acts of confusion, selfishness, and misplaced idealism.

Whit Stillman’s screenplay is set in the early 1980s where Spain has just come out of post-Francisco Franco era just as it was transitioning to a more democratic state. Yet, the film opens with an American library being bombed that is inter-cut with images of Barcelona in a modern setting while someone throws a stone at an IBM computer store. For Fred who is waiting for his fleet to arrive, he is shocked by this wave of anti-American propaganda that is emerging thinking he is going to help smooth relations. Yet, he is believed to be a spy for the CIA as he is just trying to understand what is happening while being in a relationship with Marta. Still, the story is told largely from Ted’s perspective as he is this neurotic salesman who has done good but is receiving some terrible news that he thinks will lead to his termination.

Upon meeting Montserrat, Ted believes he has found someone that just doesn’t exude the qualities he wants in a woman but is also someone who is incredibly attractive. Yet, she is dating an anti-American journalist named Ramon (Pepe Munne) who writes all of these things that Americans did forcing Ted to finally lash out. It would eventually cause him trouble as it would Fred who becomes paranoid. Still, there are many complications for these two cousins who detest each other at times as Fred is more outgoing while Ted is an introvert. Even as they both have to deal with a lot of the tension towards them as Americans where Europeans despise their consumerist attitudes and other ideals. While Fred tries to defend these ideals, he also believes that maybe the Europeans are right about the Americans though Ted isn’t as sure. The script would change its tone a bit in the third act in a moment that brings the two men together but also provide revelations about everything they had been facing.

Stillman’s direction is truly engaging for the way early 1980s Barcelona is presented with this mixture of a very modern Europe coming into the world with women walking around in red coats while being inter-cut with images of anti-American attitudes. There are some amazing compositions that Stillman creates to present this kind of awkwardness in the ideas of Americans living in Barcelona. Notably as Ted and Fred often speak English for a large portion of the film as they don’t know much Spanish where they get of lot of disdain from Spaniards. While the film features some voice-over narration from Ted as he reflects on the events he encounters while pondering about his ideas on love and life. While he has to contend with the more patriotic Fred who often borrows money without asking or saying the wrong things. Ted still has to be with him so that neither of them could get in trouble about who they are though Ted would often put things in risk.

Stillman uses a lot of medium shots to create a lot of the group conversations and some wide shots for bigger group scenes to capture a sense of togetherness or a scene reflecting one’s isolation such as a visit to Ramon’s house outside of Barcelona. The city of Barcelona is a character in the city as it plays out this world where the old world meets modern Europe as someone like Ted could thrive there. Yet, there is also something off as he is unsure about his place in the world as well as what to do when it comes to love. Stillman’s approach to the humor is quite subtle while having a few elements of slapstick as it brings some energy to the film including an awkward moment when Fred tries to change the music of the party only to realize that he almost ruined the party. Overall, Stillman creates a very fascinating and exhilarating film about love and idealism.

Cinematographer John Thomas does excellent work with the film‘s cinematography from the beautiful daytime exteriors of the city to the gorgeous nighttime exterior scenes at night as well as some wonderful scenery in some of the interior scenes. Editor Christopher Tellefsen does fantastic work with the editing by using rhythmic cuts to capture the humor as well as some dramatic moments while keeping things straightforward for the most part while using fade-outs to help structure the film. Production designer Jose Maria Botines does nice work with the look of the apartment that Ted lives in as well as a few of the places Ted and Fred go to as well as some of the anti-American propaganda that is written on the walls around the city.

Costume designer Edi Giguere does some terrific work with the costumes from the stylish clothes the women wear to the naval uniform that Fred wears. Sound editor Catherine Benedek does superb work with the sound to capture the atmosphere of some of the parties as well as some of the more intense moments in the film such as a couple of bombing scenes. The film’s music by Mark Suozzo is brilliant as it is largely a low-key electronic score to capture the mood of uncertainty in the characters while its soundtrack is a mixture of jazz and Spanish pop music with some American disco that Ted and Montserrat love.

The casting by Billy Hopkins and Simone Reynolds is just amazing as it features some notable small roles from Jack Gilpin as an American consul Fred deals with, Thomas Gibson as a co-worker of Ted whom he feels threatened by, Nuria Badia as a friend of Marta in Aurora, Hellena Schmeid as Aurora’s friend Greta that Ted later meets late in the film, and Pepe Munne as the anti-American journalist Ramon whom Montserrat had a relationship with. Mira Sorvino is wonderful as Marta whom Fred goes out with as she tries to explain to Fred and Ted the anti-American sentiment in Spain while being more outgoing than Montserrat. Tushka Bergen is great as Montserrat as a woman that Ted falls for as she displays the kind of ideals and beauty he craves as she is confused over her own feelings for Ramon.

The duo of Taylor Nichols and Chris Eigeman are the true major highlights of the film in their respective roles as cousins Ted and Fred Boynton. Nichols displays a terrific sense of comic timing as a man who is somewhat socially-awkward in his ideas of love while trying to deal with his own issues as a man and hold on to his own ideas in the world of business. Eigeman is phenomenal as the more outspoken Fred as a man who is baffled by this anti-American sentiment in Spain while dealing with the cultural differences he’s facing as Eigeman also displays a subtle vulnerability to a man whose patriotism is in danger while being accused of being a spy as he also makes some startling revelations on his own life. Nichols and Eigeman together are the heart and soul of the film as they really bring life to characters who could’ve been very inaccessible.

Barcelona is a marvelous film from Whit Stillman that features rich performances from Taylor Nichols and Chris Eigeman. The film is definitely one of the smarter yet more engaging romantic comedies that refuses to play by the rules while not being afraid to speak out against some of the political inequalities of the world. It’s also a film that explores men dealing with their own flaws as they try to win over women from a different country who also hold a very different idea about life. In the end, Barcelona is an exhilarating film from Whit Stillman.

Barcelona has been on my watchlist for ages, the only Whit Stillman I haven't seen. I'm also curious because I've been to Barcelona on holiday. Difficult to find dvd in Europe(which is weird since the film is set in a European city). Wish we had amazon instant over here like you do in the US, so I could rent.

Well, I couldn't the film on DVD nor was it available on TV and I don't have any kind of online instant rental services since I don't have a lot of money at this point. I just did what I needed to do which was go through torrents to find a good transfer of the film.

It's definitely one of his finest so far. I have one more film of his as well as a TV episode that he directed and the Auteurs piece on Stillman will definitely be available next Friday.

I also love Barcelona and considered it my favorite Stillman film for a while. Metropolitan has eclipsed it slightly, but it's still really close. I love the atmosphere that he creates in the gorgeous city. Nichols and Eigeman work really well together, and there are so many funny moments.

It's too bad that it's hard to find. Hopefully Criterion will follow their releases of Metropolitan and The Last Days of Disco and give this one the proper treatment. I have an out-of-print DVD copy but realize it isn't easy to find.

I'm looking forward to the rest of your Stillman posts!

@Dan Heaton-Right now, Metropolitan is my favorite film from Stillman so far. I've already watched The Last Days of Disco which is my 2nd favorite at the moment and on Thursday, I'm going to watch Damsels in Distress while hopefully find the time to watch an episode of Homicide that Stillman directed as I will definitely the post the Auteurs piece on him next Friday.

I really hope Criterion snags Barcelona because it does need a proper DVD/Blu-Ray release.