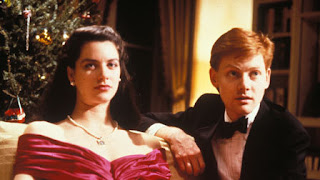 Written and directed by Whit Stillman, Metropolitan is the story about a middle-class student from Princeton who attends an upper-class debutante ball in New York City as he becomes part of a group of young people contemplating about their lives during the course of the Christmas holidays. The film is an exploration into the world of social classes as well as people in the transition of adulthood as they try to figure out what to do about their lives. Starring Carolyn Farina, Edward Clements, Taylor Nichols, Chris Eigeman, and Allison Rutledge-Parisi. Metropolitan is a witty and delightful comedy from Whit Stillman.

When people are about to emerge in adulthood, it is a period of confusion about what they’re expecting in their life. Even if this small group of people are from the upper class as all they do is go to parties and talk about the world around them. For this young man in Tom Townshend (Edward Clements), he is this middle-class Princeton student who has been in the world of social circles yet doesn’t really know much about the upper class though he has a wealthy father he doesn’t see very much. By accidentally meeting this group of young students who sort of know him, he starts to become part of this group of different people who all have a lot to say. Leading the pack is Nick (Chris Eigeman) who is very cynical about the way the world works yet he is intrigued by Tom for the fact that Tom comes from a slightly different background.

Still, Tom does have something to say about literature, art, and social classes as he often finds himself at the ire of the more philosophical Charlie (Taylor Nichols) who also pines for the young woman Audrey (Carolyn Farina) who has a crush on Tom. Yet, Tom is still hung up on his ex-girlfriend Serena (Ellia Thompson) who is dating a young man whom Nick believes is a scumbag based on a story about a young woman who killed herself over him. Whit Stillman’s screenplay is an exploration into this world that people outside of New York and the upper class might not seem to understand. Yet, the people in this film are actually very unique in their viewpoints about the world they live in, their social circles, and the idea of failing as adults.

Stillman uses a lot of dialogue to help carry the story where he reveals a lot of interesting views about the way these self-proclaimed urban-haute bourgeoisie conduct their lives. A lot of it is filled with contradictions about themselves in which Nick describes one of the women a group a slut yet he sleeps with her. Stillman allows the characters to be flawed in order to explain that no one has their life sorted out as Charlie is a guy who likes to talk about everything yet doesn’t know how to approach women. Tom is just as flawed as someone who is very intelligent but he is also a bit foolish about the fact that he is unaware that Audrey is attracted to him. There’s a scene where the two are arguing about Jane Austen where Audrey asks him if he’s read any of Austen’s books and he admits that he doesn’t as he only reads literary criticism.

Stillman’s direction is quite straightforward for the most part in terms of compositions and framing as he does set the film largely in Manhattan. Yet, he does add something to these scenes in the way actors are placed in the frame as well as capturing a discussion that is often happening in the film. There aren’t a lot of stylized camera tricks but Stillman does capture an atmosphere about what goes on in these debutante parties and the after-parties that can go on for hours. Yet, there is that energy that is just enthralling in these discussions and little games that these people play. Even in the moments when they’re just trying to get ready for the next big event as it is about this group though it’s told largely from the perspective of Tom.

The direction also has Stillman finding some subtle moments in the comedy as it’s more through dialogue and bits of action rather than the typical approach where it’s physical. Particularly as it revolves around scenes involving the growing friendship between Tom and Nick where Nick shows Tom the ropes to act a certain way though it’s obvious that Nick isn’t the right guy to do so. Yet, it adds to Tom’s development where he becomes confused on his actions where he would try to redeem himself with some help from an unexpected individual. Still, there is that element of comedy that occurs in the third act in some of the dialogue and presentation that Stillman has created. Overall, Stillman creates a truly exhilarating and smartly-played comedy about life in transition in the upper class world.

Cinematographer John Thomas does excellent work with the film‘s cinematography from the look of Manhattan in the holidays in day and night as well as some of more straightforward lighting in the party scenes. Editor Christopher Tellefsen does brilliant work with the editing from some of the rhythmic cuts in the party scenes and in some intense comedic moments as well as some straightforward cutting in some of the discussion scenes. Costume designer Mary Jane Fort does amazing work with the costumes in the look of the debutante dresses many of the women wear that display a transition in time from the 80s to the 90s.

Sound editor Jay Kessel does terrific work with the sound to capture the atmosphere of the parties as well as the scenes in Manhattan. The film’s music consists of pieces by Mark Suozzo as well as original cuts by Tom Judson, Jock Davis, Billy Jokes, and Joe B. Warner as it is this wide mix of jazz music as well as some orchestral pieces that plays to this world of the upper class.

The film’s cast is just phenomenal as many of them are just newcomers at the time as it includes some notable small roles from Roger W. Kirby that Tom and Charlie meet at a bar, Alice Connorton as Tom’s mother, Linda Gilles as Audrey’s mother, Stephen Uys as a slimy acquaintance of Rick von Sloneker, and Ellia Thompson as Tom’s ex-girlfriend Serena who is dating Rick as she becomes an object of obsession for Tom. Will Kempe is superb as the despicable Rick von Sloneker who despises Nick as he raises questions about whether Nick was really telling the truth about the girl who killed herself. Isabelle Gilles and Dylan Hundley are wonderful in their respective roles as the flirtatious Cynthia and the more sociable Sally while Bryan Leder is very funny as the alcoholic partier Fred as he is often the most low-key member of the group. Allison Rutledge-Parisi is excellent as Audrey’s best friend Jane who observes everything that goes on as some of the drama that occurs forces her to go out on her own.

Taylor Nichols is amazing as the intellectual Charlie as a man who doesn’t really like Tom for his views and such as the two vie for Audrey’s affections where Nichols also displays a sensitivity to someone who doesn’t know how to talk to girls. Carolyn Farina is great as Audrey as a woman who has this idealized idea of love only to find herself confused when Tom is absorbed in his own world. Edward Clements is marvelous as Tom as a young man confused about his place in the world as he tries to figure things out while feeling foolish over his actions as it concerns Audrey whom he starts to care for. Finally, there’s Chris Eigeman in a remarkable performance as Nick as a young cynic who provides some fascinating viewpoints of the world as he is a man full of contradiction and flaws and is aware of it as Eigeman plays this man with lots of charm.

Metropolitan is an incredible film from Whit Stillman. Thanks to a top-notch ensemble cast that includes Chris Eigeman, Taylor Nichols, Carolyn Farina, and Edward Clements. It is a film that is filled with very provocative yet humorous ideas about life and social classes as well as trying to find a place in the world where failure is expected. It’s also a film that allows audiences to connect with people who may be from a very different world but find reveal that they too don’t have it together. In the end, Metropolitan is a tremendous film from Whit Stillman.

Yes! I'm thrilled that you're such a fan of Metropolitan. I love Stillman's work, and his first movie is my favorite. My opinion's only grown over the years about it. The writing is so good and hits on a certain time in your life when you're out of school and trying to figure out what you'd doing. There are so many great lines, including one that inspired my blog name. Great post!

Glad you enjoyed this one! I really liked the dialogue in Metropolitan, and ought to give it a rewatch.
My only minor issue is the ending, which I found slightly predictable. I still like the film, despite that.

Stillman must have had some interesting friends in his youth, semi-autobiographical apparently.

Stillman's writing is sharp, edgy, but also very sympathetic in how it shows all of these richie-riches to be just like you or me, just with heftier wallets. Good review.

@Dan Heaton-Once I heard that line. I realized "oh... so that's where got that name from". Well, with the exception of The Last Days of Disco. I'm not familiar with Stillman but now I'm starting to realize where Wes Anderson and Noah Baumbach got their ideas. I'm eager to check out everything else right now.

@Chris-the dialogue is awesome. I like the ending because it allowed Tom and Charlie to finally come together after being at odds with each other.

@Dan O.-I wouldn't think I could relate to those characters because of their background. Alas, they're just as problematic as us middle-class people. I would love to be part of that gang.