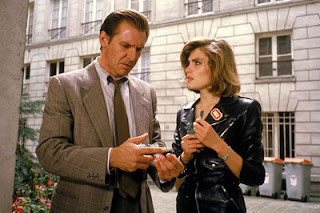 Directed by Roman Polanski and written by Roman Polanski and Gerard Brach with additional contributions by Robert Towne and Jeff Gross, Frantic is the story about an American doctor who travels to Paris to visit his wife as she suddenly disappears prompting him to go on a search for her whereabouts all over the city. The film is a suspense story that revolves a man’s desire to find his wife as he gets help from a young street-wise woman who knows about the dark underworld that is in the city. Starring Harrison Ford, Betty Buckley, John Mahoney, and Emmanuelle Seigner. Frantic is a gripping yet mesmerizing thriller from Roman Polanski.

When the wife of an American doctor is kidnapped in Paris where her husband is trying to find her whereabouts. It is often in the schematics of things for the man to go on the search for his wife by himself. While the film does play into that, it revolves around a suitcase that later belongs to someone else as its owner is a young woman who was supposed to smuggle something in the suitcase unaware of its contents. Once this doctor and young woman figure out why they’re attracting trouble over a suitcase. What occurs is the fact that there is an object in the suitcase that some very important people want as this doctor and young woman are caught in the middle as all the doctor wants is his wife back.

The screenplay by Roman Polanski and Gerard Brach does play with the conventions of a suspense-thriller that often involves kidnapping angles. Yet, they add other elements to the stories such as the fact that the film’s protagonist in Dr. Richard Walker (Harrison Ford) has to deal with not just some of the American bureaucracy involved as it complicates issues in the search for his wife. There’s also all sorts of people that wants something in this suitcase that belongs to this young woman named Michelle (Emmanuelle Seigner). While Michelle admits that she smuggles drugs for a dealer, she has no idea about some of the contents she was carrying in that suitcase. All because Michelle and Dr. Walker’s wife Sondra (Betty Buckley) each got the wrong suitcase, a whole lot of trouble comes in as Sondra is kidnapped and Dr. Walker goes on this frantic search to find her.

The script does explore the idea of how police and these American political issues complicate things for Dr. Walker as they’re more concerned about other things. Notably as it would also involve various people where Dr. Walker and Michelle realize what they’re after. For Dr. Walker, he can use this object as a bargaining chip to get his wife back while Michelle just wants money for bringing the object to them. Still, they have to deal with forces who are very dangerous and this object, which is a Macguffin, is what everyone else is after where Dr. Walker would finally take control of this deal.

Polanski’s direction is quite entrancing for the way he explores the world of kidnapping and a man’s desire to retrieve his wife. Notably as he creates a lot of interesting compositions to establish the sense of mystery that occurs in the film. Shot on location in Paris, Polanski creates something where it does involve this American who doesn’t speak much French as he’s either dismissed or misinterpreted by the locals. Yet, he does get help from a few people who understand what he’s going through. Polanski uses close-ups to unveil some of the tribulations that Dr. Walker is going through as well as some eerie moments in the nighttime moments where Dr. Walker is trying to uncover the mystery. In this world full of nightclubs filled with lots of reggae music, Dr. Walker is definitely in a world that he doesn’t really know much about as it is a very seedy side of Paris.

Polanski’s direction also allows the film to have a bit of humor such as a scene of Dr. Walker walking on the roof of Michelle’s apartment with the suitcase that reveals his sense of awkwardness while some of the humor also comes from Michelle who is just a young woman that likes to chew bubblegum. Polanski also create moments where he allows the characters to improvise a bit to get out of situations while maintaining that sense of suspense that is prevalent through the film. Notably in the final showdown involving Dr. Walker, Michelle and the people who has Sondra where it is about who gains what yet there are also forces that want something as Polanski maintains that intensity in the suspense. Overall, Polanski crafts a very engaging and chilling suspense film that doesn’t lose sight of its intentions as well as its characters.

Costume designer Anthony Powell does wonderful work with the costumes from the stylish clothes of Michelle to the more reserved look of Dr. Walker. Sound editor Laurent Quaglio does fantastic work with the sound to capture the atmosphere of the nightclubs as well as some of the eerie moments in the film. The film’s music by Ennio Morricone is phenomenal as Morricone creates this haunting score filled with ominous string arrangements with a bit of guitar in the mix to play out some of its suspense and drama as it’s one of his more overlooked scores in his revered career. The soundtrack features a mix of jazz and electro-pop music with a dash of reggae as it includes contributions by Simply Red and Grace Jones to play out the sense of youth that Michelle revels in.

The film’s cast is amazing as it features some notable small roles from Dominique Pinon as a wino who witnessed what happened to Sondra, Dominique Vitron as the hotel desk clerk, Jacques Ciron as the hotel manager, Jimmie Ray Weeks and John Mahoney as U.S. embassy officials, Thomas M. Pollard as a Rastafarian that Dr. Walker meets, David Huddleston as a colleague Dr. Walker meets at the airport, and Yorgo Voyagis as the kidnapper. Betty Buckley is terrific as Dr. Walker’s wife Sondra who becomes a victim of troubling circumstances in order to get an object that Michelle was supposed to deliver.

Emmanuelle Seigner is superb as the street-wise Michelle who helps Dr. Walker navigate through the streets of Paris to find Sondra while being a woman with her own agenda as it’s a wonderful debut performance for the actress. Finally, there’s Harrison Ford in an incredible performance as Dr. Richard Walker as a man who is just determined to find his wife where Ford brings the every-man into the character as well as a vulnerability that allows him to be very engaging in the plight that he’s facing.

Frantic is a marvelous suspense-thriller from Roman Polanski that is highlighted by the brilliant performances from Harrison Ford and Emmanuelle Seigner. While it’s a thriller that does play to conventional tactics, Polanski is able to make it very engaging as well as bring a sense of human drama that is prevalent through the film. It’s also one of Polanski’s more overlooked films for the fact that he is able to create something that does more for the suspense genre. In the end, Frantic is a masterfully-crafted thriller from Roman Polanski.

A great film that i have not seen in years. Going to have to give this one a re-watch soon. Nice review

It's a film that I think deserves a re-watch as I think it's one of Polanski's more underrated films.

I wish this quiet little film was more well known.

@TonyDale-Agreed as I think it's become one of those films that has aged better over the years and showcases why Roman Polanski is a true master of suspense.