A Story of Floating Weeds 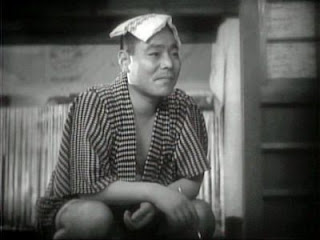 Directed by Yasujiro Ozu and written by Ozu and Tadao Ikeda from a story by James Maki, A Story of Floating Weeds is the story about an aging actor who arrives to a small town with his troupe of actors where he meets his old lover and their illegitimate son much to dismay of his current lover. The film is an exploration into a man’s desire to get to know the son he barely knew while trying to give his time towards the people he abandoned while unknowingly abandoning those who also need him. Starring Takeshi Sakamoto, Chouko Iida, Koji Mitsui, and Yoshiko Tsubouchi. A Story of Floating Weeds is a majestic yet heartbreaking film from Yasujiro Ozu.

The film is simple story about an actor, who leads a traveling acting troupe, who arrives at a small town to do a show where yet what he wants to do is see an old lover and his illegitimate son. While wanting to get to know this young man whom he has provided money for so he can get an education and the chance to do something great. The man’s lover feels neglected as she realizes what’s going as she goads a young actress from the troupe to seduce the man’s son in order to create chaos. Instead, things don’t go as planned leaving the man to face all of the trouble he’s created in his past and the life that he has now. It’s all part of a world in which a man is trying to find redemption for his past actions while he’s unaware of the trouble he’s creating in his troupe of actors as they’re dealing with inactivity as well as a lack of money.

The screenplay explores the world of a man trying to do right to the family he had abandoned though he is known to his son as his uncle. Yet, Kihachi Ichikawa (Takeshi Sakamoto) just wants to his son to know that his father isn’t some failure by claiming that his real father was a civil servant who had died. His old lover Otsune (Chouko Iida) would maintain that lie to not just protect Kihachi from shame but also for their son Shinkichi (Koji Mitsui). Still, Shinkichi is happy to see the man he calls his uncle as they share moments together as if they’re father and son. For Kihachi’s current mistress Otaka (Rieko Yagumo), the discovery of Kihachi’s other life is shocking as she has no idea how to react to it as it later becomes a form of jealousy.

By getting the young actress Otoki (Yoshiko Tsubouchi) to seduce Shinkichi, she hopes that it would ruin things for Kihachi so she can get him back. Yet, the script doesn’t allow things to play out as what would’ve been expected in order to slowly create a moment of anxiety for Kihachi as he realizes what’s going on. Truths do get unveiled but it all has to do with what Kihachi wants for his son as well as the fact that Kihachi doesn’t want his son to endure the same struggle he went through as a traveling actor. Even as his troupe realizes the sacrifices he’s made for his son and why he’s been absent as of late yet the outcome would be one that Kihachi would have to live with.

The direction of Yasujiro Ozu is quite simple in the way he frames the film as he is often known for creating dazzling images while never moving the camera to explore any kind of action. Instead, he maintains this air of simplicity in the direction by just capturing all of the drama that is happening as well as some of the kabuki performances that is happening. Still, there is a sense of beauty to the way Ozu frames a shot or a scene where he says a lot by doing so little. Even in moments such as Kihachi and Shinkichi fishing on a river or the drama that occurs in the third act where Kihachi learns of Otaka’s plans. Ozu’s approach to drama is very direct in the way he frames the actors in a scene as well as to display the sense of emotion that is happening. Overall, Ozu creates a very poignant yet exhilarating film about redemption and family.

Cinematographer/editor Hideo Mohara does brilliant work with the film‘s understated black-and-white photography to play out the sense of simplicity in its small town setting with its gorgeous daytime exterior scenes to the scenes set at night with some amazing lighting by Toshimichi Nakajima for some of the film‘s interiors. Mohara’s editing is quite simple but effective to play out the drama that happens while maintaining a methodical approach to the pacing. Art director Toshio Hamada does wonderful work with the set pieces from the theater the actors work at to the home of Otsune. The film’s score by Donald Sosin for the film’s restored version is superb for its piano-based score to play out some of the drama as well as its light-hearted moments.

The film’s cast is excellent as it features some notable small roles from Tokkan Kozo as a child actor of the troupe and Reiko Tani as the boy’s father. Yoshiko Tsubouchi is wonderful as the young actress Otoki who is goaded by Otaka to seduce Shinkichi only for things to become more complicated than she realizes. Rieko Yagumo is terrific as Otaka as Kihachi’s mistress who feels neglected over Kihachi’s absence only to feel jealous over the other life that he has. Koji Mitsui is fantastic as Shinkichi as a young man who has a lot going for him as he’s happy to see the man he thinks is his uncle as they share moments that are just lovely to watch.

Chouko Iida is amazing as Kihachi’s former lover Otsune as a woman who is happy to see Kihachi while trying to protect all of the secrets she and Kihachi have been carrying. Finally, there’s Takeshi Sakamoto in a marvelous performance as Kihachi as he displays a great sensitivity to a man trying to connect with the son he barely knew while dealing with all of the anguish he’s made for himself.

A Story of Floating Weeds is a majestically-rich film from Yasujiro Ozu. Armed with a great cast and a captivating story about the desire to connect as well as dealing with regrets. The film is definitely one of Ozu’s finest as well as one of the key great films of the silent film era. In the end, A Story of Floating Weeds is a remarkable film from Yasujiro Ozu.

Yasujiro Ozu Films: (Sword of Penitence) - (Days of Youth) - Tokyo Chorus - I Was Born, But… - (Dragnet Girl) - Passing Fancy - (An Inn in Tokyo) - (The Only Son) - (What Did the Lady Forget?) - (Brothers and Sisters of the Toda Family) - (There Was a Father) - Record of a Tenement Gentleman - (A Hen in the Wind) - Late Spring - Early Summer - (The Flavor of Green Tea Over Rice) - Tokyo Story - Early Spring - Tokyo Twilight - (Equinox Flower) - Good Morning - Floating Weeds - Late Autumn - The End of Summer - An Autumn Afternoon

My favorite Ozu so far is Tokyo Story. I was born, but...(1932) is another Ozu that I connected to. Tokyo Twilight (1957) had a dull first hour-and memorable last hour.
An Autumn Afternoon (1962) and Floating Weeds (1959) I found both a bit slow. I'm curious about Floating Weeds as a silent film.
I'm planning to see Flavor Of Green Tea Over Rice (1952)-which a blogger(cinephiliaque) has in their top 100.
Ozu has his own unique style, but I doubt that many outside of cinephiles would love him, because of the deliberately slow pace.

Tokyo Story is still my favorite Ozu film so far as I just saw Floating Weeds earlier today and will see Early Spring on Tuesday. He's someone I think every film buff should see because he just creates something that doesn't need to be exaggerated. I think filmmakers want to exaggerate or embellish things when Ozu is all about simplicity.

Brody Beau said...
This comment has been removed by a blog administrator.
1:26 AM