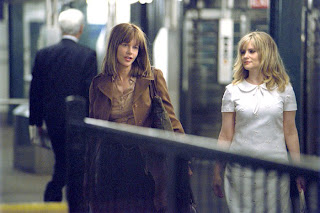 Based on the novel by Susanna Moore, In the Cut is the story about an English teacher who is haunted by a series of gruesome murders as she falls for a detective who is investigating the murder. Directed by Jane Campion and screenplay by Campion and Susanna Moore, the film is an exploration into a woman dealing with her own sexual desires while dealing with a series of murders involving women. Starring Meg Ryan, Mark Ruffalo, Jennifer Jason Leigh, Patrice O’Neal, and Kevin Bacon. In the Cut is an entrancing but very meandering thriller from Jane Campion.

In the schematic of thrillers, if it involves something where a character learns about a murder and believes that she’s falling for someone who could be a suspect. The film does play into that schematic as it revolves around this high school English teacher living in Manhattan where she’s questioned about a series of murders nearby her neighborhood. One of the people Frannie Avery (Meg Ryan) is questioned by is a brash detective named Malloy (Mark Ruffalo) who carries a small tattoo in his right wrist as she suspects that he could be the killer all because she saw someone with that tattoo getting a blow job at a bar she was at. Still, Malloy is investigating these deaths where the two also play a game of sexual dominance as the often repressed Frannie is intrigued by Malloy’s dominance.

The screenplay that Jane Campion and its novelist Susanna Moore create tries to play into the world of a woman seeking someone who can fulfill her needs yet there is this air of mystery into the murders that is happening around her. There are some aspects of the story that raises interests but it often meanders into lots of discussion of sexual interplay while the mystery itself starts to lose some steam in its suspense. Notably as the deaths have Frannie becoming suspicious of Malloy as well as a few other people including a student named Cornelius (Sharrieff Pugh) and a former boyfriend (Kevin Bacon) become suspects. Yet, the mystery does become evident in the third when a key supporting character is killed but the way things are handled and who the killer really ends up becoming uninspiring.

Campion’s direction is quite stylish though sometimes, Campion’s stylish approach tends to overwhelm things as she uses a lot of blurry images as backdrops. While she does use some interesting framing and close-ups to help capture the drama including some of the sexual interplay between Frannie and Malloy. Campion doesn’t do enough to build up the suspense as there’s an unevenness to the film where it wants to be a sexual drama but it also wants to be a suspense film. Both end up becoming very tedious while characters like Frannie’s former boyfriend and her sister Pauline (Jennifer Jason Leigh) just pop up every now and then not given anything to do. Overall, Campion creates a film that isn’t sure what it wants to be while not doing enough to make its suspense be impact for its ending.

Cinematographer Dion Bebe does excellent work with the film‘s colorful cinematography that is awash with lots of lush colors for some of the film‘s daytime setting in New York City along with some low-key lights for the scenes at night. Editor Alexandre de Franceschi does nice work with the editing by using jump cuts to play out some of the drama as well as slower ones for the suspenseful moments. Production designer David Brisbin, along with set decorator Andrew Baseman and art director David Stein, does terrific work with the look of Frannie‘s apartment to showcase her bookish lifestyle while creating a more wilder look for Pauline‘s apartment.

Costume designer Beatrix Aruna Pasztor does pretty good work with the dresses that the ladies wear to display their personalities. Sound designer Peter Miller does some wonderful work with the sound to capture the atmosphere of the strip club that Pauline works at as well as the scenes in the city. The film’s music by Hilmar Orn Hilmarsson is superb for its low-key yet haunting orchestral score that plays out some of the drama that occurs. Music supervisor Laurie Parker creates a fantastic soundtrack of music that features songs performed by Annie Lennox, Macy Gray, Diana Krall, the Temptations, and Dusty Springfield.

The casting by Kerry Barden, Mark Bennett, Billy Hopkins, and Suzanne Smith do some stellar work with the cast as it features some noteworthy small performances from Patrice O‘Neal as a club bouncer, Sharrieff Pugh as a student of Frannie‘s, and Nick Damici as Malloy‘s sexist partner Rodriguez. Kevin Bacon is OK as Frannie’s former boyfriend who just pops in every once in a while trying to stalk her where his character has no depth. Jennifer Jason Leigh is good as Frannie’s sister Pauline though she isn’t given much to do but show up and tell Frannie how to flirt with a guy.

Mark Ruffalo is excellent as the ambiguous detective Malloy who is a man that has a unique idea about women while often being a bit charming at times as well as brooding that adds a layer to his performance. Finally, there’s Meg Ryan as Frannie where Ryan isn’t bad but doesn’t really do much to make her character more interesting. In fact, she’s very miscast in a role that requires some dramatic weight and Ryan just couldn’t rise up to the expectations though the script doesn’t really do her any favors either.

In the Cut is a very disappointing and off-the-wall thriller from Jane Campion. Despite some moments in the technical department and Mark Ruffalo’s performance, it’s a film that doesn’t do enough to make it into an interesting thriller while spending too much time exploring a woman’s sexual fulfillment. It’s also a film that could’ve been more interesting if it took more time to invest in the mystery as well as putting an actress who can get her hands more dirty into a film like this. In the end, In the Cut just doesn’t make the cut as far as someone that is known for doing so much more in Jane Campion.

Jane Campion Films: Sweetie - An Angel at My Table - The Piano - The Portrait of a Lady - Holy Smoke! - Bright Star - Top of the Lake (TV miniseries) - (Top of the Lake-China Girl) - The Power of the Dog - The Auteurs #25: Jane Campion

I'll admit that it isn't an amazing flick, but Ruffalo and Ryan are amazing and really keep this flick moving. Just wish it didn't get so conventional and stupid by the end. Nice review.

Yeah, that was dumb-ass ending. It was kind of obvious in the end and that's what made the film so disappointing.