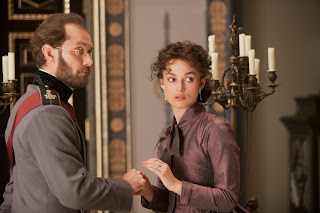 Based on the novel by Leo Tolstoy, Anna Karenina is the story of the titular socialite, who is the wife of a statesman, who begins an affair with an officer in late 19th Century Russia. Directed by Joe Wright and screenplay by Tom Stoppard, the film is a look into the life of a woman as she tries to find love only to be ruined by her affair as Keira Knightley plays the title role. Also starring Jude Law, Aaron Johnson, Alicia Vikander, Matthew McFayden, Domhnall Gleeson, Kelly MacDonald, Ruth Wilson, Shirley Henderson, Olivia Williams, and Emily Watson. Anna Karenina is a beautiful yet vapid film from Joe Wright.

Set in 1874 in Imperial Russia, the film is an exploration into the life of this aristocratic woman who falls for a cavalry officer where their affair becomes scandalous. Yet, the film is an exploration into many ideas of love as well as infidelity where the latter showcases a woman’s decision in being with this officer named Count Alexei Vronsky (Aaron Johnson) where they fall in love despite the fact that she’s married to a statesman in Count Alexei Karenin (Jude Law). Yet, Vronsky is notorious for wooing many women including Anna’s sister-in-law Kitty (Alicia Vikander) who is also pursued by Konstatin Levin (Domhnall Gleeson) who tries to deal with his ideas about true love and such. All of which is told in a very broad but messy story that doesn’t hold itself together.

Tom Stoppard’s screenplay has this narrative where there’s a lot of characters involved where it has this unique structure that would play Anna’s fall from grace. Yet, it has these other subplots involving her brother Stiva (Matthew McFayden) trying to help Levin while having his own extramarital affairs as well the stuff involving Levin. The first act explores Anna’s marriage to Count Karenin where it’s one where there’s not much communication yet there is love until Anna meets Count Vronsky. The second act is about Anna and Count Vronsky’s love affair and the scandal that it creates where Karenin becomes embarrassed. The third act is about Anna’s attempt to return to society where she is disapproved by those around her while her relationship with Vronsky starts to fall apart.

Notably as the script reveals a lot about Vronsky’s appetite for women which adds to Anna’s insecurities yet neither character become interesting as they have range of emotions that drags the story. Even as the script would shift into what Count Karenin is doing as he feels humiliated as well as the stuff about Levin who feels lost as he tries to comprehend all of the ideas of love. Notably as there’s people like Stiva’s wife Dolly (Kelly MacDonald) who isn’t sure about wanting Stiva back or Vronsky’s cousin Betsy (Ruth Wilson) whose appearances would raise questions about Vronsky’s devotion to Anna. All of which just adds to the messiness of the script as it gets to the point where there’s too many characters to follow and how important they are to the story.

Joe Wright’s direction is unique in the way he presents the story where he wants to go for something that is theatrical where most of the film is presented in a theater. A lot of which seems to play into a world that seems artificial and sort of removed from reality to portray Anna’s idea of the world where things aren’t cold and such. Even in moments of the film where some of the action takes place backstage or above the stage where people will freeze while she and Vronsky are moving. It all plays to that world where Anna and those around her seem to thrive in where there’s even a horse race that occurs on the stage where Anna is watching from the booth. It’s these moments where the idea of fantasy and reality would collide as many of the moments set in the Karenin home is a mixture of that.

There’s also moments where the fantasy is replaced by reality which plays into the Levin’s plight as he goes to the country to deal with some family matters as well as resigning to the fate that might happen to him. These are moments that are all interesting but it also adds to the confusing nature of the story where Wright wants to do both. It unfortunately creates this idea of style over substance where there’s all of this gorgeous imagery with some amazing tracking shots and moments where everything happens in one take. Yet, it doesn’t do enough to really engage the audience into the story despite its emphasis on the themes of adultery and love where its end result is a bit mixed. Overall, Wright crafts a very lavish but lifeless film about a woman’s affair that led to scandal and the loss of her identity.

Cinematographer Seamus McGarvey does fantastic work with the film‘s cinematography from the gorgeous look of the exterior locations to some of the lighting in the theater stage and some of its interior settings. Editor Melanie Ann Oliver does excellent work with the editing from the use of montages and fast-cuts for the dancing scenes as well as some smooth transitions for the fantasy-reality scenes. Production designer Sarah Greenwood, with set decorator Katie Spencer and supervising art director Niall Moroney, does amazing work with the set pieces from the look of the Karenin home to the look of the stage where a lot of the action occurs.

Costume designer Jacqueline Durran does brilliant work with the costumes from the uniforms that Vronsky wears to the many dresses that many of the female characters wear including Anna. Hair/makeup designer Ivana Primorac does dazzling work with the hair/makeup to complement the different looks of the many female characters. Sound editors Craig Berkey and Becki Ponting do superb work with the sound to capture the intimacy of the theatrical settings as well as the broad sound of the scenes set at the train station. The film’s music by Dario Marianelli is spectacular for its heavy yet effective orchestral score to play out the romance and drama while also using some low-key moments and some themes for the different characters including a humorous one for Stiva.

The casting by Dixie Chassay and Jina Jay is terrific for the ensemble that was created as it features some notable small roles from Holliday Grainger as a baroness friend of Vronsky, Michelle Dockery as a friend of Anna, Shirley Henderson as a disapproving madam at a scene late in the film, Raphael Personnaz as Vronsky’s brother, Oskar McNamara as Anna and Count Karenin’s son Serhoza, Alexandra Roach as the Countess Nordstron that Vronsky tries to woo early in the film, and Emily Watson in a chilling performance as the Countess Ivanova who observes Anna’s behaviors as she would eventually tell Karenin about what is going on. Ruth Williams is wonderful as the mysterious Princess Betsy who tries to get her cousin Vronsky to steer him away from Anna while Olivia Williams is excellent as Vronsky’s mother Countess Vronskaya who is very disapproving about her son’s relationship with Anna.

Matthew McFayden is fantastic as Anna’s brother Stiva who tries to deal with the chaos in his own life while helping out Levin. Kelly MacDonald is superb as Stiva’s wife Dolly who deals with her husband’s infidelity while helping out her sister Kitty to find love. Alicia Vikander is remarkable as Kitty as a young woman who is supposed to marry Vronsky only to lose herself in a whirlwind of many prospects while being courted by the more kind Levin. Domhnall Gleeson is marvelous as Levin as a young man who is in love with Kitty only to lose her to her more revered prospects as he tries to deal with his idea of love as well as his family who are dealing with their own troubles. Jude Law is amazing as Count Karenin as a man who is devoted to his service for his country while trying to make time for his family only to learn the truth about what Anna is doing as he tries to comprehend everything as well as make some decisions about what to do for his son.

Aaron Johnson is quite bland as Count Vronsky where Johnson doesn’t do enough to make his character interesting as he spend some of his time being aloof or doe-eyed where it comes across as very uninspiring to watch. Keira Knightley is pretty terrible as the titular character as she spends some of her time either overacting in some of the dramatic moments or just underplaying where she often wears a veil and gaze. It’s a performance that doesn’t allow Knightley to really do more for the character as it has her just being sad and confused most of the time though she’s more effective in the happier moments as it’s not one of her best works.

Despite its amazing supporting cast and technical work, Anna Karenina is a very disappointing film from Joe Wright. Due to the uninspiring leading performances of Keira Knightley and Aaron Johnson as well as Joe Wright’s emphasis on style over substance and Tom Stoppard’s messy script. It’s a film that had all of the tools to be something quite grand and engaging only to end up being dull and flat. In the end, Anna Karenina is a very underwhelming film from Joe Wright.

I've avoided this one so far, judging from your review, I think I made the correct choice.
I admire the effort of trying to bring it to the screen, but probably such a long book should be a mini-series instead.

It's not a total waste of time where you will admire the visuals and some of the performances. Yet, it's just that it's a fucking a mess and the leads aren't very good. I was very disappointed with this film. It's not as bad as The Soloist but it's still just very dull.

I really want to watch this movie despite the many disappointed opinions I've heard so far. It just seems sort of intriguing. We'll see.

@Mette-It has moments that are intriguing and fun to watch but it is very disappointing as a whole.

Good review. It's all style, and not much story. And even while it does start off with plenty of promise in the first 30 minutes, it all goes South for the next hour-and-a-half and just bored me to tears, even though Knightley and Johnson made for a very sexy couple.

@Dan O-It was a waste of an interesting story where there were so many ways it can go but it didn't really go anywhere. Knightley and Johnson as a sexy couple? No. Especially compared to Jude Law who is motherfuckin' sexy!!!! I was more distracted by Knightley's teeth.

The visuals for this at the start were really cool and I liked the way they made this look like a stage play, but I agree that the style alone can't save this from being dull. Why did they treat Jude Law's character as the bad guy when he was right for the entire movie. Nice Review

@The Vern-Exactly. They wanted him to him to be the bad guy when really, it was Count Vronsky that was the real villain of the story.

It was a terrible film. I found myself being bored by the end of the second act where fortunately, I was able to stop because my Dad wanted to watch the game and I decided to watch the rest of it later on and I realized that I wasn't really missing much.