A Love Song for Bobby Long 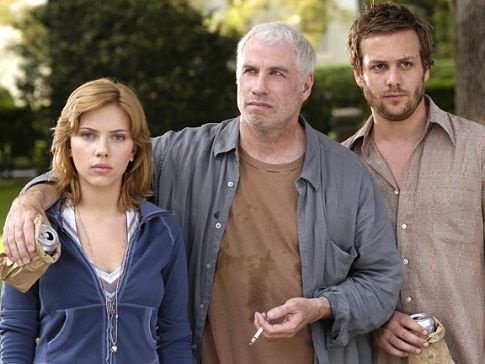 Based on the novel Off Magazine Street by Ronald Everett Capps, A Love Song for Bobby Long is the story of an 18-year old high school dropout who travels to New Orleans following her mother’s death to reclaim her mother’s home as she is forced to deal with an alcoholic literary professor and his protégé as she reluctantly lives with them. Written for the screen and directed by Shainee Gabel, the film is an exploration of a young woman trying to know the mother she had never really knew as well as the two men who knew her. Starring John Travolta, Scarlett Johansson, Gabriel Macht, Deborah Kara Unger, Clayne Crawford, and Dane Rhodes. A Love Song for Bobby Long is a compelling yet flawed film from Shainee Gabel.

The film plays into the life of a woman who had just died as her estranged 18-year old daughter travels from Panama City, Florida to New Orleans to get the house her mother lived in only to find out that two men are already living there. In the process, the three form a very dysfunctional yet unconventional family where the young woman Purslane (Scarlett Johansson) deals with Bobby Long (John Travolta) and his antics though she does befriend his protégé Lawson Pines (Gabriel Macht) who is trying write a novel. Yet, Long would get Purslane to finish high school since he knows she has more to offer even though Long didn’t want Purslane to be at the house only to realize that he and Lawson do need her where the two attempt to sober up. In the process, Purslane would learn more about her mother through Long, Pines, and other friends but also about herself.

Shainee Gabel’s screenplay does create a story that is engaging in the way a young woman tries to find out who she is as well as her estranged mother that she never really knew. Even as she arrives to New Orleans days after her mother’s funeral because her inept boyfriend didn’t give her the mail where she isn’t sure about sharing the house with two alcoholics. While it’s a film that really revolves around Purslane, it’s told from the perspective of Lawson where it’s a device that has its moment but often rambles at time where it really lags the story down. Especially as some scenes tend to go on for too long where Gabel wants to reveal more about the characters but it ends being very expository. Though things do get interesting in the first two acts, it does fall apart in the third act due to a lot of dramatic scenarios and some revelations that end up being very obvious.

Gabel’s direction definitely has some very entrancing moments in the way it captures the city of New Orleans through its many locations and weather climates. There are some beautiful compositions in the way Gabel captures the city which is a character of the film while Gabel also creates some unique close-ups and medium shots that play into the dramatic aspects of the film. There are also some moments of humor in the film as Gabel tries to keep things moving but some scenes are overlong at times which definitely drag the film. Especially as it is clear that some scenes needed some trimming where Gabel really wants to broaden the story only for things to get a little excessive. Overall, Gabel creates a fine but very messy and uneven film about three people sharing a house in New Orleans.

Cinematographer Elliot Davis does amazing work with the film‘s gorgeous cinematography to capture the different climates of New Orleans from its hot and sunny days to its moments in the rain as well as the interior lighting set in the bars and in the house. Editors Lisa Fruchtman and Lee Percy do some excellent work in the editing in capturing some of the dramatic moments along with a few montages though some scenes end up being very long and drag the film at times. Production designer Sharon Lomofsky, with set decorator Leonard R. Spears and art director Adele Plauche, does fantastic work with the look of the house the three characters live in along with some of the look of the bars and other places in New Orleans.

Costume designer Jill M. Ohanneson does terrific work with the costumes from the ragged look of the men to the different array of clothes that Purslane would wear including some of the dresses. Sound editor Stephen Hunter Flick does superb work with the sound in some of the moments in the film‘s locations along with some scenes at the bar. The film’s music by Nathan Larson is brilliant for its low-key score filled with guitars and ambient textures while music supervisor Jim Black brings in an incredible soundtrack that features a diverse array of music from indie, shoegaze, blues, and jazz from artists like Nada Surf, Los Lobos, Trespasser William, Helen Humes, Giant Drag, Lonnie Pitchford, and Grayson Capps.

The casting by Sig de Miguel, Lisa Me Fincannon, Amanda Mackey Johnson, Cathy Sandrich, and Wendy Weidman are wonderful as it features some notable small roles from Dave Jensen as a musician friend of Purslane’s mother, Clayne Crawford as Purslane’s idiotic redneck boyfriend who would show up in the third act to cause trouble, and Deborah Kara Unger in a decent but very underwritten role as Lawson’s girlfriend Georgianna. Dane Rhodes is fantastic as Cecil who knew Purslane’s mother very well as it’s a very sensitive and kind performance that could’ve been expanded more. Gabriel Macht is pretty good as Lawson Pines as a writer trying to make a book where Macht has his moments but never really enough to flesh his character out more.

John Travolta is alright as the once brilliant literary professor Bobby Long where Travolta does have some charisma into the role but it’s a performance where Travolta tries very hard to be serious in the way he quotes a lot of literature where he is trying to be Marlon Brando at times and it’s a very jarring performance to watch. Finally, there’s Scarlett Johansson in a remarkable performance as Purslane Will as this young woman with no direction who arrives to New Orleans to get her inheritance as she tries to figure out what to do with the help of two alcoholic men as it’s a role that has Johansson be filled with a sense of torment and guilt over not knowing her mother as well as a restraint in the way she tries to hold her emotions as it’s one of her finest performances.

While it is a very flawed film that tends to be a bit too long and has some serious pacing issues, A Love Song for Bobby Long is still a worthwhile film from Shainee Gabel thanks in part to the mesmerizing performance of Scarlett Johansson. While it has some very beautiful images thanks to Elliot Davis’ cinematography and a brilliant soundtrack, it’s a film that has moments that are engaging as well as the way it captures pre-Hurricane Katrina New Orleans. In the end, A Love Song for Bobby Long is a pretty good yet uneven film from Shainee Gabel.

Johansson is exceptional here! Loved this film a lot when I first saw it, but as it's rested it's flaws become more obvious, like Travolta's pining for attention, but Johansson is far from a flaw. She's the reason to see this film!

Scarlett is the reason to see this along with cinematography, art direction, and the soundtrack. Yeah, it's a very flawed film where Travolta tries to be Brando but Johansson ends up out-acting him in the process. That's why she's the best actress working today.

Hmmm, it doesn't sound like a role that suits Travolta, maybe that's why it didn't work so well. I'm curious about Gabriel Macht, never seen him in anything but it seems that lots of people like him in the series SUITS.

@ruth-Travolta is best when he plays a role with charm and can be cool. This is not one of those roles. I think Tommy Lee Jones would've been a better choice. As for Gabriel Macht. I don't watch Suits but I have seen him in some very bad films where he is often quite bland and smug at times while the worst thing he did is The Spirit where he is the lead and it was awful but he was just one of many things in that film that just sucked ass.

I agree about the cinematography. The film really makes New Orleans look so beautiful, and I felt like jumping on a plane and visiting.

ps
Was wondering if you have done your top 10 songs for each year, going back to the 60s? I've been doing that recently.

@Chris-It's been a very, very long time since I've been to New Orleans as I love that city. So full of culture and of course, the beigniets. Oh, I want to eat those.

No, I haven't done a list of the best songs of the 60s or the 70s. It's just too hard to do because there's so many and you end up overlooking other greats.