Originally Written and Posted at Epinions.com on 3/3/07 w/ Additional Edits. 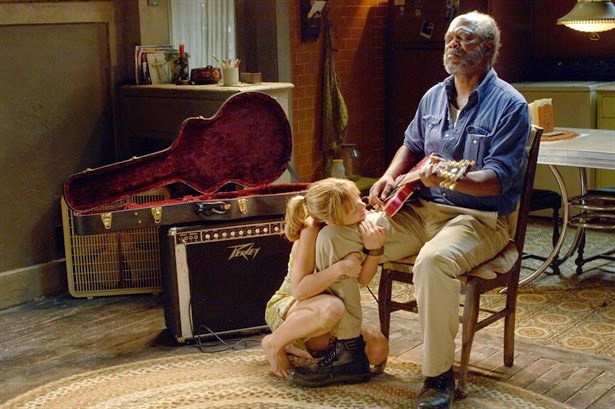 Written and directed by Craig Brewer, Black Snake Moan is the story of an aging, God-fearing bluesman whose encounter with a young and rowdy woman has her trying to save her from wicked ways after being found beaten on the road. The film is an exploration into the world of the American South at its most grimy as it plays to the world of the American blues. Starring Samuel L. Jackson, Christina Ricci, Justin Timberlake, S. Epatha Merkerson, David Banner, and John Cothran Jr. Black Snake Moan is a dirty, funny, and whimsical film from Craig Brewer.

When her boyfriend Ronnie (Justin Timberlake) is set to leave for a duty in the national guard, Rae (Christina Ricci) begs him not to leave as Ronnie tells her he will return. Unfortunately, Ronnie's departure doesn't sit well with Rae whose strange behavior has already given her as a reputation for being the town’s loose, white-trash hussy. In the same town, an aging bluesman named Lazarus (Samuel L. Jackson) is dealing with the split from his wife Rose (Adriane Lenox) who is leaving him for his brother. Lazarus confides in his friend/preacher R.L. (John Cothran Jr.) while nursing a wounded heart. Rae meanwhile, continues to go into her rowdy ways having sex with many men including local dealer Tehronne (David Banner) and Ronnie's friend Gill (Michael Raymond-James). After a wild night, Rae gets beat up and is left onto the side of the road where the following morning, Lazarus finds her.

Trying to get her better, Lazarus gets more than he bargains for when she acts strangely around him and often going into surreal moments of crawling around in her underwear and shirt. Lazarus gets medicine from local friend Angela (S. Epatha Merkerson) while he learns from Tehronne on who she is. Still behaving crazily, Lazarus calms her where he decides to do something very crazy. When Rae wakes up and tries to leave, she learns that she has a 40-pound chain around her that is connected to his old radiator. Lazarus hopes to cure her from her wicked ways and make her into a decent girl despite her attempts to seduce him and such. Days go by when a local boy named Lincoln (Neimus K. Williams) visits Lazarus' farm to get some vegetables where he finds Rae. Lazarus returns to see that Rae still needs work as R.L. also learns of what Lazarus is trying to do. With only Lincoln and R.L. knowing what's going on, they keep it a secret from the rest of the town.

Discharged due to anxiety, Ronnie returns home to find that Rae hasn't been returning his calls or been at home. With Rae starting to act more civil, she still doesn't feel well due to the demons where she confronts her mother Sandy (Kim Richards). Only Lazarus comforts her with his music as he gains the courage to play in public again with support from Rae and R.L. With Rae starting to gain some peace, she also has to realize her own role as well as what to bring for Ronnie.

Whereas Hustle & Flow explores the world of Southern hip-hop, Black Snake Moan is really more like a blues album set in the roots of the South. Craig Brewer fully understands his environment and how the music fits in to a place in the middle of Tennessee. The film opens with footage of an old bluesman talking about sin and loose women. Yet, Black Snake Moan shares the same theme of redemption with Hustle & Flow. This time, it surrounds its two protagonists in Lazarus and Rae who are both characters that are struggling with some kind of conflict. Lazarus is nursing a broken heart while Rae is dealing with her inescapable behavior. In Rae, Lazarus finds a way to make himself useful by trying to help this girl. In Lazarus, Rae finds an unlikely father figure who can help her deal with the demons she's been surrounded by.

While the film is comical and filled with a lot of moments filled with heart and drama, Brewer does maintain a sense of entertainment towards his audience. While his script isn't as consistent as his previous film, it still brings a lot of fun while delving into the grittiness of the South. While it's been called an exploitation film of sorts, Brewer doesn't hold back into his influences when it comes to 1970s cinema. Like his fellow, Southern counterpart David Gordon Green, the two revel in the hilarity of the films of the South from the 1970s. From the title credits to the locations they're in while bringing a lot of cinematic style to their films. Brewer however, is more optimistic than Green in terms of storytelling. Brewer is also more musical where in this film, he reveals the joy and healing process the blues acts. Overall, it's a strong follow-up from the very talented Craig Brewer.

Helping Brewer with his unique, colorful vision of the South is cinematographer Amy Vincent with her gritty yet enchanting look of the South from its colorful evening skies to the intimate settings in bars along with wonderful camera work to convey the sense of energy. Production designer Keith Brian Burns and art director Liba Daniels also add to the intimacy and grittiness of the South to the small cabin that Lazarus lives in to the trailer home that Rae and Ronnie live in. Maintaining the sense of authenticity, Burns and Daniels adds life to the locations where the whole film looks and feels like a local, Southern town. Editor Billy Fox adds style to the editing with some rhythmic jump cuts, long shots, and perspective cuts to play to the film's stylistic feel. Sound editor Frank Smathers does excellent work in the sound to bring the atmosphere of the South including a scene involving a storm mixed in with the music. Composer Scott Bomar brings an amazing film score filled with great blues tracks including a snarling one that involves Rae's sickness. The rest of the film's soundtrack features some fantastic blues cuts including some numbers from Samuel L. Jackson himself. Jackson is a damn good singer with some funny lyrics about his struggles.

The film's cast is wonderfully assembled with some memorable small performances from Kim Richards, rapper David Banner, Michael Raymond-James, Adriane Lenox, and Neimus K. Williams in a hilarious scene with Ricci. John Cothran Jr. is excellent as the film’s moral guide of sorts as R.L. who is one of the few friends Jackson's character has and gives an excellent performance in bringing morality to the film. S. Epatha Merkerson is excellent in a small, memorable role as the sweet, caring Angela who brings a lot of spirit to Jackson's character while making him fill a needed void in his broken heart. The weakest link in the cast is Justin Timberlake but not entirely. Timberlake is good when his character deals with the anxieties and emotional issues but when he has to play tough and act like a badass, he's not so convincing and comes off as somewhat cheesy. It's not his fault but it's just that he’s not convincing in being very tough.

Christina Ricci gives an amazing performance as the nympho, crazy Rae with her unruly behavior. Wearing an actual, 40-pound chain, Ricci sells her performance in playing a crazy young woman wearing white-cotton panties and half-torn t-shirt. Ricci exudes her sex appeal while revealing a lot of angst into her character's inner turmoil. It's a fantastic performance from the often underrated Ricci. Samuel L. Jackson is in top form as the God-fearing Lazarus where Jackson brings a lot of care and humor to the role while proving himself to be a wonderful bluesman. Jackson is great in every scene he's in while proving himself to be a bit more complex. Jackson also has great chemistry with Ricci as the two bring a lot to the scenes they're in whether it's sexual tension or father-daughter relationship of sorts.

Black Snake Moan is an unsettling yet enthralling film from Craig Brewer that features a great performance from Samuel L. Jackson. Along with a superb supporting cast including Christina Ricci, it's a film that doesn't play nice while exploring the world of the American South at its dirtiest and at its most troublesome. In the end, Black Snake Moan is a phenomenal film from Craig Brewer.

Glad you enjoyed this. It's such an under appreciated film. And I totally agree- both Jackson and Ricci are great. Good review.

I've heard a lot of conflicting reviews and thoughts on this film, but yours seems really balanced and grounded. It's not perfect, but well worth a watch. I'll have to find this one.

Nice review! I agree this film is very unsettling, but I thought it was great. Very hard to watch at times, but always interesting.

@Wendell Ottley-It is a very underrated film but dammit, it is so fun to watch.

@Fisti-It's an unsettling film but that's what I love about it as it plays like a dirty blues song.

@Brittani-It was fun to watch as I just loved the fact that it didn't play nice.

I agree Ricci's performance was really good and the changes she goes through was beleviable. Good section abut the sound design That section with the Storm was great. It's a very uplifting movie when I thought it was just going to be an exploitation flick

@TheVern-It's a film that I think needs to be seen more as I hope Craig Brewer can recover from that unnecessary remake of Footloose.

I remember seeing stills of this film, so definitely different from Snake on a Plane eh? Ha..ha.. This sounds like an interesting, more serious role for Samuel L. Jackson, I've only been seeing him in Marvel movies lately.

@ruth-This is Jackson at his best as it reminds you that there's so much more to him than having him be Nick Fury or say "motherfucker" every once in a while.