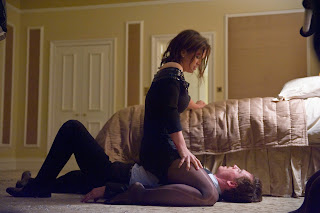 Directed, shot, and edited by Steven Soderbergh and written by Lem Dobbs, Haywire is the story of a spy who is betrayed by her organization as she seeks revenge while uncovering a conspiracy that is going against her. The film is an action-thriller where a woman whose job was to help a company as she realizes that there’s more at stake as she is a pawn of a big scheme. Starring Gina Carano, Ewan McGregor, Michael Fassbender, Channing Tatum, Michael Angarano, Antonio Banderas, and Michael Douglas. Haywire is a stylish yet entertaining film from Steven Soderbergh.

The film is an exploration of betrayal where a woman, who is hired by a private organization to retrieve hostages and kill targets, becomes part of a conspiracy where that organization tries to get rid of her. While it is a premise that is very simple, it is a film that is about a group of people who try to play a scheme where those of power become either corrupt or be caught off guard. Lem Dobbs’ screenplay doesn’t just explore what governments do to take care of situations but how certain individuals are willing to compromise them. In the middle of this is Mallory Kane (Gina Carano) who is just someone that does her job as she learns she is betrayed when an assignment she reluctantly takes part in is merely more of an attempt to eliminate her.

The first half of the story is about Kane being betrayed and what does she do as the narrative is largely told in flashback after a meeting a colleague has gone bad as she takes a hostage and tells him what is going on. The second half is about Kane exacting her revenge and why she gets betrayed as it involves all sorts of things about government involvements. Especially as it plays into ideas of capitalism and corruption in a world where the rules are changing and some in the old order are out of the loop. These things would motivate Kane into not just take action but also confront those who are running the show.

Steven Soderbergh’s direction is very stylish not just in his approach in creating a film that is thrilling and action-packed. It’s also a film where it’s quite engaging in the way the mystery unfolds and how it’s being told. Shot in various locations in two different continents, the film has something that feels big but also very intimate in some of the compositions that Soderbergh makes. Much of it involves close-ups and medium shots while some of the action scenes are presented in wide shots such as a chase scene in Dublin involving cops as there’s an intricacy to the way Soderbergh presents the sequence.

Serving as cinematographer in his Peter Andrews alias and editor in his Mary Ann Bernard alias, there are some unique images to the look of the film in terms of how the interiors are lit while Soderbergh uses a lot of blue filters for the scenes set in upstate New York. Soderbergh’s editing definitely has a lot of unique rhythms in the way the action and fights are presented yet he keeps it straightforward in order to maintain the air of suspense. Even as it would lead to confrontations and questions about the way the world works. Overall, Soderbergh creates a very intelligent yet riveting thriller about a woman going after those who betrayed her.

Production designer Howard Cummings, with set decorator Barbara Munch and art director James F. Oberlander, does excellent work with the look of the home where Kane‘s father lived in as well as the government offices and house that Kane goes to with a MI-6 agent. Costume designer Shoshana Rubin does nice work with the costumes as most of it is casual with the exception of the dress that Kane wears for a party. Visual effects supervisor John Kennedy does terrific work with the few visual effects shots in the film such as a scene in upstate New York where Kane tries to evade the police. Sound editor Larry Blake does fantastic work with the sound from the way punches and kicks are heard to the sound of sirens in some of the film‘s action scenes. The film’s music by David Holmes is brilliant for its mixture of funk and jazz to play into the energy of the film with some electronic pieces for the suspense and drama.

The casting by Carmen Cuba is amazing for the ensemble that is created as it features some notable small roles from Anthony Brandon Wong as a hostage Kane had to retrieve and Mathieu Kassovitz as a businessman that Kane and her MI-6 colleague Paul had to target. Michael Angarano is terrific as a young man named Scott that Kane takes hostage in the film’s first half as he learns about what she is doing. Michael Fassbender is excellent in a small role as a MI-6 agent named Paul who is part of the scheme to betray Kane. Antonio Banderas is brilliant as a Spanish contact named Rodrigo who is trying to watch over the international interest for the U.S. in terms of what is happening. Bill Paxton is fantastic as Kane’s father John who knows what his daughter does as he is aware of what is happening as he does whatever it takes to fool those who have betrayed her.

Channing Tatum is wonderful as a colleague in Aaron who only knows Kane for about a week after an assignment as he’s asked to deal with her where he would question about what is going on. Ewan McGregor is superb as Kane’s former boyfriend/contractor Kenneth who is trying to make some moves while getting Kane to accept a job that he needed. Michael Douglas is incredible as the government agent Coblenz who is this ambiguous figure as he is someone that is trying to watch over everything while being unaware of things that are happening. Finally, there’s Gina Carano in a remarkable performance as Mallory Kane as this woman who is trying to leave her job as she copes with being betrayed as it’s a performance that has Carano display some charm while kicking some ass at the same time.

Haywire is a phenomenal film from Steven Soderbergh that features a fantastic performance from Gina Carano. The film isn’t just a smart action-thriller but also a compelling film about the way governments and private firms deal with things in a world that is becoming very complicated. In the end, Haywire is a marvelous film from Steven Soderbergh.

This is such an underrated movie. Glad you liked it. I will say that I thought Gina Carano was both a blessing and a curse. She was amazing during the fight scenes, of course, but terrible otherwise. I think if she could sell the quieter moments as well as she kicks ass this would be a much more appreciated film...and she'd be playing Wonder Woman, but I suppose that's another topic. Anyhoo, despite her shortcomings, Soderbergh crafted a wonderful movie.

I remember this movie's quite polarizing amongst bloggers, some outright hated it. I happen to enjoy this one and Soderbergh did a good job crafting an action flick. Gina can't act her way out of a paper bag but it's the kind of role that utilize her physical talents well and so I think the film still works. Besides, the supporting cast is simply amazing and it's worth seeing just for that scene w/ Fassbender!

@Wendell Ottley-I think she's a decent actress. She does have some charisma while managing to do what was needed.

@ruth-I like the film as well. I think audiences were expecting something conventional but it's Soderbergh. Nothing about him is conventional.