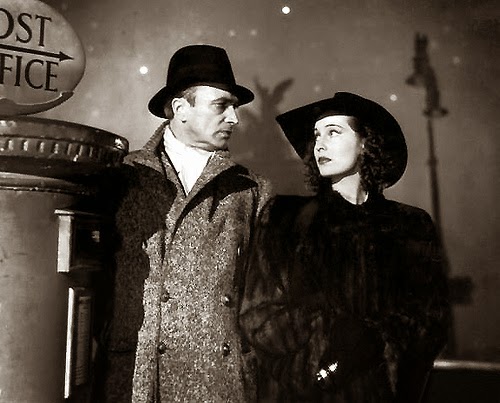 Directed by Michael Powell and written by Emeric Pressburger from an idea by Powell and Brock Williams, Contraband is the story of a Danish sea captain who is stuck in the British ports as he deals with Nazi spies in the early stages of World War II. The film is a spy drama set at a time when Denmark was neutral to the war as it explores a Danish man who is suddenly forced to take part in the war. Starring Conrad Veidt and Valerie Hobson. Contraband is a thrilling and engaging film from Michael Powell and Emeric Pressburger.

The film revolves around a Danish sea captain who is stopped at a British port where he unknowingly is carrying two British secret agents as he aids one of them in uncovering a Nazi spy syndicate in London. It’s a film that plays into a man trying to do his duty and not be involved in this conflict between Britain and Nazi Germany as he is only in the British seas to transport cargo. Though there are rules and regulations that Captain Andersen (Conrad Veidt) had to follow, the British officers do give him a chance to relax where a shore pass he and his subordinate First Officer Axel Skold (Hay Petrie) were supposed to have were stolen prompting the two to find the passengers that stole those passes. One of them is a passenger in Mrs. Sorensen (Valerie Hobson) who is revealed to be a British spy where Andersen reluctantly helps her.

Emeric Pressburger’s screenplay plays into the sense of fear that is going on in Britain where there’s curfew as London is having blackouts. Though Captain Andersen wants to remain neutral, his encounter with the Nazis would only prompt him to be directly involved knowing the risks he is putting for himself and his country. The script also has these intricacies into what is happening in Britain and what Nazis would try to do as they would target other countries including the U.S. to create more trouble. It adds to the sense of suspense and stakes that emerge where Andersen and Sorensen have to take charge while the script includes a moment before the suspense where the two eat at a Danish restaurant where Andersen would later get help from those men for the film’s climax.

Michael Powell’s direction is quite simple as he shoots the film on location on the British ports just around the time Britain was in war with Nazi Germany. Much of it is simple with some unique tracking shots for the scenes set at the Danish boat as it plays to the sense of control that Andersen needs in his boat. The scenes at the Danish restaurant are energetic with some unique approach to close-ups and medium shots as well as some unique camera angles for some exterior scenes during the blackout. Powell also create these tense moments where Sorensen is being interrogated by the lead Nazi spy Van Dyne (Raymond Lowell) where he knows where to place the camera as well as showcase exactly what Andersen is seeing after being knocked unconscious by a spy. All of which leads to a very interesting and energetic climax that is told with such style and bits of humor by Powell. Overall, Powell and Pressburger create a very riveting and captivating spy film about a Danish sea captain helping a woman uncover a Nazi spy ring.

Cinematographer Freddie Young does excellent work with the film‘s black-and-white photography where many of the film‘s exterior nighttime scenes in London and at sea are very interesting with its low-key approach to lighting as well as some of the interiors including its climax. Editor John Seabourne does nice work with the editing as it‘s very straightforward with a few fade-outs for structural reasons and some rhythmic cuts for some of the film‘s humor. Set decorator Alfred Junge does superb work with the set pieces from the look of the Danish restaurant in London to the secret place where the Nazi spies are.

Costume designer Rahvis does amazing work with the dress that Sorenson wears as well as the tuxedos and uniforms some of the men wear. Sound recordists C.C. Stevens and A.W. Watkins do terrific work with the sound to play into the film‘s suspenseful moments as well as some of its celebratory scenes. The film’s music by Richard Addinsell and John D.H. Greenwood is brilliant for its bombastic orchestral score as well as some lush moments while music director Muir Matheson uses some dancehall music and some traditional pieces to play into Andersen’s need to rally such as the Danish folk song that he and his brethren would sing.

The film’s fantastic cast includes notable appearances from Esmond Knight as a fellow British spy known as Mr. Pidgeon, Joss Ambler and Harold Warrender as a couple of British officers who stop Andersen to inspect his cargo, and Raymond Lovell in a terrific performance as the Nazi spy Van Dyne who is trying to create havoc for Britain and other future enemies. Hay Petrie is excellent in a dual role as Andersen’s subordinate Axel Skold and as Skold’s brother Erik as Petrie brings a lot of charm and wit to both characters. Valerie Hobson is amazing as Mrs. Sorenson as this woman who irks Andersen early on for not wearing a life jacket as she realizes that she needs his help to uncover the Nazi spy ring in London. Finally, there’s Conrad Veidt in a brilliant performance as Captain Andersen as this Danish sea captain who is just trying to do his job as he finds himself involved in uncovering a Nazi spy ring as he decides to get involved for the sake in doing what is right for the world.

Contraband is a marvelous film from Michael Powell and Emeric Pressburger. Featuring great performances from Conrad Veidt and Valerie Hobson as well as intriguing ideas on the world of spies in World War II during its Phoney War period. It’s a film that showcases a moment in time where World War II was just starting as Denmark would enter that war knowing what is at stake. In the end, Contraband is an exhilarating film from Michael Powell and Emeric Pressburger.

Powell/Pressburger Films: The Spy is Black - (The Lion Has Wings) - (An Airman’s Letter to His Mother) - 49th Parallel - One of Our Aircraft is Missing - The Life and Death of Colonel Blimp - (The Volunteer) - A Canterbury Tale - I Know Where I'm Going! - A Matter of Life and Death - Black Narcissus - The Red Shoes - The Small Black Room - (Gone to Earth) - The Tales of Hoffman - (Oh… Rosalinda!!!) - (The Battle of the River Plate) - Ill Met by Moonlight - Peeping Tom - (They’re a Weird Mob) - (Age of Consent) - (The Boy Who Turned Yellow)

You fooled me. By the title I thought you meant the action flick from a few yeas ago. Haven't seen this one, but it definitely sounds like its worth a look.

Well, I think should've made it clearer since I forgot there was a film of the same name starring Mark Wahlberg and Kate Beckinsale.

Anyways, this is still a good film if you're interested in the works of Michael Powell and Emeric Pressburger though the print wasn't that great but its story more than made up for it.

I like a good spy drama and this one sounds like it's worth a look indeed! I have a feeling this one might be much better than the Mark Wahlberg one of the same name, ahah.

@ruth-I would definitely see this if you're into that genre though I kind of consider it a minor but worthwhile film from Michael Powell and Emeric Pressburger.