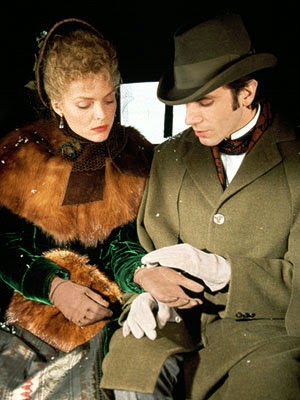 Based on the novel by Edith Wharton, The Age of Innocence is the story of a man who is about to get married only to fall for his fiancee’s cousin as it causes a lot of problems in the world of upper-class New York City in the 1870s. Directed by Martin Scorsese and screenplay by Scorsese and Jay Cocks, the film is an exploration of a love triangle where man falls for a woman who is known for having a very bad reputation as it is told by Joanne Woodward who serves as the film‘s narrator. Starring Daniel Day-Lewis, Michelle Pfeiffer, Winona Ryder, Michael Gough, Robert Sean Leonard, Norman Lloyd, Richard E. Grant, Mary Beth Hurt, Stuart Wilson, Miriam Margoyles, and Geraldine Chaplin. The Age of Innocence is a ravishing and evocative film from Martin Scorsese.

Set in 1870s New York City, the film plays into the life of a lawyer who is engaged to a woman who is prim and proper as her cousin makes a return to the city as the man falls for her and sense of individuality. It’s a film that does play into ideas of a love triangle but it’s also a film that explores a world that is changing as certain behaviors and ideas that is part of the norm of society forces this man to wonder if that’s the way to live. Even as this woman he falls for is a woman with an already scandalous reputation as she is seeking to divorce a count she is married to. It’s a film that plays into a lot of things as it’s told by this unseen narrator who often comments about the behavior and feelings of Newland Archer (Daniel Day-Lewis) and his relationship with May Welland (Winona Ryder) as well as his feelings for May’s cousin Countess Ellen Olenska (Michelle Pfeiffer).

The film’s screenplay by Martin Scorsese and Jay Cocks definitely explores a world where there are expectations to fit in to the conventions of upper-class New York City society. It’s something that May has been doing and seems comfortable with as she never really has an opinion about anything but rather maintain that idea of conformity. Archer definitely loves May as he knows that she is a woman that can be a great wife but upon meeting Ellen, he begins to question about what he wants in his life. Especially as Ellen is someone that is quite opinionated and doesn’t play into the idea of conventionality as she knows she is the subject of gossip due to her relationship with a count. That individuality is what attracts Archer to Ellen as it has him looking at the world in a different way but also has him obsessing about Ellen who is trying to lead her own life.

The script also explores that sense of two people wanting to be in love as Archer and Ellen are aware that May is in the middle as she is someone they don’t want to hurt. Even as there’s moments where Archer and Ellen want to say something but there’s many other things that happen which often has Ellen leaving Archer for different reasons. Plus, they’re hiding the relationship around people that are close to them as there’s other characters involved in the story such as Ellen’s grandmother Mrs. Mingott (Miriam Margoyles) who is a powerful woman of New York society with very strong opinions as she is admired by nearly everyone. Even as she would be an influence to May and several other characters as well as Archer where he would have to make a major decision on what he wants to do with his life and who to be with.

Martin Scorsese’s direction is definitely exquisite in terms of is total attention to detail in the way he captures 1870s New York City as it’s shot mostly in the city itself with scenes shot in Paris and other locations in Philadelphia. Much of it plays into a world that is very refined with a set of rules about how to live in upper-class New York society where everyone goes to the opera and are sitting in seats as the men are in one booth and their wives are in another booth. The usage of wide and medium shots play into that vast world while Scorsese also uses some stylish camera movements such as tracking shots and cranes to play into a world that sort of feels constrained by its rules only for someone like Ellen to come in and kind of break things down bit by bit. Even as Scorsese goes for close-ups to capture the sense of desire that looms between Archer and Ellen as well as extreme close-ups of their faces and hands.

The direction also has Scorsese utilizing many elements that are very stylistic in his approach to framing in the way he would light certain moments or to capture something where Archer and Ellen are in their own world that is detached from everything else. It adds to something that plays to a world that is changing though the people in Archer and Ellen’s world are quite oblivious to it because they’re protected by their environment. Yet, things would crash down once reality starts to come in for Archer and Ellen where Archer would have to make a decision as it also relates to May who does start to display elements of her own self to emerge late in the film. Overall, Scorsese creates a very intoxicating yet heart-wrenching film about a man caught in a complicated love triangle.

Cinematographer Michael Ballhaus does brilliant work with the film‘s very colorful and lush cinematography to capture the many layers of colors that is in display for some of the film‘s interior scenes while using some low-key lights for scenes at night. Editor Thelma Schoonmaker does incredible work with the editing with its usage of jump-cuts, flourishing montages, dissolves, and other stylish cuts to play into the sense of dramatic tension as well as longing between Archer and Ellen. Production designer Dante Ferreti, with art director Speed Hopkins and set decorators Robert J. Franco and Amy Marshall, does amazing work with the set design from the look of the houses and rooms where the characters are in to the ballrooms and opera houses as it displays great attention to detail to capture a period in time.

Costume designer Gabriella Pescucci does excellent work with costumes from the hats and suits the men wear as well as the lavish dresses that the women that plays into that period in time. Hair designer Alan D’Angerio and special effects makeup artist Manilo Rocchetti do fantastic work with the look of the characters from the hairstyles of the women to the beard and sideburns of some of the male characters. Sound editor Skip Lievsay does superb work with the sound to capture some of the atmosphere of the social gatherings along with low-key sound work in the dramatic moments of the film. The film’s music by Elmer Bernstein is wonderful for its lush and orchestral score to play into the period of the times as well as the romantic tension between Archer and Ellen while the soundtrack features music from that period including some opera and classical pieces.

The casting by Ellen Lewis is great as it features notable appearances from Charles and Catherine Scorsese as an old couple walking out of a train station, Martin Scorsese as a wedding photographer, Domenica Scorsese as a young woman Archer meets in Newport when he’s trying to find Ellen, Alexis Smith as Louisa van der Luyden, Sian Phillips as Archer’s mother, Alec McCowen as the Archer family friend Sillerton Jackson, Jonathan Pryce as a Frenchman Archer met in London in Riviere, Robert Sean Leonard as Archer’s adult son Ted in the film’s final moments, and Norman Lloyd as Archer’s mentor Mr. Letterblair who would counsel him about Ellen’s own attempts to divorce her husband. Mary Beth Hurt is wonderful as Regina Beaufort who feels shamed by her husband’s bad real estates deal while Stuart Wilson is terrific as Julius Beaufort who would often visit Ellen which raises suspicions in Archer that he’s one of her lovers. Richard E. Grant is superb as Archer’s friend Larry Lefferts as a man who is known for exquisite tastes as he is wowed by Ellen’s appearance.

Michael Gough is excellent as Archer’s family friend Henry van der Luyden who is giving Archer some advice on life while being very gracious towards May whom he likes a lot. Geraldine Chaplin is brilliant as May’s mother who is always warm towards Ellen while preparing May for the wedding and other family/social gatherings. Miriam Margoyles is amazing as Mrs. Mingott as Ellen’s grandmother who is always on a chair surrounded by little dogs as she is a person of power and influence while not afraid to speak her mind just like her granddaughter. Winona Ryder is remarkable as May Welland as a very kind and warm young woman who represents the form of innocence as she is the kind of woman that Archer should marry but manages to be so much more as Ryder just has this evocative presence that is a joy to watch.

Michelle Pfeiffer is incredible as Countess Ellen Olenska as this woman who is a free-spirit of sorts but is tormented by the mistakes she made in her past while is trying not to be judge as she finds comfort in Archer though she doesn’t want to hurt May. Finally, there’s Daniel Day-Lewis in a phenomenal performance as Newland Archer as a lawyer who is tormented by his love for May but is in love with Ellen as it’s a very restrained yet mesmerizing performance of a man who is torn between two women as well as realizing that the world he’s lived in is a façade of sorts but one that can protect him.

The Age of Innocence is an enchanting and sensational film from Martin Scorsese. Armed with a great cast led by Daniel Day-Lewis, Michelle Pfeiffer, and Winona Ryder as well as amazing technical contributions from its crew. The film is definitely a period piece that manages to be so much more in its study of characters, motivations, and ideals in late 19th Century New York City. In the end, The Age of Innocence is a tremendously rich and rapturous film from Martin Scorsese.

I feel like the only person on earth who doesn't love this movie. I just...found it so dull...but it is beautiful to look at.

I think it's a great film though I can understand why people didn't like it because they didn't expect Scorsese to make a film like this with no violence.

The Age of Innocence feels like a film that Scorsese and his editor Thelma had so much fun on. The color dissolves in particular. An under appreciated work.

@Luke-Oh I'm sure as the editing was top-notch. I think it's one of Scorsese's more underrated films.