The Stone Roses: Made of Stone 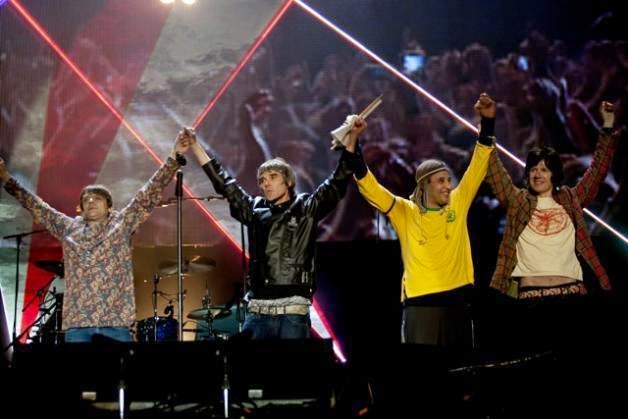 Directed by Shane Meadows, The Stone Roses: Made of Stone is a documentary about one of Britain’s great bands in the late 1980s who redefined the music scene for a brief period of time as they would reunite in 2012 with a concert in their hometown of Manchester. The film follows the group’s rise as an indie band that brought a lot to the music scene and their fall in the mid-1990s and their eventual comeback. The result is a very exciting and enthralling film from Shane Meadows.

In 1989, the Stone Roses released their self-titled debut which came out of nowhere as they went from this cult band from Manchester to becoming the biggest band in Britain. Just as they were destined to rule the world, their momentum was halted by litigation and other legal issues that prevented the band from performing and recording as they would eventually make their return with a second album in late 1994 in which the music scene had change and the band would dissolve two years later. Then in 2012 after years of rumors, the Stone Roses decided to finally reunite for a tour and possibly to make new music as director Shane Meadows would film this reunion as well as cover the band’s history.

Meadows does maintain a unique narrative as it moves back and forth from the band’s history to the announcement of their reunion tour, rehearsals, and concerts in Europe including the climatic three-night performance at Manchester’s Heaton Park. All of which has Meadows showcase four guys trying to not only become friends again but also remember why they enjoyed playing with each other. Through the historical portion of the film, Meadows and editors Matthew Gray, Chris King, and Tobias Zaldua use rare footage including news interviews and such to play into the band’s history as well as their rise and fall. For the reunion section, Meadows and cinematographer Laurie Rose would shoot the portions in black-and-white digital and then into color for the European tour and its climatic show at Heaton Park.

With contributions from sound re-recording mixers John Rogerson and Johnathan Rush, Meadows doesn’t just make the film about the band but also what it meant to people. Especially the people in Manchester as more than a thousand would attend a secret free show as some of them would bring their kids to the show. While there are subtitles for what these people had to say, it is clear that there’s a special place for the Roses as they were one of the bands that really made Manchester one of the coolest places in the world. Meadows doesn’t just add that sense of personal touch as a Mancunian where he also gets Liam Gallagher of Oasis to comment on the band as he would attend their secret show. He also knows when not to film such as a key moment where a show in Amsterdam becomes a disaster as Meadows doesn’t interview the band what happened knowing that something did go wrong and he wanted to give them their space.

Meadows keeps much of the compositions to be simple and to the point in the concert scenes while capturing some of joy in the rehearsals. For the climatic concert in Heaton Park, it does become about Manchester as he would use helicopter aerial footage to capture the city coming alive. Especially as it plays to an event that many Mancunians think would never happen as the Roses deliver full-on.

I'm not familiar w/ this band's music but this still sounds like a fascinating documentary!

It is as it means a lot to me as their first album is my all-time favorite album.... ever!

They weren't very big in the U.S. but in Britain, they were gods.

I've been dying to see this doc as their first album is one of my all-time faves! I was lucky enough to see them when they played Toronto shortly before they broke up. It was a bummer that Reni was no longer drumming for them at that point but just to see the rest of them play live was something I will never forget!

@J.D. Lafrance-I really hope they come back to North America as I'm eager to see them live.