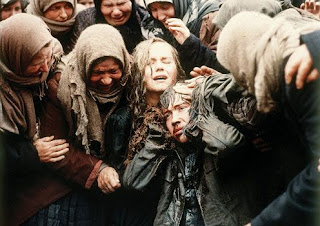 Directed by Elem Klimov and screenplay by Klimov and Ales Adamovich from a story by Adamovich, Come and See is the story of a young boy who witnesses the horror of war in his homeland of Belarus during its occupation by Nazi Germany during World War II. The film is a tale of survival from the eyes of a young boy who gets a harsh glimpse into war as well as see some of the ugliness of humanity. Starring Aleksei Kravchenko and Olga Mironova. Come and See is a horrifying and unflinching film from Elem Klimov.

Set in 1943 in the Belarus region of the then-Soviet Union, the film is a simple tale of a young teenage boy who joins the Belorussian army to fight the Germans in World War II where he encounters the darkest forms of reality on war. All of which is told through not just elements of reality but also aspects of surrealism as it’s really a story of innocence loss in the face of war as well as this young boy trying to survive the horror that he encounters. The film’s screenplay by Elem Klimov and Ales Adamovich doesn’t just follow the protagonist Flyora (Aleksei Kravchenko) from this idealist young boy who dreams of glory and importance into a young man who is ravaged by the most dire atrocities encounter in the face of war. The first act follows Flyora leaving his home village thinking he would return to his mother and twin younger sisters as the former doesn’t want him to leave home.

What happens instead is that he doesn’t become part of the gang of soldiers immediately where he has to do menial work like many other beginners while having to stay behind where more experienced soldiers go into battle. While he would befriend a young girl named Glasha (Olga Mironova) at the camp and fall for her. They would both experience the horror of war first-hand where Flyora would become temporarily deaf as he would return home unaware of what has happened. The second act is about Flyora’s revelation about his homecoming as well as encountering events that would be life-changing where he gets an even closer view into the world of battle from afar. Especially as the third act would have him go into a village and see first-hand the worst kind of atrocities committed by the Germans to the Belorussian.

Klimov’s direction is definitely entrancing not just for the visuals but also in the way he displays horror at its most visceral. Shot entirely on location in Belarus as well as other parts shot in other areas in the then-Soviet Union, the film doesn’t play nice as it comes to the locations where some of the scenery is foggy and also very dirty with mud and swamps. It’s Klimov’s idea of this reality that is just very stark and unforgiving where the camera is always following this young boy as he goes into land that he knows quite well but it has changed to fit an atmosphere that unsettling as well as in a state of chaos. While Klimov would use some unique wide and medium shots to capture the massive landscape of the locations including the forests. He would also create some dazzling compositions that play into Flyora’s state of mind where he would have Flyora in the foreground and events around him in the background to play into his sense of detachment of the horror he’s surrounded by.

Klimov’s usage of the steadicam would be quite prominent for many of the tracking shots which often follows a lot of the action as well as every movement Flyora makes throughout the film. At times, the camera either follows him or acts as another witness of these atrocities that include some of the most terrifying moments in war. Notably as Klimov would use close-ups and high camera angles to play into this air of claustrophobia and fear that surrounds a key scene that is just terrifying to watch. Even in its aftermath that displayed some elements of surrealism that includes a woman wearing a Nazi uniform eating lobster watching these terrifying events happen without a care in the world. Still, it showcases a lot of what Flyora sees including a plane that is often flying above as it play into this idea of fantasy but also the reality that Flyora eventually come to terms with. Overall, Klimov creates an unsettling yet harrowing film about a young boy’s encounter with war.

Cinematographer Aleksei Rodionov does brilliant work with the film‘s stark cinematography with its usage of desolate yet grimy colors to play into the location while emphasizing on natural lighting to play into not just some of the beauty but also the ugliness at its most authentic. Editor Valeriya Belova does excellent work with the editing as it‘s largely straightforward with a few rhythmic cuts and dissolves while maintaining the length in some of the intricate tracking shots that is presented. Production designer Viktor Petrov does fantastic work with the look of the villages and farmhouses that play into the world that Flyora is from and what the Nazis would destroy.

Costume designer Eleonora Semyonova does nice work with the costumes from the ragged look of the partisan soldiers as well as the grimy look of the Nazi uniforms. The sound work of Viktor Mors is amazing for its mixing and sound design to play into the sounds of gunfire, artillery fire, and other array of textures including the sparse sounds when Flyora loses his hearing for a portion of the film. The film’s music by Oleg Yanchenko is phenomenal for its eerie yet entrancing ambient-based score that play into the bleak tone of the film while the music soundtrack also feature some classical pieces from Richard Wagner, Johann Strauss, and Wolfgang Amadeus Mozart.

The film’s superb cast feature some notable small roles from Juri Lumiste as a Nazi officer, Viktor Lorents as a Nazi commander, Evgeniy Tilicheev as a collaborator for the Nazis, Vladas Bagdonas as a partisan soldier that Flyora would help in the second act, and Liubomiras Laucevicius, with dubbing by Valeriy Kravchenko, as the Belarussian partisan leader Kosach whom Glasha has feelings for. Olga Mironova is remarkable as Glasha as this young woman who is at the army camp helping soldiers out as she befriends Flyora while helping him return home where she gets an extremely close look at the horror of what happened to the people at his village. Finally, there’s Aleksei Kravchenko in an incredible performance as Flyora as this young boy who becomes a soldier in the hope of glory and make his life matter only to be confronted with reality of the most vicious kind as it’s a performance that is just mesmerizing to watch in capturing a young boy ravaged by the horrors of war.

Come and See is a tremendous film from Elem Klimov. Featuring a great cast, eerie visuals, graphic depiction of violence and war, and a chilling story of survival and innocence lost. It’s a war film that is truly unlike any film of that genre as well as something that will definitely challenge the casual viewer into see war for what it really is in the most visceral and horrific way. In the end, Come and See is a magnificent film from Elem Klimov.

I've never heard of this, but it sounds brutal. Now I'm going to look into it. Great review!

@assholeswatchingmovies.com-This is a film that not many people have seen as it's considered one of the definitive anti-war films ever as it display something that isn't seen very often in war movies.

@Brittani-A lot of people haven't heard of this but it needs to be seen as maybe you will watch as a Blind Spot next year or soon.