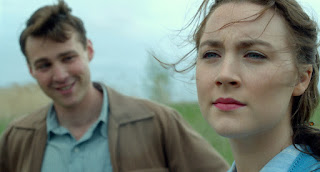 Based on the novel by Colm Toibin, Brooklyn is the story of a young Irish woman who travels to America in the early 1950s where she falls in love with an Italian-American while being pulled back to her homeland. Directed by John Crowley and screenplay by Nick Hornby, the film is an exploration of a young woman trying to find herself in a new world while carrying elements of the old world with her. Starring Saoirse Ronan, Emory Cohen, Domhnall Gleeson, Jim Broadbent, and Julie Walters. Brooklyn is a ravishing and evocative film from John Crowley.

Set in 1951, the film is the story of a young Irish woman who is given the chance to go to America with the help of a kindly priest as she encounters her new surrounding where she eventually falls for an Italian-American plumber until she is pulled back to her home. It’s a film that is about this young woman not only trying to find herself in a new world but also carry something of her own homeland where she is often given reminders as the borough of Brooklyn is filled with a lot of Irish immigrants. While the character of Eilis Lacey (Saoirse Ronan) would endure homesickness and trying to fit in, she would eventually find herself loving her new world as well as being in a relationship with this Italian-American named Tony Fiorello (Emory Cohen) who is very different from the men she’s met in her life.

Nick Hornby’s screenplay definitely explores the sense of loneliness and uncertainty Eilis deals with as she would correspond with her old sister Rose (Fiona Glascott) during her stay in Brooklyn where Eilis also has to cope with the expectations of how to present herself in America. While there is that air of culture shock, Eilis does at least get the support of Father Flood (Jim Broadbent), her landlord Madge Kehoe (Julie Walters), and fellow lodgers who are also Irish immigrant to understand the way things work. Even in meeting Tony in a social outing would give Eilis a chance to see America and how diverse it is. The film’s third act would have Eilis return to Ireland because of family where she is drawn to not just changes in her hometown but also the presence of a new man in Jim Farrell (Domhnall Gleeson) who is kind and can offer Eilis a life in Ireland but it would play into the dramatic conflict that she faces.

John Crowley’s direction is truly mesmerizing not just for its look but also in re-creating the look of early 1950s Brooklyn and Ireland. With the locations in Ireland actually shot in areas near Dublin and the small town of Enniscorthy while the scenes set in Brooklyn were mainly shot in Montreal. Crowley creates a distinctive look for each setting as it play into the world that Eilis encounters where he utilizes some close-ups and medium shots to play into the intimacy of her world where she would work at a clothing store in Brooklyn. The scenes shot in Brooklyn have this more dream-like look to play into Eilis’ own growing love for the place as well as for Tony. Crowley’s usage of the wide shots would come into play for the second and third act where the latter would be once again set in Ireland as it plays into a world that is changing but also bear elements that Eilis would remember. Especially as it play into the dramatic conflict that Eilis would endure about whether to stay home in Ireland or return to life she was starting in Brooklyn. Overall, Crowley creates a rapturous yet intoxicating film about an Irish woman’s time in a new world.

Cinematographer Yves Belanger does incredible work with the film‘s cinematography from the usage of blue-green looks for some of the scenes set in Ireland to the usage of soft colors and lighting schemes for some of the interiors set in Brooklyn. Editor Jake Roberts does excellent work with the editing as it is largely straightforward to play into the drama as well as bits of humor. Production designer Francois Seguin, with art directors Irene O’Brien and Robert Parle and set decorators Suzanne Cloutier, Jenny Oman, and Louise Tremblay, does amazing work with the look of 1950s Brooklyn from the recreation of Coney Island to the look of the clothing shop that Eilis would work at. Costume designer Odile Dicks-Mireaux does brilliant work with the costumes from the different kind of clothes that Eilis would wear throughout the film as it play into her evolution as a person.

Hair designer Lorraine Glynn and makeup designer Morna Ferguson do nice work with the look of the characters in the hairstyles the women had at the time as well as the kind of makeup they used. Visual effects supervisor Andy Clarke does terrific work with the visual effects as it is mainly set dressing for some of the exteriors set in Brooklyn to recreate its look in the early 1950s. Sound designer Glenn Freemantle does superb work with the sound to play into the dancehalls in both Ireland and Brooklyn as well as some of the raucous sounds that happen in some of the locations in Brooklyn. The film’s music by Michael Brook is wonderful for its somber yet soaring orchestral score that play into the drama without overwhelming it while music supervisor Kle Savidge provides a soundtrack that mixes traditional Irish music with some of the contemporary music of the times.

The casting by Fiona Weir is great as it feature some notable small roles from Eileen O’Higgins as Eilis’ friend Nancy, Peter Campion as Nancy’s boyfriend George, Jenn Murray as an Irish immigrant who comes in during the film’s second half, Paulino Nunes and Ellen David as Tony’s parents, James DiaGiacomo as Tony’s youngest brother Frankie, Mella Caron as a young woman Eilis meets late in the film, and Eva Birthistle as a woman named Georgina who would give Eilis guidance on what to do when arriving in America. Emily Bett Rickards and Nora-Jane Noone are fantastic in their roles as Eilis’ housemates who are also Irish immigrants who are troublesome but fun while Jessica Pare` is terrific as Eilis’ boss Miss Fortini who shows Eilis how to present herself at work as well as give her tips on fashion.

Jane Brennan is wonderful as Eilis’ mother who copes with being alone as well as knowing that Eilis is far away while Fiona Glascott is excellent as Eilis’ older sister Rose who would be the one to get Eilis to America as she would correspond with her during Eilis’ time in America. Brid Brennan is brilliant as Miss Kelly as Eilis’ former employer back in Ireland who is quite cruel as she would have this great moment late in the film as she is a reminder of what Eilis doesn’t like about her home. Julie Walters is amazing as Madge Kehoe as a woman who runs a boarding house for Irish immigrant women to live in as she is this mixture of maternal warmth with a strict demeanor. Jim Broadbent is marvelous as Father Flood as this kind priest who would help Eilis find a place to stay as well as a job as he is this warm figure that is like a father of sorts for Eilis. Domhnall Gleeson is remarkable as Jim Farrell as this kind Irishman who is part of the rugby team as he is this gentleman that fascinates Eilis.

Emory Cohen is phenomenal as Tony Fiorello as this Italian-American who doesn’t play into traditional stereotypes of most Italians as he is someone that has simple ambitions while being very kind and gentlemanly towards Eilis. Finally, there’s Saoirse Ronan in a sensational performance as Eilis Lacey as this young Irish woman who travels to America where she copes with being homesick as well as culture shock where finally comes into her own and find a life in Brooklyn while displaying the anguish and internal conflict of returning to her homeland and the new life she has grown accustom to as it’s a career-defining performance for Ronan.

Brooklyn is a spectacular film from John Crowley that features a radiant performance from Saoirse Ronan. Along with Nick Hornby’s compelling script, gorgeous visuals, and a phenomenal supporting cast, it’s a film that isn’t just this touching story of a young woman in a new world and experiencing love but it is also a story of a woman finding her identity. In the end, Brooklyn is a tremendous film from John Crowley.

John Crowley Films: (Intermission) - Boy A - (Is Anybody There?) - (Closed Circuit)

Spectacular indeed! I love this film. I wanted Saoirse to take the Oscar, although I was happy for Brie. I bought this on DVD immediately when it came out too.

I'm on an island with this one, but I couldn't really get with it. It is a gorgeous looking movie, even a well-acted one. The way the story plays out doesn't work for me. I never felt any real growth from her. Whenever I get around to publishing my review of it, my thoughts will be clearer.

I liked but didn't love this one.

Beautiful review! You captured many things why I LOVE this film… Saoirse Ronan is amazing and she'll win an Oscar one day!

@Brittani-Having now seen this. I'm still with Brie Larson for the Oscar but I think Saoirse would've been a great choice if she had won.

@Wendell-I'll await for your review as I really did connect with the film personally as I'm a son of immigrant parents.

@ruth-Thank you. I think Saoirse is definitely on her way to cultivating a great acting career and she will win an Oscar someday.

I re-watched this movie last night. First time since the theater. It was even better than the first time. It's such a solid, beautifully told story. It's a comfort movie. A rarity. The type of movie where good things happen to good people because they're good people. It isn't sarcastic or cynical, and it treats the immigrant experience with such respect. You captured everything that is great about this movie in your review. Great stuff!

@Kevin-Thank you. I would've expected it to be cynical but it doesn't go that way which is why I think it worked and managed to be real without being too snotty.