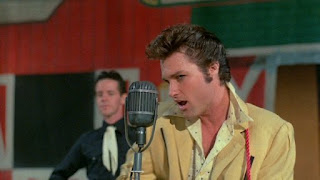 Directed by John Carpenter and written by Anthony Lawrence, Elvis is a made-for-TV movie about the life and career of Elvis Presley from his early beginnings to the aftermath of his comeback in the late 1960 and early 1970s. Told in a stylistic fashion, the TV movie explores the turbulent and raucous life of the King of Rock N’ Roll as he tries to deal with many ups and downs as he is played by Kurt Russell. Also starring Shelley Winters, Season Hubley, Bing Russell, and Pat Hingle. Elvis is a towering and mesmerizing TV movie by John Carpenter.

The life of Elvis Aaron Presley is one of the most unique in the history of the world as he was the man that brought a new sound to the post-war era of the 20th Century and became the King of Rock N’ Roll through many hit songs that are timeless. The TV movie is a typical story of Elvis Presley’s life as it’s told in a straightforward fashion though it begins in 1970 where Presley is about to mount his big comeback concert at the International Hotel in Las Vegas where he would reflect on his life and the journey he took from obscurity to being a troubled icon. The teleplay by Anthony Lawrence does take some dramatic liberties in aspects on Presley’s life yet it’s main focus is on Presley and the need to find balance in his success but also wanting to remain humble. There is a structure to the script where it’s first act is about Presley’s childhood and the need to help out his parents anyway he can but also wanting to become a singer.

The second act is about his meteoric rise but also tragedy when he deals with the death of his mother Gladys (Shelley Winters) around the time he would serve in the U.S. Army and later meet Priscilla (Season Hubley) who would become his wife in 1967. The third act is about the birth of their daughter Lisa Marie Presley but also Presley’s struggle with fame and fulfillment that would culminate with his comeback at the International Hotel. Yet, it all plays into Presley and his need to entertain and have his friends be along for the ride but also wanting to make his parents proud. Presley also talks to his stillborn twin brother Jesse as it adds to that lack of fulfillment and guidance that Presley craves for where he would also cope with the chaos of his fame that would eventually affect his marriage to Priscilla.

John Carpenter’s direction is largely straightforward which isn’t a complete surprise considering that it’s a sprawling TV movie with a near three-hour running time (in its Blu-Ray release). Still, Carpenter does manage to create something that is very engaging as it plays into the rise of this young man born at Tupelo, Mississippi who would later live in Memphis, Tennessee with his family. Shot largely in Los Angeles with some of it shot in Tennessee and some second unit shots of Las Vegas. Carpenter does manage to create something that play into a period of time where Presley is trying to maintain that sense of humbleness as he is devoted to family and his roots. With the usage of wide and medium shots for the locations as well as some close-ups to maintain some of the intimacy. Carpenter does create some compositions that are beautiful and lively where he allows the simplicity of these images to really say a lot without the need to be overly stylish. Overall, Carpenter creates an entertaining yet compelling film about the life of Elvis Presley.

Cinematographer Donald M. Morgan does excellent work with the film‘s cinematography from the usage of shadows and lights for some of the interiors to the beautiful usage of natural colors for many of its exterior scenes in the daytime. Editors Christopher Holmes and Ron Moler do nice work with the editing as it‘s mostly straightforward with a few stylish dissolves as well as fade-outs that is common with most TV movies. Art directors Tracy Bousman and James William Newport, with set decorator Bill Harp, do fantastic work with the look of the homes that Presley lived throughout his life as well as the look of some of the venues he would play at. Costume designers Suzanne Grace and Richard Mahoney do brilliant work with the costumes to play into the period of the times as well as the evolution of the clothes that Presley would wear as a performer.

Hair stylist Ruby Ford and makeup artist Marvin G. Westmore do terrific work with the look of the hairstyles that play into the way Presley looked throughout the years as well as the hairstyles that Priscilla would have in those years. Sound mixer Willie D. Burton does superb work with the way the music is presented as well as other sounds to play into Presley‘s lifestyle away from the world of performing. The film’s music by Joe Renzetti is wonderful as it’s mostly low-key in its orchestral setting to play into the dramatic elements of the film while most of it features a lot of the music of the times including songs performed by Elvis and country singer Ronnie McDowell as the live singing voice of Presley.

The casting by Joyce Selznick is great as it feature some notable small roles from Meg Wylie as Elvis’ fraternal grandmother, Felicia Fenske as Lisa Marie Presley, Abi Young as actress Natalie Wood, Joe Mantegna as Memphis Mafia member Joe Esposito, Dennis Christopher as film actor Nick Adams, Les Lannom as Sonny West of the Memphis Mafia, Peter Hobbs as Jim Denny of the Memphis Mafia, Randy Gray as the young Elvis, Elliott Street as Elvis’ bassist Billy Black, James Canning as Elvis’ guitarist Scotty Moore, Melody Anderson as Elvis’ first girlfriend Bonnie, and Ellen Travolta as Marion Keisker as the person who would record Elvis’ first songs. Charlie Cyphers is terrific as Sun Records founder Sam Phillips who would discover Elvis and give him his first break while Pat Hingle is superb as Elvis’ manager Col. Tom Parker who would make Elvis into a megastar as well as handle some of Elvis’ business.

Robert Gray is fantastic as Elvis’ friend Red West who would be part of the Memphis Mafia that would protect and hang around with Elvis as makes sure Elvis have a good time and keep him grounded. Bing Russell is excellent as Elvis’ father Vernon who does whatever he can to help Elvis following the death of his wife as well as watch over some of his son’s finances. Shelley Winters is amazing as Elvis’ mother Gladys as this woman who adores her son and strives for him to succeed while being overwhelmed by all of his success as she helps try to ground him from not having fame get over his head. Season Hubley is brilliant as Priscilla as Elvis’ wife whom he met in Germany when she was 14 as she would be the love of his life while later coping with living in a world that she has very little control of. Finally, there’s Kurt Russell in a phenomenal performance as the titular character who does whatever he can to succeed and help out his parents while dealing with all sorts of trials and tribulations where Russell displays a charm and humility that brings the man back to life as it’s one of Russell’s defining performances.

Elvis is a sensational TV film from John Carpenter that features an incredible performance from Kurt Russell as the titular character. It’s a TV movie that doesn’t just tell a fascinating story about the King of Rock N’ Roll but also manages to be a bio-pic that does a lot in creating a story that is engaging though still manage to be conventional. In the end, Elvis is a remarkable TV film from John Carpenter.

John Carpenter Films: Dark Star - Assault on Precinct 13 - Halloween - Someone’s Watching Me! - The Fog - Escape from New York - The Thing - Christine - Starman - Big Trouble in Little China - Prince of Darkness - They Live - Memoirs of an Invisible Man - Body Bags - In the Mouth of Madness - Village of the Damned - Escape from L.A. - Vampires - Ghosts of Mars - The Ward

I "think" I saw this when I was a kid, but I don't actually remember it. I'm surprised there hasn't been a legit big screen biopic on Elvis. I have heard there is one on the way, though.

There was a mini-series on Elvis more than a decade ago with Jonathan Rhys Meyers as Elvis. I haven't seen that one nor am I interested in seeing it. I don't know if I want an Elvis bio-pic as I think this one is the best we'll get. Plus, Kurt Russell really did a hell of a job on the King as he based his performance on the time he met Elvis when they did It Happened at the World's Fair back in 1963 which was the first movie Kurt Russell did where he played a kid that Elvis paid to kick him in the shins. Elvis heard that Kurt's dad Bing was on the set and Elvis wanted to meet Bing because he was on Bonanza.

I can't fathom having such a handle on regular releases that I start trolling back catalogues and TV movies. You're an inspiration.

@assholeswatchingmovies.com-Thank you. Thank you very much.

@ruth-I can't see Michael Shannon as Elvis but Kurt Russell definitely could do Elvis as he had a great reference point. Plus, he voiced Elvis in Forrest Gump and played an Elvis impersonator in 3000 Miles to Graceland.

I still can't believe I've never seen this. I have to change that right away.

See it or the King will karate chop you into pieces. Remember, there's 2 kinds of people that know karate.... the Chinese and the King!!!! Thank you, thank you very much.