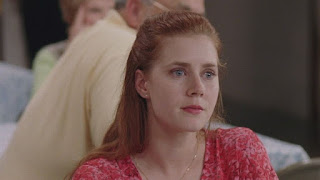 Directed by Phil Morrison and written by Angus MacLachlan, Junebug is the story of an art dealer who travels to North Carolina with her husband to meet his eccentric family that includes his brother’s young and pregnant wife. The film is a family comedy-drama that explores not just a family that off the wall but a woman trying to understand where her husband comes from. Starring Embeth Davidtz, Alessandro Nivola, Celia Weston, Scott Wilson, Benjamin McKenzie, and Amy Adams. Junebug is a witty and delightful film from Phil Morrison.

After meeting a man at her art gallery and then marrying him, the film is about a woman who travels to North Carolina with her husband to meet a reclusive painter as her husband’s family live nearby where she wants to meet them. Along the way, she would get to know this family of eccentrics that includes her brother-in-law’s sweet yet naïve wife who is pregnant. Angus MacLachlan’s screenplay doesn’t just follow the life and work of Madeleine (Embeth Davidtz) who runs an art gallery in Chicago that explores outsider art. It’s the fact that she is now part of a family with very strong Southern values as they’re a bit wary of her though she means well. Madeleine’s husband George (Alessandro Nivola) is reluctant about not just introducing her to his family. It’s also because he hadn’t been back home for years as it has caused resentment from his younger brother Johnny (Benjamin McKenzie) who is going through issues as he’s living at home with his parents and young wife Ashley (Amy Adams).

While George’s father Eugene (Scott Wilson) is welcoming towards Madeleine, his wife Peg (Celia Weston) isn’t receptive towards Madeleine as is Johnny who is uneasy about Madeleine’s presence towards Ashley who loves her. Yet, Madeleine would notice that there is tension in the family as she tries to balance her time with the family as well as deal with a competing art gallery from New York who also want the artwork of the local artist David Wark (Frank Hoyt Taylor). The time spent with the family would also become more problematic despite Ashley who is the embodiment of innocence as Madeleine is fascinated by her as she wants to be there for the young woman. Yet, the looming tension within the family would come to ahead once Ashley goes into labor as it becomes clear where everyone is at.

Phil Morrison’s direction is quite simple as it is shot largely on location in North Carolina through a trio of small towns including Winston-Salem as it doesn’t go for anything that is visually-striking. While there are a few wide shots, Morrison aims for something more intimate from the scenes inside the car to some of the local gatherings the characters go to. There are some camera movements in the film yet it is more about the simple aspects of George and his family as well as Madeleine being an outsider into this world. Morrison’s compositions are more concerned with the family unit as well as the tension that is looming with Madeleine being this observer. Still, she does get into moments that are uncomfortable such as a scene where she’s trying to help Johnny prepare for his GED exam as well as being there for Ashley. The film’s third act isn’t just about Madeleine kind of being left out as she would attend to her own business but also the resentment involving Johnny and George. Notably as it reveals why the latter hasn’t been coming back home lately with Ashley somewhere in the middle of this family tension. Overall, Morrison creates a heartfelt yet lively film about a woman meeting her new husband’s oddball family.

Cinematographer Peter Donahue does excellent work with the film‘s cinematography as it is mostly straightforward with its usage of lights for the scenes set at night. Editor Joe Klotz does nice work with the editing as it‘s mostly straightforward with a few jump-cuts and fade-outs for transitional scenes from the latter. Production designer David Doernberg and set decorator Sara Parks do fantastic work with the look of the family home in all of its quaint objects as well as the art gallery that Madeleine works at.

Costume designer Danielle Kays does terrific work with the costumes as it is mostly casual with some of the more city-like clothing of Madeleine and the colorful clothes that Ashley wears. Sound editor Eric Offin does superb work with the sound as it is mostly low-key and sparse to play into the surroundings and locations in the film. The film’s music by the indie-rock band Yo La Tengo is wonderful for its low-key indie-rock music with sparse guitar melodies and textures as the soundtrack mostly feature some classical music, traditional gospel, and a soul song written by Stevie Wonder.

The casting by Mark Bennett is great as it feature some notable small roles from Alicia Van Couvering as Madeleine’s gallery assistant, Joanne Pankow as Wark’s sister/attorney, and Frank Hoyt Taylor as the eccentric yet reclusive artist David Wark that Madeleine meets and want to present his art to the world. Scott Wilson is superb as George’s father Eugene as a man who is very receptive to Madeleine as she is interested in his work creating birdhouses and stuff out of wood. Celia Weston is fantastic as Peg as a woman who adores her son George though is wary about Madeleine as she sees her as kind of a snob and not good enough for George. Benjamin McKenzie is excellent as Johnny as George’s younger brother who doesn’t really like Madeleine very much yet harbors some issues towards his older brother which also has him feel strained towards Ashley.

Alessandro Nivola is brilliant as George as a man who falls for and marries Madeleine as he is reluctant to see his family where he copes with not just old issues but also trying to make Madeleine feel like part of his family. Embeth Davidtz is amazing as Madeleine as a British art gallery owner who is fascinated by outsider art as well as get to know George’s family where she finds a bond with both George’s father and Ashley. Finally, there’s Amy Adams in an incredible breakthrough performance as Ashley as this talkative and lively pregnant woman who is hoping a baby would help her marriage to Johnny as she is so full of innocence and wonderment that makes the character a pure joy to watch.

Junebug is a remarkable film from Phil Morrison. Featuring some beautiful images, a compelling story, superb music, and a great cast led by Amy Adams in a career-defining performance. It is a true gem of a film that explores unique family dynamics as well as a woman trying to see where her husband comes from. In the end, Junebug is a marvelous film from Phil Morrison.

Clearly, I barely remember this one and I hear you telling me I should give it another go.

@assholeswatchingmovies.com-Actually, I don't recall that as I finally saw the film for the first time in its entirety yesterday.

Amy Adams is so wonderful in this. Alessandro Nivola was pretty terrible, but luckily Adams and the others were bringing it so I didn't have to focus on him. I wanted to cry for Amy's character at the end of the film.

This is one I kinda wanted to see when it came out, but just never got around to it. I might give it a go.

This is perhaps the first film of Amy Adams I saw and she's terrific. I was also impressed by Embeth Davidtz & Alessandro Nivola who are such underrated actors. They played brother and sister in 'Mansfield Park' too.

@Brittani-Amy is so amazing in this as I just wanted to spend more time with her. She is so fun to watch.

@Wendell-If you have Starz and if it's coming on. DVR and check it out. It's a nice little gem.

@ruth-The first time I heard about Amy Adams was in some straight-to-video prequel to Cruel Intentions. That was a bad movie and then I saw her again in Catch Me If You Can and thought she was delightful. She took a long way to get to the top and it was worth it. Now we all love her.

Excellent review, I enjoyed how Down to Earth this film was and the subtlety. Amy Adams was simp,y a joy to watch, I wanted to reach through the screen and hug her.

@vinnieh-I know. She is just so full of charm and yeah, I wanted to hug her and give her lots of food for that pregnant belly of hers.

Oh you know what, I might've seen her in Catch Me If You Can before this one but totally forgot about it. Amy is such a chameleon actress!

@ruth-The first thing I saw her in was some straight-to-DVD prequel to Cruel Intentions. Awful film. She was lovely in Catch Me If You Can.