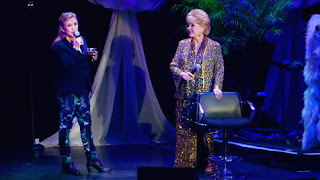 Directed by Alexis Bloom and Fisher Stevens, Bright Lights: Starring Carrie Fisher and Debbie Reynolds is about the unique relationship between actress/entertainer Debbie Reynolds and her daughter in actress/writer Carrie Fisher. The film follows the lives of the two women as Reynolds is about to receive the Lifetime Achievement Award from the Screen Actor Guild in 2015 while Fisher is working on Star Wars: The Force Awakens as the film feature rare footage and old interviews about the two as well as new footage of their life together before their tragic deaths in December 2016. The result is a dazzling and heartfelt film from Alexis Bloom and Fisher Stevens.

Shot from late 2014 to early 2015, the film follows the life and relationship of Debbie Reynolds and Carrie Fisher as they both live next door to each other while working on respective projects. The film follows the two on what they do together and separately yet remain close to each other no matter how turbulent their lives were. Notably through Reynolds’ marriage to singer Eddie Fisher in the 1950s were they were Hollywood’s It couple until Fisher left her for Elizabeth Taylor which was considered scandalous at the time leaving Reynolds to care for Carrie and son Todd while marrying a rich businessman in Harry Karl that ended in divorce in 1973 due to Karl’s compulsive gambling, drinking, and sleeping with hookers. For Fisher, she too would have a life of chaos through her own bipolar disease, drug and alcohol abuse, a messy marriage to Paul Simon, and all sorts of shit that also gave Fisher material to write that included the book Postcards from the Edge which was adapted into a hit film by Mike Nichols that was about Fisher’s own relationship with her mother.

Though Reynolds and Fisher were able to go through all that stronger than ever, the film follows the two as they deal with all sorts of things while they’re surrounded by a close entourage that includes Todd, his wife Catherine Hickland, Carrie’s daughter in actress Billie Lourd, Carrie’s assistant Abe Gurko, a former babysitter of Carrie, childhood friend Griffin Dunne, and a couple of dogs. The film follows the two and most of the entourage as they all tell stories about the two with Todd being the one who is given a lot to say as he talks about what his mother and sister both had to deal with as well as his father Eddie. The film also has some revelations about what entertainers used to continue to perform which Todd reveal was crystal meth as his father never knew what he was using as it would eventually destroy his career. The film also feature footage of Carrie seeing her father a few months before he died as well as an interview in 1995 between Carrie and her maternal grandmother about Reynolds.

The direction by Alexis Bloom and Fisher Stevens is quite simple as they’re aided by cinematographers Vasco Nunes and Billy Pena where it‘s shot with hand-held cameras and some hidden cameras to play into what Reynolds and Fisher do in their lives. Yet, there’s moments where there is action happening off-camera provided by sound editor Kate Bilinski as it relates to Reynolds being ill as Bloom and Stevens know not to have her on camera out of respect for her. Editors Penelope Falk and Sheila Shiraz would help Bloom and Stevens in gathering all of the home movie footage and newsreel about Reynolds‘ time in the limelight as well as footage from the films she and Fisher had both appeared in. The film’s music by Will Bates is playful as it play into the show tunes and pop that Reynolds was famous for as well as music that she sang in some of her films with Fisher singing along to those songs. The film would culminate with Reynolds receiving her lifetime achievement award from the Screen Actors Guild in early 2015 as it play into the bond she has with Carrie and the family that adores and care for them.

I haven't gotten a chance to watch this yet, but I probably will on HBO Go. I wonder, was it always meant to come out at this point? Or did they push up the release date? I had never heard of it and I watch a lot of HBO.

Like a lot of us, I've come across lots of stuff about them on TV, lately. Still, I definitely want to watch this doc.

I better watch Bright Lights before my HBO subscription expires in a couple of weeks. It's so heartbreaking these two are gone within a day of each other. Now I just read that Debbie died of brain hemorrhage from the stroke :(

@Brittani-It was supposed to be shown on TV in March but after what happened. They decided to release it much earlier as it came out this past Saturday and I recorded it and watched it yesterday. It's so fun to watch.

@Wendell-It's a must if you're a fan of both of these women as they are just the epitome of high-class entertainment.

@ruth-Watch it as soon as you can because it is such a joy to watch. For me, Debbie died of a broken heart in the way Carrie died as I think that contributed to the stroke and the brain hemmorhage. It is heartbreaking as watching the doc will make you feel sad knowing how close they are.

I don't have HBO but I'll definitely catch this at some point. Carrie was a wonderful and witty woman but in a way I grew up with Debbie, I remember her on some talk show when I was in my early teens-maybe Dinah Shore's-urging people to go see Carrie's new movie that was opening that weekend and how marvelous it was...that movie was Star Wars! HA!, so her going hit me harder.

I did a mini marathon of many favorites of her films, Tammy & the Bachelor, How the West Was Won, The Pleasure of His Company, This Happy Feeling and The Catered Affair the weekend after her passing but this would make a nice addition to them.

@joel65913-Aw, we're never going to have anyone like that ever again. Debbie was right, being normal is overrated. I've seen a few of her films and I think Turner Classic Movies is going to do a marathon of her films coming later this month. She was a treasure as was her daughter.

TCM is devoting a day to Debbie on the 27th with lots of good titles scheduled including some of those in my mini-marathon. I'm looking forward to the ones that are more rarely shown, It Started with a Kiss, I Love Melvin, Hit the Deck and The Mating Game.

They're also showing Bundle of Joy which has the distinction of not only being a costarring film with Eddie Fisher but she was pregnant with Carrie while the film was shooting. A real family affair!

@joel65913-Ah! Nice. A good way to celebrate Debbie. I wish they would include Behind the Candelabra as I really liked seeing her as Liberace's mother.