Thursday Movie Picks: Movies w/ Actors/Actresses Who Passed Away in 2016

For the third week of 2017 in the Thursday Movie Picks series hosted by Wanderer of Wandering Through the Shelves. We take a look at the previous year in the actors/actresses who sadly passed in the year that is best we don’t speak about. A year that was just horrible in a lot of ways considering how many cool people died last year. Here are my choices of films starring those who are no longer with us. 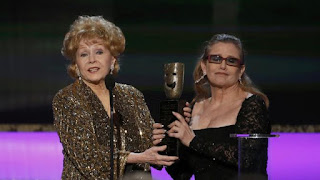 This is the most obvious choice considering that both Carrie Fisher and Debbie Reynolds had post left this great planet late last month and it still hurts. Fortunately, the documentary by Alexis Bloom and Fisher Stevens that just premiered earlier this month showcases this beautiful relationship between mother and daughter. How can anyone not love these two together as there’s some little moments in the film that is to be enjoyed such as the fact that they live next door or how Debbie refuses to retire no matter how much her health is waning? It’s a must-see for fans of both of these women. 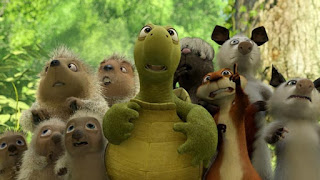 Garry Shandling is more known as a comedian and TV actor than films as he hasn’t really done a lot of great movies yet this animated film he’s in where he’s a turtle definitely features one of his most enjoyable performances. Especially as it’s got a very silly premise that is enjoyable for audiences of all ages about animals trying to cope that their forest had been cut in half in favor of suburbia where a renegade raccoon (Bruce Willis) helps them much to Shandling’s reluctance. It’s pretty funny with Shandling being a standout as it also includes a hilarious Steve Carrel as a hyperactive squirrel. 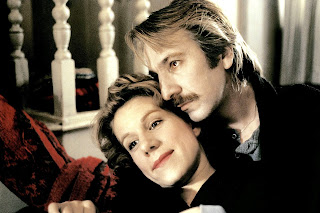 When it comes to Alan Rickman, there’s a lot of films that come into mind whether it’s Die Hard, Sense & Sensibility, Robin Hood: Prince of Thieves, Galaxy Quest, or the Harry Potter films. Yet, it’s the romantic-drama by Anthony Minghella co-starring Juliet Stevenson that is often overlooked. It’s the story of a woman coping with loss as she has difficulty moving on until she is visited by the ghost of her former lover, who is played by Rickman,. Rickman’s performance is key to the film as he is very comical and full of charm while also doing some amazing work on the cello.

There’s so many others in the world of entertainment that are no longer with us such as Michael Cimino, Abbas Kiarostami, Curtis Hanson, Prince, George Michael, and so many others. Yet, the biggest for me personally is David Bowie so I will close this part of the series with a hilarious cameo he gave in the film Yellowbeard:

Loving your choices!!...well I don't love animation so Over the Hedge isn't for me but glad Shandling received a mention.

Can't believe I haven't seen your main three!! I have seen Yellowbeard but so long ago my memory of it is sketchy. Bowie is SO young in it!

Bright Lights is high on my too see list but I don't have HBO so when it becomes available elsewhere I will definitely be watching. It would make a great double feature with Bundle of Joy. Not only is it the only costarring role of Debbie and Eddie Fisher Debbie was pregnant with Carrie while making it. Truly full circle!

Truly, Madly, Deeply is my biggest blind spot for Alan Rickman. I've long wanted to see it but it's so blasted hard to find! Thanks for reminding me about it my resolve to find it is renewed. Not only for him but I love Juliet Stevenson as well.

We actually match two performers but what has made this such an interesting week is that even when that's happened, and Alan Rickman is way out in front as the actor of the week, in all but one case everyone has chosen a different film so the variety is great.

This Happy Feeling (1958)-Debbie Reynolds-When her boss makes a pass at a party in the Connecticut countryside New Yorker Janet Blake (Debbie) dashes into the rain just as Bill Tremaine (John Saxon) is passing and offers a ride to the subway. When she misconstrues a comment Bill makes as a come-on she jumps out and makes her way to the nearest house which belongs to retired star Preston “Mitch” Mitchell (Curt Jurgens) which he shares with his live-in housekeeper, the tippling Mrs. Early (a hysterical scene stealing Estelle Winwood). Stuck and soaked to the skin she stays the night in his guest room but when Mitch’s lady friend, the droll Nita Hollaway (a standout Alexis Smith) stops by in the morning she assumes the worst. Mitch sets her straight and hires Janet as his secretary beginning a charming romantic comedy with Debbie falling for Curt while John falls for her and she being pulled one way and another while Alexis makes caustic remarks from the sidelines. Little known Blake Edwards comedy is a hidden gem and a first-rate showcase for Debbie’s special magic.

Sense and Sensibility (1995)-Alan Rickman- When the Dashwood sisters Elinor and Marianne (Emma Thompson & Kate Winslet) and their mother are forced to move out of their home by their brother’s rotten wife they move to a cottage on their cousin’s estate in the English countryside. There Marianne becomes enamored of the dashing Willoughby (Greg Wise) while the more sedate Colonel Brandon (Alan Rickman) pines for her. Meanwhile Elinor yearns for the unavailable Edwards Ferrars (Hugh Grant). There’s so much more in this top flight Jane Austen adaptation directed by Ang Lee but this is a great example of Alan Rickman’s versatility. Best known as the suave but ruthlessly evil Hans Gruber in Die Hard he is the complete opposite here and makes both characters fully formed people.

Me, Natalie (1969)-Patty Duke-Natalie Miller (Patty) is an average looking Brooklyn teen who has a developed a complex from her mother always telling her she’ll be beautiful someday so don’t worry about being plain now. Her traditional father’s no help, he’s bribed a nerdy family friend (Bob Balaban) to marry her so she can be the housewife he thinks is all she should or can be. Encouraged by her jovial Uncle Harold (Martin Balsam) she breaks free. Renting an apartment from the dotty Miss Dennison (Elsa Lanchester) in Greenwich Village she embarks on a sometimes rocky journey of discovery where she finds that being comfortable with herself is more important than how she looks. Somewhat heavy with late 60’s trappings but aside from The Miracle Worker this is Patty Duke’s best big screen performance. Al Pacino makes his screen debut in a short scene at a dance.

Silver Streak (1976)-Gene Wilder-While traveling to his sister’s wedding on the Silver Streak train easy-going George Caldwell (Gene) falls smack dab into murder and intrigue when he becomes smitten with Hilly Burns (Jill Clayburgh) the secretary of seemingly innocuous Professor Schreiner. When he thinks he sees a dead body thrown from the train it’s the start of a wild ride both on and off the train during which he partners up with escapee Grover Muldoon (Richard Pryor) who gets him in and out of one crazy situation after another. Mix of comedy, slapstick, thriller and adventure was the first and best pairing of Wilder and Pryor.

Aw Truly, Madly, Deeply, comes up in the best British films list and I am yet to see it. One for the blind spot list next year.

I really want to see the Debbie and Carrie doc - its looks beautiful. So tragic but they were both amazing.

I love your choices! I so want to see this documentary because, not only is it about these 2 great women and the love they had for each other but the way they speak with one another reminds me of how I was with my mom. My mom lived with me for 12 years before she had to go to long term care. We could bicker but to us it was just talking and people would laugh at our relationship but they also knew how close we were and are. I love Over The Hedge and found it such a cute film. I'm glad you chose Gary Shandling because I felt this very funny man was overlooked. Love Truly, Madly, Deeply! This is such a romantic, quirky, intelligent film and cemented my ardour for Alan Rickman

Truly, Madly, Deeply is a film one of my colleagues likes very much still yet to get round to seeing. The death Carrie Fisher and Debbie Reynolds were a devastating way to end the year. I might check that documentary out.

I need to see Bright Lights. Truly, Madly, Deeply is an interesting pick for Rickman. I haven't seen it, but I always remember the title. I'll have to check it out some time.

Truly Madly Deeply is such a sweet movie...it still saddens me we lost Alan, it was so unexpected

@joel65913-I've only seen Sense & Sensibility which is a film that I do love a lot as it's not just one of the finest Jane Austen film adaptations and one of Ang Lee's best films but the casting itself is pretty much perfect. Plus, Alan Rickman as Col. Brandon is just phenomenal. I knew that Garry Shandling needs to be mentioned though it was hard to find a good film that he was in.

@Katie Hogan-When it comes to Alan Rickman, we always think of the bigger films but I wanted to go for something different.

@Myrela-See Bright Lights as it is a bit devastating to watch knowing that they're gone but just seeing them together is so fun to watch.

@Brittani-Truly, Madly, Deeply in my opinion is one of the finest romantic films ever as it strays from the conventions and keeps it very simple. It's been a long time since I've seen it.

@assholeswatchingmovies.com-Yeah, the year we shall not speak of was shit because of too many cool people dying.

2016 really took some of the greats from us. I miss Alan Rickman, and I feel ashamed that I haven't seen Truly, Madly, Deep,y.

@vinnieh-Don't worry. You have some time. Believe me, if you show this film to a woman. It's likely you'll win her over and get a nice blow job.

2016 was a shocker for celebrity deaths and unfortunately it's probable the trend will continue in the next 10-20 years as the baby boomer generation gets older. If anything at all good can come of this then it's that a younger generation can become familiar with these artists legacies. For example today I discovered Racing Cars - They Shoot Horses Don't They (1976) , a tune I wouldn't have found without the commemoration to the producer Bill Price who died December 22nd. I wish I didn't find the music in that morbid way, but at least the music got rediscovered.

@Chris-I agree that it's going to get worse. It's just a shame that it became so sudden and a lot of it in a very tragic way.

I haven't seen Truly Madly Deeply either so that's something for me to look out for.

Hi, Just popped back to say thanks to your prodding my memory about it I managed to track down Truly, Madly, Deeply. LOVED IT! Both Alan Rickman and Juliet Stevenson were brilliant and it was more complex than I had expected. It great when you finally manage to track something down and it proves to be better than you thought it would be. So often it's a letdown but this one wasn't. Thanks for the nudge!

@Wanderer-See it as it isn't just one of these lovely romantic movies but you will see Alan Rickman in a performance that is unlike anything.

@joel65913-You're welcome. I'm waiting for it to come back on TV as it's been a very long time since I've seen it. It is such a lovely film.