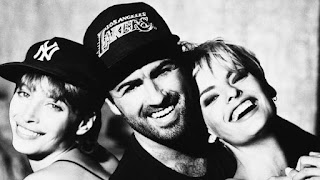 Directed by George Michael and David Austin, George Michael: Freedom is a documentary film about the life and career of the British singer who achieved fame as part of the pop duo Wham! with Andrew Ridgeley and later becoming a successful solo artist. Made largely in 2016 just before Michael’s shocking death on Christmas Day on that year with manager/friend David Austin completing the film. The film has Michael tell his own story through his own words with archival interviews and rare footage as well as testimonies from friends and musicians like Sir Elton John, Mary J. Blige, Stevie Wonder, Tony Bennett, Liam Gallagher of Oasis, Nile Rodgers, and Mark Ronson as well as friends such as James Corden, Ricky Gervais, Jean-Paul Gaultier, Kate Moss, Cindy Crawford, Linda Evangelista, Naomi Campbell, Tatjana Patitz, and Christy Turlington. The result is an engaging and evocative film from George Michael and David Austin.

With many films about artists who have passed, it’s often told from the perspective of those who knew that person or outsiders who had observed that person’s body of work. With George Michael just before his own untimely passing, he was fortunate to tell his own story through his own words as well as cultivating all of the footage of interviews and stuff he did in his lifetime as well as getting others to share their perspectives of the highs and lows he went through. The film mainly focuses on certain periods of his life such as his time in Wham! with Andrew Ridgeley where they didn’t take themselves very seriously in their approach to stardom. When the group split-up in 1986, it was a mutual decision as Michael knew that he had been yearning for solo stardom. When his solo debut album Faith was released in 1987, it was bigger than it expected to be as Michael admittedly felt overwhelmed by its massive success.

The film is broken into chapters as one devotes itself to his second album Listen Without Prejudice Vol. 1, the third chapter is about meeting Anselmo Felepa in 1991 who would be the love his life, the fourth is about Michael’s fight with Sony, and the fifth is the release of his third album Older and the aftermath of his life and career. Much of Michael’s struggle with the success of Faith had to do with his struggle over the persona he created as he just wanted to be a normal person people would see in the neighborhood and spend time with his dog. In making Listen Without Prejudice Vol. 1 in which several artists like Liam Gallagher, Mary J. Blige, Stevie Wonder, Nile Rodgers, Mark Ronson, Elton John, and comedian James Corden all reveal their favorite bits on the album. Music executives from Sony in Britain talked about why Michael chose not to promote it as it had to do with him wanting to take a step back and just take some time off for himself. The people at Sony from the British and European division made the effort to promote the album for Michael which did extremely well but in America is where things soured.

The artists and British executives all felt that Michael was treated unfairly by the American division in Sony who stated that he was an artist for a certain demographic and had to cater to that demographic as well as do tours, music videos, and all sorts of things. Michael refused as the video for Freedom ’90 that was directed by David Fincher and featured supermodels Cindy Crawford, Naomi Campbell, Tatjana Patitz, Christy Turlington, and Linda Evangelista lip-syncing the song was made with Michael’s involvement but it wasn’t enough for the American division at Sony. The film would unveil footage and testimonies from the British executives who felt that Michael’s suit against Sony was bad for all sides as they felt they let Michael down. Even though Michael would lose his lawsuit against Sony in 1994, many felt that Michael’s stand did help provide artists the chance to say something towards the record companies they were working for.

Many of the interviews were shot by cinematographer Graham Smith and recorded by sound recordist Julian Wilson under David Austin’s direction as they all give their testimonies as well as look at a vinyl record of Michael’s second album to listen to. Blige, Wonder, and Rodgers also discuss Michael’s love for soul music as they felt the criticism he received in the late 80s when Faith was big and winning awards in the R&B/Soul category was unfair when he was actually faithful to the genre. Michael, via audio, understands the criticism as it only added to the anxieties he was dealing during the tour for Faith. Editors Jerry Chater, Gene Limbrick, and Gwyn Moxham would cultivate the many footage and interviews in the film along with some rare home movie footage including Michael’s time with Felepa as well as some rare behind-the-scenes footage of a few music videos that were being made.

At the heart of the film is the music as it showcased how wide-ranging Michael was with the music whether it’s through pop, hip-hop, rock, soul, folk, jazz, and bossa-nova. It showed that gift he had for making great music as well as being someone who was able to create his own voice and legacy. At the same time, he never took himself seriously as he wasn’t afraid to make fun of himself as well as be generous to others. Overall, Michael created a film that showed who he was and not afraid to show his flaws with the help of his friend David Austin creating what was to be Michael’s final artistic piece.

I can't believe I didn't know this existed. You know I'll be checking it out!

@assholeswatchingmovies.com-See it. Especially if you're a fan of George Michael. Anyone who doesn't like George Michael will be thrashed. He will always be a fucking superstar.

I heard the new George Michael documentary glosses over some of the negative aspects of Michael's life, but I'll probably watch it and make up my own mind. Glad you enjoyed the doc. As you say, he had a gift ( as a performer/songwriter)

@Chris-Actually, it doesn't gloss over a few things because Michael admits that he's flawed and he actually owned up to some of the things he did. Yet, this doc doesn't talk about his arrest in Los Angeles in the late 90s nor some of the things he had done before his death but it does show that he can make fun of himself as well as make fun of his troubles such as that cameo he did in Extras.