For the third week of October 2017 as part of the Thursday Movie Picks series hosted by Wanderer of Wandering Through the Shelves. It’s the third week of the Halloween edition of the series as the focus is on body horror. A sub-genre that has been very popular as it involves people dealing with something wrong with their bodies or given something that belonged to someone else and a bunch of crazy shit happens. Here are my three picks:

From the master of the body horror sub-genre is a film that can only come from the mind of David Cronenberg. The film revolves a man wanting to get racy material for his channel only to get more than he bargains for when he discovers the world of snuff films and hallucinations which would affect his body. It’s a film that feature some incredible makeup effects courtesy of Rick Baker as it showcases man’s desire for extreme as well as what happens when technology and humanity merge. Long live the new flesh.

A funny horror-comedy in the late 90s involves a slacker whose right hand becomes possessed due to the fact that he’s lazy where his hand forces him to kill people including a couple of his stoner friends who come back from the dead to help him get rid of this cursed hand. It’s a silly film that is very funny which features a young Jessica Alba looking very sexy though why is she dancing so badly to a Ramones song? It’s a film which doesn’t require a lot of brains as it is just good fun. 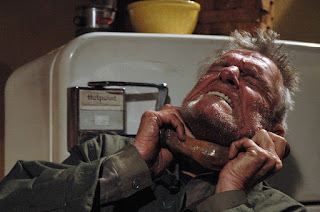 I've only seen Videodrome and was really, REALLY close to picking it. I love everything about that movie. Great call.

OH man Idle Hands, I haven't seen that movie in ages. I loved it when I was a teenager. I love that pick.

I've only seen Videodrome, which is of course great - though that's another one I'm not planning on rewatching anytime soon. Great picks, One-Eyed Monster sounds ridiculously funny

One Eyed Monster? Hahahaaaaa. Now that is something I have to see for the absurdity of it and what the hell is Charles Napier doing in it? He must have needed the money badly. Idle Hands sounds too funny -bad movie but funny. I still have not seen videodrome...one day I will:)

I haven't seen any of these, but a couple of your descriptions made me laugh out loud. I need to track down Idle Hands and One-Eyed Monster.

@Sati-It's still my favorite film by David Cronenberg and I just love every second of it.

@Sofia de Costa-I can see why you're not eager to re-watch it. It's intense. One-Eyed Monster is hilarious if you don't take it seriously.

@Birgit-Charles Napier doesn't need the money but he'll just take anything as long as it has some worth. It's a hilarious film.

@Stephanie Marshall Ward-One-Eyed Monster itself sells what it aims to be. After all, it's about time Ron Jeremy's penis finally gets to do to something that isn't sexual.