For the 29th week of 2018 as part of Wandering Through the Shelves' Thursday Movie Picks series hosted by Wanderer. We focus on the subject of parents. Not the ones who bring love and guide the children but the ones who are bad and do horrible things to their kids like Joe Jackson to his kids including Michael and Janet. The fucker just died and honestly, good fucking riddance. Here are three picks:

Joan Crawford is unquestionably Hollywood royalty who gave us great performances in all sorts of films. Yet, behind the scenes. She was an evil bitch to her two adopted children and when she died, she left them nothing but that didn’t stop her adopted daughter Christina to write a tell-all that became one of the most over-the-top and campiest films ever made. With Faye Dunaway as Joan Crawford and Diana Scarwid as the teenage/adult Christina, the film is fucking nuts from start to finish. What Al Pacino did in Scarface for aspiring actors is exactly what Dunaway has done for aspiring actresses with this film. NO WIRE HANGERS EVER!!!!!!! 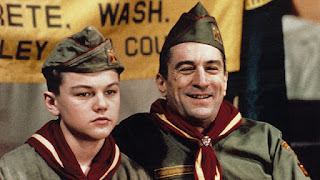 Based on Tobias Wolff’s memoir, the film that would give the film world a proper introduction to Leonardo DiCaprio as Wolff is this compelling film about a mother and her son being part of a new family with Robert de Niro playing the insecure and vicious Dwight Hansen who is essentially the stepfather from Hell. Hansen would often beat Wolff and try to toughen him up every way he can but still remains a fucking asshole. One notable scene involving an empty jar of mustard as it was brutal to see de Niro press that jar of mustard on DiCaprio as there’s mustard stains on his face. It is a tough film to watch but certainly powerful. 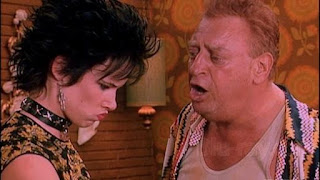 From Oliver Stone comes a film that is definitely insane in every sense of the word from a story by Quentin Tarantino as it would feature Rodney Dangerfield in one of the most shocking performances of his career. Playing Juliette Lewis’ dad, Dangerfield is darkly-comical in the way he presents himself and berates Lewis by calling her a stupid bitch as well as showing that he doesn’t just verbally abuses her. He is also cruel to his wife who doesn’t even stop the abuse as their fate would eventually come as it help add to the legend of Mickey and Mallory Knox in the film which remains notorious but also unlike anything since its 1994 release.

Though much of it has been discredited there's no question that Joan Crawford was a troubled deeply flawed woman who shouldn't have had children, adopted or otherwise. While it was ridiculed on release and did much damage to her career Faye is fierce and fearless in her performance.

I've only seen bits of This Boy's Life. I want to see it from the beginning so I've never stuck with it when I've run across it. Someday.

Well fortunately this week had many more films to choose from than last which seems to have added a lot more variety.

The Manchurian Candidate (1962)-At the Korean War’s conclusion a group of American prisoners return home including Captain Marco (Frank Sinatra) and Sergeant Raymond Shaw (Laurence Harvey) who though thoroughly disliked by the men is hailed by them as a hero for vague reasons. Upon his arrival Raymond is met by his mother Eleanor Iselin (a mesmerizing Angela Lansbury) a political dragon and completely soulless monster who has internecine plans and has had Raymond brainwashed as an unknowing assassin to accomplish them. Marco senses something foul is afoot and tries to intervene before it’s too late.

The Anniversary (1968)-Though widowed a decade ago Mrs. Taggart (Bette Davis) insists on her three sons and their families commemorating the event at the family mansion where she proceeds to shred their self-worth by taunting them with secrets she has discovered and savagely holds over them to hold them in her thrall. Bette as the one eyed Mrs. Taggart (she has designer eyepatches in colors matching her outfits!) has a whale of a time raising hell and chewing scenery right and left.

Matilda (1996)-Adaptation of Roald Dahl story of Matilda Wormwood (Mara Wilson), a brilliant young girl plagued by her crude, coarse often vicious father (Danny DeVito) and mother (Rhea Perlman). On top of that Matilda is also tormented by Agatha Trunchbull (Pam Ferris), the evil principal of her school, a terrifyingly strict bully. When Matilda realizes she has telekinetic powers the tables turn and she begins to defend her friends from Trunchbull's wrath and fight back against her unkind parents.

I was very close to picking Mommie Dearest and Natural Born Killers. Both are such perfect fits. Haven't seen your other pick.

I haven't seen any of these but I'm interested in seeing This Boy’s Life.

These are, yes, perfect fits. It's dawning on me though just how vast this topic is.

Hell yes for This Boy's Life and NBK. Once you see Dangerfield in NBK, you cannot forget him. I love the way Oliver Stone shot all of those scenes. What a ballsy choice.

Mommie Dearest is the big one this week and we match with this movie. I love your critiques of these films. I have not seen the one with Robert De Niro but it sounds like a good film and a disgusting person. I love Rodney Dangerfield but seeing him in this film was unnerving. he was excellent as the brute ass father.

@joel65913-I don't care if someone has mental illness or not, the fact that she beat those kids and left them penniless in the end was still an awful thing to do. Matilda is a damn good choice and certainly an underrated film among adults.

@Wendell-Man, you will hate de Niro in this film because he is such an insecure asshole.

@Sonia-See it because this where we see the early promise of Leonardo diCaprio.

@Jay-It is a vast topic as it could be anyone.

@Alex-I was in shock when I saw Rodney Dangerfield as for years, I always saw him as a loveable guy that always made hilarious insults. I was 14 when I first saw it on TV and I was like "what the fuck?" It made me feel unclean and uncomfortable in the way he was groping Juliette Lewis. It's a shame he never went further with that and just stuck to what he's known for which by that time had become dated.

@Birgit-This Boy's Life is a film that needs more exposure as it's a must for anyone that loves Leo and de Niro as they're both great in this and you'll also see an early appearance of Tobey Maguire.