Thursday Movie Picks: Characters Who Magically Age Up or Down

For the 28th week of 2018 as part of Wandering Through the Shelves Thursday Movie Picks series hosted by Wanderer. We delve into characters who either grow up to be older or to be younger by some idea of magic or something. It’s often a plot device that often creates ideas of humor or an understanding for characters to either face what might or return to their youth. Here are my three picks:

From Robert Zemeckis comes one of the finest comedies of the 1990s that pits Meryl Streep against Goldie Hawn for the affections of an alcoholic Bruce Willis. Streep plays an aging diva who learns that Hawn has lost weight and has become beautiful with Willis falling for Hawn all over again. Streep learns about a potion that makes her younger and live forever but there’s a catch which she and Hawn both find out as there’s a lot of shenanigans that goes on. It’s a film that still holds up with visual effects that may be dated for its time but it did help tell the story of what happen when two women try to kill each other for a man and to live forever.

A 13 year old girl on her birthday wants to be accepted by the cool kids and hopes the cutest boy kisses her. Instead, she gets upset and wishes to be thirty and flirty where she becomes a woman in her 30s working for a flailing fashion magazine and isn’t nice to people. It’s an enjoyable comedy with a winning performance from Jennifer Garner who definitely proves she can be funny and full of charm as she’s aided by top-notch supporting performances from Mark Ruffalo, Judy Greer, and Andy Serkis who steals the show as Garner’s boss who does the Moonwalk. 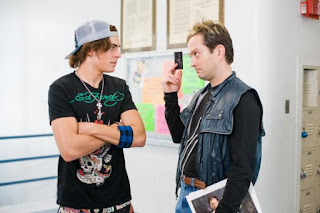 A light-hearted comedy that has Matthew Perry lament over his failure in life and in his marriage where he felt he peaked when he was 17 as he falls into a whirlpool and becomes Zac Efron. It’s a film where a man is given a second chance as a 17-year old to fix his life as well as help his teenage kids with growing pains as it’s a light-hearted film that include a hilarious supporting turn from Thomas Lennon as his best friend who pretends to be Efron’s dad as he falls for the school’s principal that has a love for Lord of the Rings. It’s a formulaic film but Efron is what makes the film a joy to watch.

I need to see Death Becomes Her.

Before I changed directions, I was definitely picking Death Becomes Her. So glad it wasn't left out this week. The other two movies I like okay.

Death Becomes Her is a great catch and one that I didn't even think about. All three stars really give it everything they have, which is quite substantial. Sad to realize now it was almost the last good film Goldie made, hopefully she'll find something else worthy of her time to finish off her career-Snatched sure wasn't it!

13 Going on 30 is everywhere today. It was cute but I didn't love it as much as others seems to.

We match on 17 Again! I thought it middling but this week was a hard one to come up with picks and it at least didn't stink.

As I said this was a tough week. I was surprised how little this particular theme has been used when you separate body switching films from the mix. Anyway I did manage three just barely.

Big (1988)-After being denied admittance to a carnival ride 12 year old Josh Baskin (David Moscow) makes a wish he was big on an antique fortune telling machine. He wakes up the next morning to discover his wish has come true and he is now a 30 year old man (Tom Hanks). Panicked he finds his best friend Billy, convinces him of the truth and they go on a hunt for the machine while Josh hides out in New York. By luck he gets a job in a toy company and because of his innocence manages to shoot up the corporate ladder with amazing speed while discovering romance with Susan (Elizabeth Perkins), another exec at the company. Beguiling comedy with assured direction by Penny Marshall and captivating performances by the cast none more so than Hanks.

The Curious Case of Benjamin Button (2008)-In 1918 a child is born with all the characteristics of an old man and over the course of his lifetime ages backwards. Complicated fantasy has a gossamer sheen and thoughtful performances by Brad Pitt and Cate Blanchett and an extraordinary one by Taraji P. Henson as his caregiver Queenie.

17 Again (2009)-Mike O’Donnell (Matthew Perry) had to abandon his dreams 20 years ago when his girlfriend became pregnant and they wed. He is now unemployed, estranged from his wife and children and living with a friend but an encounter with a stranger allows him to suddenly be 17 again (where he’s played by Zac Efron) and a chance to try and fix all that went wrong. It sounds heavy but it’s played for comedy.

We match 13 Going on 30 and 17 Again. Death Becomes Her is easily my favourite of the three. It is so funny and the special effects are still effective.

Death Becomes her is a great pick and a unique choice. 13 is everywhere today and it is a fun movie. I haven’t seen 17 Again because, aside from Friends, I can’t take Matthew Perry that well

Great pick with Death Becomes Her...never even thought of it.

@Wendell-I'm glad someone else thought of that film as I thought it was awesome.

@joel65913-I thought of Benjamin Button and Big but those are the obvious choices.

@Sonia-Agreed on Death Becomes Her as it is hilarious.

@Birgit-I'm not a fan of that show Friends. Never cared for it.

@Wanderer-It is an offbeat take on the subject but certainly fits the bill.