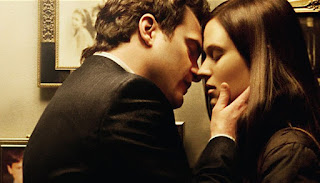 Inspired by Fyodor Dostoyevsky’s short story White Nights, Two Lovers is the story of a man who returns home to New York City as he finds himself engaged to a woman when he falls for a neighbor. Directed by James Gray and screenplay by Gray and Richard Menello, the film is an unusual romantic triangle where a man finds himself falling for a beautiful woman but also wants to be a good man to his fiancé. Starring Joaquin Phoenix, Gwyneth Paltrow, Vinessa Shaw, Elias Koteas, Moni Moshonov, and Isabella Rossellini. Two Lovers is a rapturous and intoxicating film from James Gray.

The film revolves around a troubled man who finds himself in a love triangle with a beautiful neighbor he’s fallen for and a woman whose father wants to buy his parents’ laundromat business. It’s a film that plays into a man dealing with not just in love with two different women but also the fact that he’s still reeling from heartbreak as he is unsure of what to do. The film’s screenplay by James Gray and Richard Menello opens with Leonard Kraditor (Joaquin Phoenix) walking near a creek on his way home as he thinks about his former fiancée who broke up with him as he jumps off a bridge in a suicide attempt. He is saved but still has to return home unaware that his parents are having a meeting with the people who are going to buy their laundromat as they’re bringing in their daughter Sandra Cohen (Vinessa Shaw) who is fascinated by Leonard. During this time he’s dealing with his family’s business being bought, he meets a neighbor in Michelle Rausch (Gwyneth Paltrow) as they hang out and such as he’s unaware of how troubled she is.

Throughout the course of the script, Leonard is being pulled into two spectrums as he is often leaning towards Michelle because they both share emotional and mental troubles as Leonard is still coping with a break-up as it forced him to move back to his parents. Yet, his time with Michelle would often lead to a lot of questions than answers as she is having an affair with a married law partner in Ronald Blatt (Elias Koteas) that is becoming tumultuous. It’s a relationship that is problematic yet Leonard does find himself courting Sandra who is a more grounded person and very kind but also doesn’t want to make him uncomfortable as it relates to his previous break-up. Plus, her parents like him and his parents like her a lot where they attend family events and such as he feels more relaxed around her. Still, he is enamored with Michelle who wants his help as it relates to her relationship with Ronald with Leonard’s mother Ruth (Isabella Rossellini) watching from afar.

Gray’s direction is low-key as it doesn’t emphasize too much on style in favor of aiming for an intimate story of a man torn between two women. Shot mainly on the Brighton Beach area in Brooklyn in New York City with some of the films shot on New York City, the film does play into this environment that is largely working-class but also a world that is also vibrant. Gray would use some wide shots for some of the locations including some scenes on the apartment rooftop in a few conversation scenes between Leonard and Michelle that is presented on an entire take in one shot with a few more to follow in medium shots and close-ups. Yet, much of Grey’s approach of the film is to shoot it in many rooms and apartments as well as real locations around Brooklyn to play into this world these characters live in but also one that is prospering as far as Leonard’s father Reuben (Moni Moshonov) is concerned knowing that his family laundromat is going to be a part of something big with Leonard having something to fall back on since his aspirations as a photographer hasn’t gone anywhere.

Gray’s direction also play into the idea of longing since Leonard and Michelle live in the same build but across from each other’s window as it adds intrigue to their relationship whenever they talk on the phone as Ruth is supposedly hearing the conversation though she isn’t seen. Gray’s direction also play into this temptation where Leonard is attending a Bar Mitzvah for Sandra’s brother as he spends all of his time there but gets a call from Michelle whom he sees later as Gray would make the choice of having Michelle and Sandra never meet each other though the latter does know about the former due to conversations with Leonard. The film’s climax relates to Leonard’s decision about his future and his love life as it would play into the idea of safety in Sandra or to risk it all with Michelle. Overall, Gray crafts a tender yet intoxicating film about a man torn between two women he is in love with.

Cinematographer Joaquin Baca-Asay does brilliant work with the film’s cinematography as it emphasizes on mood for its usage of sepia-based lighting for many of its interiors and scenes set at night along with more blue-grey colors for a few daytime exteriors including a scene at a restaurant with Leonard and Sandra. Editor John Axelrad does excellent work with the editing as it is straightforward to play into the drama with a few rhythmic cuts to play into some of the film’s emotional moments. Production designer Happy Masse, with art directors Marc Benacerraf and Pete Zumba plus set decorator Carol Silverman, does fantastic work with the look of the apartment that Leonard’s family lives including his messy room as well as the apartment that Michelle lives in.

Costume designer Michael Clancy does nice work with the costumes as it is largely straightforward for its Christmas holiday setting with the exception of a few stylish clothes that Michelle wears as well as a New Year’s Eve dress that Ruth wears. Sound designer Douglas Murray does superb work with the sound as it play into the atmosphere of a few party scenes as well as the sparse and quiet sounds for some of the scenes at the apartment rooftop. Music supervisor Dana Sano does terrific work in assembling the film’s soundtrack as it include some classical pieces for the film’s score as well as a mixture of hip-hop, opera, and jazz music to play into the world that the characters are in.

The casting by Douglas Aibel is wonderful as it feature some notable small roles and appearances from Anne Joyce as Leonard’s former fiancée in a dream sequence and in picture, Iain J. Bopp as Sandra’s little brother David, Samantha Ivers and Jeannie Serrales as a couple of Michelle’s friends, Julie Budd as Sandra’s mother Carol, and Bob Ari as Sandra’s father Michael who would make an offer to Leonard about his future at his company. Elias Koteas is terrific as Ronald as Michelle’s married lover who is concerned about her well-being as he asks Leonard to keep an eye on her. Moni Moshonov is superb as Leonard’s father Reuben as a man that is trying to uphold his deal in this merger as well as ensure that his son would not have to worry about his future.

Isabella Rossellini is fantastic as Leonard’s mother Ruth who is concerned about her son’s well-being as she is also wondering what is going on as she seems to know about his affair with Michelle as it’s a very low-key yet mesmerizing performance. Vinessa Shaw is amazing as Sandra Cohen as a woman whose father is buying Leonard’s family business as they start off as friends and eventually lovers as she is a woman that is kind and understanding but also someone who is willing to help him. Gwyneth Paltrow is brilliant as Michelle Rausch as a woman who lives in the same apartment as Leonard as she is someone who is charming and fascinating but also troubled due to her love of drugs and alcohol to cope with her own emotional troubles. Finally, there’s Joaquin Phoenix in an incredible performance as Leonard Kraditor as a man still reeling from heartbreak as he finds himself falling for two women as he deals with the decision he’s in but also the prospect of his own future as it’s a restrained and charismatic performance Phoenix.

Two Lovers is a phenomenal film from James Gray that features great performances from Joaquin Phoenix, Gwyneth Paltrow, Vinessa Shaw, and Isabella Rossellini. Along with its supporting cast, gorgeous locations, riveting story, and beautiful visuals, it is a romantic film that doesn’t play by the rules as well explore the idea of security and heartbreak in a romance. In the end, Two Lovers is a sensational film from James Gray.

Somehow this one sneaked by me. Feel like I have to see it, especially since that cast is bananas.

I remember when this film came out, but I don't recall any reviews or buzz about it. I probably skipped it because of Paltrow but it sounds pretty decent.

@Wendell-The cast is great as this came out around that time Joaquin Phoenix chose to retire as it came and went.

@Brittani-I'm not fond of Gwyneth either as a person as I think she's a stuck-up entitled bitch but she is still a damn good actress and is excellent in this.

Great review. I'm a big admirer of James Gray's films, but I think this is my favorite. It's arguably his most simple, but, to me, his most touching.

@Alex-Right now, The Immigrant is my favorite as this one was really good. I just finished watching his entire feature-film filmography as he's definitely someone that needs more exposure.