For the 38th week of 2018 as part of Wandering Through the Shelves' Thursday Movie Picks series hosted by Wanderer. We venture into the subjects of farms whether it’s films about farming or films that are set in farm lands. Here are my three picks:

1. The Tree of Wooden Clogs 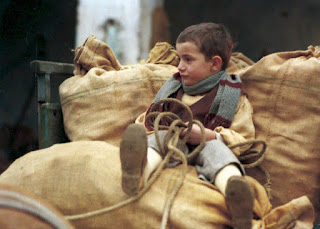 The 1978 winner of the Palme d’Or at the Cannes Film Festival from Ermanno Olmi is truly one of the most fascinating films about farm life set just a couple of years before the 20th Century at the Bergamo region of Northern Italy. The film focuses on the lives of four farming families who work on land for a greedy landlord. It’s the study of the lives of these families set in the course of a year as they work and deal with a lot of hardships but also try to maintain an idea of community despite this emergence of change coming including ideas of socialism which the farmers are indifferent to. It’s a long film but an enriching one that showcases a way of life that is lost through ideas of greed and progress. 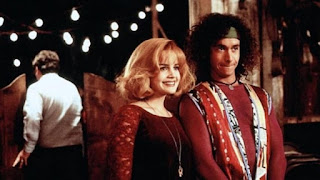 While the film doesn’t exactly fit the bill with the subject as it’s more about a girl from the Midwest traveling to California to go to college only to return to her home for Thanksgiving with her wild resident advisor. It is still set partially in the farm where Pauly Shore plays the resident advisor who learns about the idea of farming and embraces it through his own means such as feeding the pigs, cleaning up the shit, fixing the fences, milking cows, and cutting up some corn with the big-ass tractor. It’s one of the better films that Pauly Shore has been in during that brief run in the 1990s where he was a big comedy star. 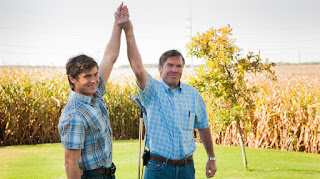 From Ramin Bahrani comes a film that is about the modernization of farming as well as a man trying to expand his business only to get himself into trouble. Yet, it’s really more about a father and son at odds with ambition as the latter wants to be a race car driver and not take part in the family business although he knows a lot about what to do and move it forward. It’s a complex film that is one of Bahrani’s more accessible films so far yet it also showcases this idea of America that is coming to grips with the 21st Century and the need to adapt or die which does put a lot of pressure to farmers who are struggling with the way things are as of 2018.

I'm 0-3 for your picks this week. That first one sounds the most intriguing to me.

Haven't seen any of these. Son-in-Law is the only one I've even heard of, but with Pauly Shore, I just can't.

Sad to say that even though I've heard of all three the only one I've seen is the Pauly Shore movie! Geez Louise that makes me depressed!! At least I didn't purposely set out to watch that one, I was at a friend's with a group of people and they decided to watch it and I was stuck. The other two are on my list to see though.

I had intended to do a theme within the theme and have an all 1984 farm theme since there were three farm films that came out in a group that year-Country with Jessica Lange, The River with Sissy Spacek and Places in the Heart with Sally Field and all three actresses were Oscar nominated but they are such a dour lot I stuck with Sally's film since it was the one I liked best and looked for lighter fare for my other two.

Summer Stock (1950)-Jane Falbury (Judy Garland) and her faithful housekeeper Esme (Marjorie Main) are struggling to keep the family farm afloat. One day Jane’s errant sister Abigail (Gloria De Haven) shows up with the news that she’s has been cast as the lead in a new musical. Oh and by the way she’s brought the entire troupe including her fiancée, the show’s director Joe Ross (Gene Kelly) with her to rehearse in the barn! After some persuasion Jane lets them proceed with the proviso that they trade chores for room and board. Everything goes bumpily along until Abigail departs in a snit and Jane is convinced to step into the lead. She’s reluctant but since she’s Judy Garland at the peak of her powers it goes well. Breezy if minor musical contains several iconic numbers, Judy & Gene’s challenge dance, Gene solo dance with a newspaper and most of all Judy’s infamous Get Happy number (filmed two months after the rest of the film with a 20 pounds lighter Garland). For something so light it was a nightmare to make taking six months to complete rather than the expected six weeks because Judy was coming apart at the seams (watch her weight fluctuate noticeably from scene to scene and entire backdrops change abruptly from scenes pieced together). For all the turmoil it’s a very pleasant film, Judy’s last at MGM.

The Egg and I (1947)-City slickers Betty & Bob MacDonald (Claudette Colbert and Fred MacMurray) head to the country to fulfill Bob’s dream of being a chicken farmer. Comic complications ensure with many rude shocks when they discover the farm is more or less a shack and the chicks are far more demanding than expected. Bob catches the eye of the rich neighbor farmer lady and Betty seeks solace and consul from their other neighbors, Ma & Pa Kettle (Marjorie Main & Percy Kilbride-who spun off into a successful series of B movies). Based on a bestseller by the real Betty MacDonald.

Places in the Heart (1984)-Suddenly widowed in Depression era Texas Edna Spalding (Sally Field) decides to make her small farm pay by bringing the first bale of cotton to market with the help of drifter Moze (Danny Glover), her blind boarder Mr. Will (John Malkovich) and her two young children. Facing many, many obstacles Edna perseveres against daunting odds. Sally won the Best Actress Oscar giving her famous “You like me! You really like me!!” acceptance speech.

I haven't seen any of these. They seem so different - weird that such a theme unites them.

The first film you mentioned sounds amazing. I liked The River which featured Sissy Spacek.

I haven’t seen any of these unfortunately. I’m not sure I can sit through a whole movie with Pauly Shore in it.

The only one I've seen is At Any Price, it was ok.

@Brittani-It's a long film at over three hours but certainly worth watching.

@joel65913-That was one of Pauly Shore's better films.

@Jay-Well, there's so many films set in farms.

@vinnie-I've heard of The River but I haven't seen it.

@Birgit-Son-in-Law is actually one of the better films that Pauly Shore was in. At least he wasn't Carrot Top.