For the 36th week of 2018 as part of Wandering Through the Shelves' Thursday Movie Picks series hosted by Wanderer. The subject is on something that I’m sure a lot of people can relate to which is being the new kid at school. A theme that has inspired all kinds of films whether it’s comedy, drama, or something else. Here are my three picks:

1. Rebel Without a Cause

The film that defined teenage rebellion as well as being iconic in a lot of ways is Nicholas Ray’s film about a young man who feels like he can’t do anything right no matter where he is. As the new kid in school, he’s not sure what kind of trouble he would encounter yet it always seems to follow him as he pisses off some gang leader while wooing the gang leader’s girlfriend and befriending another student who has a crush on him. There’s a reason why it’s a film that still resonates with audiences today while there is still no one as cool as James Dean. 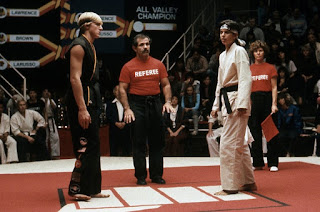 The 1980s classic that definitely became a favorite for anyone who grew up during those times and learn karate through cleaning cars, painting houses, and all sorts of chores. For anyone that had seen the recent YouTube spin-off in Cobra Kai would definitely get a different perspective of what the film is really about. We have guy who is about to become a senior and wants to do good despite the fact that he broke up his girlfriend but wants to get back with her. Instead, some punk kid from Jersey who is the new kid in school steal that guy’s girl and get into his business while causing all sorts of trouble. Especially in ruining that guy’s marijuana joint. That’s right folks, Daniel LaRusso is the villain and John Lawrence is actually the good guy. 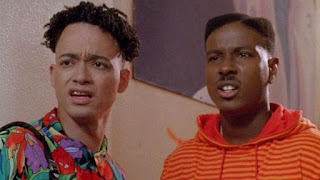 What happens when a notorious juvenile runs into a top-ranked academic student at a new school where they’re both the new kids in school? Well, some strange shit happens during a scuffle as their pictures get switched into each other’s files as the juvenile is put into smart classes while the academic nerd is with kids who are likely not to have a future. Starring Kid n’ Play, it’s one of the more underrated films of the 1990s where the nerd learns to embrace athletics, hip-hop, women, and taking matters into his hands while the juvenile realizes he has a lot to more to offer with his street smarts and broaden his horizons. Add a hilarious Pauly Shore cameo and you got yourself a film that is just fun.

I haven't seen the third but I like the first two. The original Karate Kid is charming in a way none of the others are and I love when he goes to the costume party dressed as a shower. Rebel fits perfectly and I know its venerated but of James Dean's three pictures I think he's better in East of Eden and that remains my favorite of the trio.

I tried to steer clear of teen comedies about the new kid but that ended up narrowing my options more than I thought it would still I managed to find two dramas and a very black comedy.

Lord Love a Duck (1966)-Pretty, pert and madly ambitious Barbara Ann Greene (Tuesday Weld) is the new girl at Consolidated High (overseen by Principal Harvey Korman) who befriends outsider prodigy Alan "Mollymauk" Musgrave (Roddy McDowell) who is dazzled by her and sets out to make all her dreams come true. That begins innocuously with her admission to an exclusive girls club within the school but rapidly escalates to far more formidable plans calling for drastic measures which her eager acolyte gleefully pursues. The blackest of black comedies with a cast including Ruth Gordon and an excellent Lola Albright as Barbara Ann’s cocktail waitress mother this study in absurdity’s skewed viewpoint isn’t for everyone.

Au Revoir les Enfants (1987)-When three new students, including Jean Bonnett (Raphael Fejto), arrive at his French boarding school during WWII Julien (Gaspard Manesse) doesn’t take much notice of them thinking they are no different from the other boys. What Julien doesn't know is that they are Jews passing as Gentiles trying to evade capture by the Nazis. While headmaster Père Jean (Philippe Morier-Genoud), works to protect the boys from the Holocaust the at first antagonistic Julien and Jean develop a tight bond. Louis Malle’s deeply moving film captures the idiosyncrasies of boyhood, structured education and the fear of a creeping menace.

I love Rebel but already chose that this past year so I’m glad someone else chose it. I have yet to see The Karate Kid and have had plenty of times to see it but never felt like wanting to see it. I don’t know about the last movie and not sure about it.

I've seen your first two picks. I hated Rebel and I haven't seen Karate Kid since I was a kid myself.

I was not expecting to see Class Act this week. Great call. It is a fun movie. And can't go wrong with The Karate Kid. Just watched Rebel a few days ago, but it wasn't really my cup of tea. I didn't hate it, but I didn't love it, either.

Cracking choices, especially Rebel Without a Cause.

I totally forgot about Rebel and I didn't even remember that Daniel was ever the new kid.

@joel65913-Au Revoir Les Enfans is a film I didn't really think about but man, it is one of the best films that I had ever seen. I saw bits of My Bodyguard but not enough to give it a full opinion.

@Birgit-Class Act is merely a product of the 90s and will look dated but it's a film that I like for just how silly it is.

@Brittani-I think it's time to re-watch The Karate Kid but with a different perspective if you've seen Cobra Kai.

@Wendell-I can understand why you're not into Rebel. It's melodrama and that's not for everyone.

@Wanderer-Well, if you've seen Cobra Kai. You know it's really about the new kid just getting involve in other people's business and causing trouble.