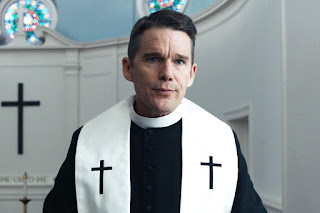 Written and directed by Paul Schrader, First Reformed is the story of a Protestant minister who deals with a declining attendance in his church while coping with his own identity and faith in these trying times. The film is a study of a minister who is dealing with his crisis of faith as well as what faith is becoming in a world that is ever-changing. Starring Ethan Hawke, Amanda Seyfried, Victoria Hills, Michael Gaston, and Cedric “the Entertainer” Kyles. First Reformed is a haunting yet evocative film from Paul Schrader.

The film follows a minister, whose church is about to celebrate 250 years, is dealing with a crisis of faith not just with his own being as well as his health but also a declining attendance of the church as one of its visitors comes to him for help as it relates to her husband. It’s a film that play into a world that is ever-changing as this minister is trying to deal with the reality around him but also this sense of hopelessness in this world. Paul Schrader’s script follows Reverend Ernst Toller (Ethan Hawke) who runs the First Reformed church at a small town in upstate New York where he notices a declining audience as many of the locals go to a nearby megachurch run by Pastor Joel Jeffers (Cedric Kyles) who owns the historical landmark where the First Reformed is where Toller goes to Jeffers for counsel. The main bulk of the narrative revolves around Toller trying to help a troubled environmental activist in Michael Mensana (Philip Ettinger) who is wracked with despair about the world as his wife Mary (Amanda Seyfried) was the one who suggests that Michael should go to Toller for help.

Toller would get close to Mary in helping her as she is also pregnant which adds to Michael’s despair while Toller is trying to understand what Michael is seeing. Throughout the film, Toller would write down the recollections of the day in a journal as it would include voice-over narration that play into Toller’s own feelings as his plan is to write out his thoughts for a year. Even as he is dealing with loss from the past and has trouble trying to connect with others aside from Mary where he also becomes troubled by his surroundings as well as the ideas of climate change which makes him question the world around him.

Schrader’s direction definitely evokes a lot of visual style and themes from those he admire like Ingmar Bergman, Robert Bresson, Carl Theodor Dreyer, Yasujiro Ozu, and Andrei Tarkovsky as he aims for something that is meditative and simple. Shot on various locations in the boroughs of Queens and Brooklyn with the Zion Episcopal Church from the former being the film’s centerpiece and in a 4:3 full-frame aspect ratio. Schrader would use Ozu’s static camera approach to medium shots and close-ups where he doesn’t aim for any kind of camera movement except in a few scenes or in some zooms for close-ups. Still, Schrader uses this approach of not moving the camera to get a lot of coverage including some wide shots of the locations to play into this growing awareness of the ever-changing world that Toller is encountering. Particularly as he does what he can to help others and offer assistance to Jeffers’ church yet becomes troubled by his own reliance on alcohol and other health issues. Schrader’s direction would maintain that sense of discomfort in Toller as he copes with the world at hand where he question his own faith as he would position the camera in a wide or medium shot whenever he’s writing his journal.

Schrader also would create moments of surrealism as it relates to a meeting between Toller and Mary who reveal this non-sexual yet physical intimacy she and her husband did as it’s a moment that play into the fears and hopes of what the two want for the world. It’s a moment that does recall some of the visual ideas of Andrei Tarkovsky as it would play into Toller’s awareness of a world becoming more unruly. The film’s final sequence plays into Toller’s response as it would climax with this celebration of the church as it celebrates its 250th anniversary with Toller being part of the festivities. It is a moment that has Toller display his disdain of what faith is becoming and his act of defiance towards the modern world and how he believes is ruining God’s creation. Overall, Schrader crafts a riveting and rapturous film about a minister dealing with his crisis of faith as well as helping a young woman with an emotionally-troubled husband.

Cinematographer Alexander Dyan does brilliant work with the film’s cinematography by emphasizing on simplistic and natural visuals for many of the interior/exterior daytime scenes along with some lighting for scenes at night as well as a shot during dawn at a decaying location. Editor Benjamin Rodriguez Jr. does excellent work with the editing as it is largely straightforward in terms of its rhythmic cutting as well as not playing to anything remotely stylized in favor of letting shots linger for a while. Production designer Grace Yun, with set decorator Nadya Gurevich and art director Raphael Sorcio, does fantastic work with the look of some of the interiors at the house that Toller stays in next to the church as well as the home that Mary and Michael live in and some of the rooms inside Jeffers’ church. Costume designer Olga Mill does nice work with the costumes as it is largely casual for its winter-time look with many of Toller’s clothes being his black minister clothes and white robes as well as the casual look of the other people in the small town.

Visual effects supervisors Justin Cornish, Brian Houlihan, and John Mangia do terrific work with some of the film’s minimal visual effects as it relates to the fantasy sequence involving Toller and Mary that play into their hopes and fears of the world. Sound editors Ruy Garcia and Michael McMenomy do amazing work with the sound in creating a sparse yet effective atmosphere for much of the locations including these little moments in the quieter scenes and settings. The film’s music by Brian Williams, in his Lustmord pseudonym, is wonderful for its low-key electronic score that only appears in the film sparingly for much of its second half while music supervisor Dina Juntila provides a soundtrack that is mainly music played on location includes rendition of traditional music as well as an acapella cover of a song by Neil Young.

The casting by Susan Shopmaker is superb as it include some notable small roles from Bill Hoag as a worker at the First Reformed church in John Elder, Michael Gaston as a corporate figure in Edward Balq, Victoria Hill as a church worker in Esther who becomes concerned for Toller’s health, and Philip Ettinger as Mary’s troubled husband Michael as an environmental activist who is becoming uneasy about the world around. Cedric “the Entertainer” Kyles is great as Pastor Joel Jeffers as a preacher who runs a megachurch in the small town that is trying to counsel Toller about his troubles while also supervising the organization of the First Reformed church’s 250th anniversary celebration.

Amanda Seyfried is incredible as Mary Mensana as the pregnant wife of an environmental activist who is concerned for her husband as she turns to Toller for help as well as befriend him as someone she can go to for guidance as it’s understated and radiant performance from Seyfried. Finally, there’s Ethan Hawke in a phenomenal performance as Reverend Ernst Toller as a pastor that is troubled by his own health, crisis of faith, and the need to help a troubled activist where it’s a calm yet eerie performance from Hawke who displays an anguish as a man trying to do what he can to help people yet is troubled by the world around him as it’s a true career-defining performance for Hawke.

First Reformed is a tremendous film from Paul Schrader that features a tour-de-force performance from Ethan Hawke. Along with its ensemble cast that includes a phenomenal supporting performance from Amanda Seyfried as well as gorgeous visuals, a simplistic presentation, and compelling themes of faith. It’s a film that play into the ideas of the world at large and a man asking big questions about his surroundings as well as the need to help someone in need. In the end, First Reformed is an outstanding film from Paul Schrader.

Glad you got to see this! I liked, but didn't love it. It was going strong for me until that weird dream sequence and then I wasn't crazy about the ending, but it's a very solid film and Hawke is tremendous in it.

I hope Ethan Hawke gets an oscar nom. Probably won't be in my top 10 of the year because I felt the weaker middle section drags, but the beginning and ending I connected to. I might have liked First Reformed better if I viewed it with subtitles as a lot of it's power is in Schrader's writing.

@Brittani-I wasn't crazy about the ending at first but having thought about it more. I realize why Schrader went for something like that as it play into that glimmer of hope in a world of hopelessness.

@Chris-Sadly, Hawke didn't receive the nomination (fucking bullshit!) but I'm glad Schrader did get an Oscar nod for his screenplay. I would love to see the film again and with subtitles because I love what he wrote. Plus, I was wowed at what he was doing as a director.