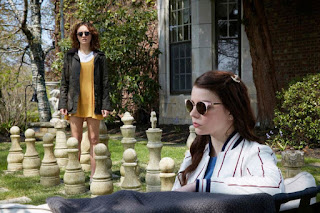 Written and directed by Cory Finley, Thoroughbreds is the story of a high school student and her best friend who create a scheme to kill the former’s stepfather as they hire a drug dealer to do the job. The film is a suspense-drama that play into two girls who try to get a man killed as they cope with what they’re trying to do. Starring Anya Taylor-Joy, Olivia Cooke, Paul Sparks, Francie Swift, and Anton Yelchin. Thoroughbreds is an eerie yet provocative film from Cory Finley.

Two old friends who had been estranged for a few years reunite for a study session as they rekindle their friendship by conspiring to kill one of the girls’ stepfather. It’s a film that play into a simple premise of two young women conspiring to murder a hateful and abusive man as they would get a drug dealer involved to do the job. Cory Finley’s screenplay is told through four chapters as it relates to the strained friendship between Amanda (Olivia Cooke) and Lily (Anya Taylor-Joy) as they’re both from upper-class homes yet haven’t really spoken or seen each other since the death of Lily’s father. Amanda is someone who is unemotional due to a mental disorder where she is sent to Lily’s home for tutoring/studying for an upcoming test as things start off awkward until Amanda gets a glimpse at Lily’s stepfather Mark (Paul Sparks) who runs the household with a very strict demeanor.

Even as he’s putting Lily in a boarding school for her behavioral issues which has Lily turning to Amanda for help as the two would scheme and turn to a drug dealer in Tim (Anton Yelchin). Yet, Tim already has a criminal record where he raises concern about if the plan would work with Amanda having figured out a lot of what to do with Lily also becoming unsure if the plan would work. Adding to the stakes is wondering what can go wrong as it’s something Amanda is fully aware of as she is trying to figure out all of the angles with Lily trying to make plans of her own.

Finley’s direction is straightforward in terms of the compositions and setting as it is shot on location in various small towns in Massachusetts as a small upper-class area in Connecticut. While there are some wide shots and some unique tracking shots in parts of the film, much of Finley’s direction emphasizes more on the interaction between characters and the tension at the home where Lily lives with Mark and her mother Cynthia (Francie Swift). Even in scenes where Amanda reveals how she can fake emotions with Lily along with the two chatting and watching old movies where Finley doesn’t really go for any tricks other than a few close-ups to play into the emotion as well as what is happening in the background as it relates to Mark.

By the time Tim is in the picture as he’s introduced in the first act at a party that Lily goes to, the film does get darker in tone with bits of humor while it also play into the attention to detail of what might happen. Yet, the film’s third act isn’t just about the aftermath of the plan but also Lily’s own reaction as well as the need to act on her own with Amanda realizing what Lily is trying to do. It would include this scene where it’s about what is happening off-screen as it focuses more on a character who is probably aware of what is happening but not in a good frame of mind. Overall, Finley crafts a compelling yet rapturous film about two teenage girls conspiring to kill one of the girls’ stepfather with the help of a drug dealer.

Cinematographer Lyle Vincent does excellent work with the film’s cinematography as it is straightforward for many of the daytime exterior scenes with some low-key and stylish lighting for the interior/exterior scenes at night. Editor Louise Ford does terrific work with the editing as it is straightforward with some rhythmic cuts to play into the drama and suspense. Production designer Jeremy Woodward and set decorator Kyra Friedman Curcio do fantastic work with the look of Lily’s home with all of its posh material including a giant chess set in the backyard. Costume designer Alex Bovaird does nice work with the costumes as it is stylish for the clothes that Amanda and Lily wear.

Sound editor Gene Park and sound designer Roland Vajs do superb work with the sound in maintaining an atmosphere into suspense including the film’s climax that is about the action that is happening off-screen. The film’s music by Erik Friedlander is amazing for its percussive-based score with elements of strings and electronics that help add to the suspense and drama while music supervisor Susan Jacobs creates a soundtrack that is a wide mix of music genres featuring contributions from A Tribe Called Quest, the Sweet Hurt, King Harvest, Rome Will Burn, Tanis Chalopin, and a classical piece from Franz Schubert.

The casting by Douglas Aibel and Stephanie Holbrook is wonderful as it feature a couple of notable small roles from Kaili Vernoff and Francie Swift in their respective roles as Amanda’s mother and Lily’s mother Cynthia. Paul Sparks is superb as Lily’s cruel stepfather Mark as a man who tries to instill his own sense of rules into the home while wanting to send Lily to a boarding school to deal with her own behavioral issues. In one of his final performances, Anton Yelchin is brilliant as Tim as a drug dealer who is hired by Amanda and Lily where he is unsure about doing the job knowing he’s got a criminal record and is trying to maintain a low profile while he raises concern about all of the things that can go wrong.

Finally, there’s the duo of Olivia Cooke and Anya Taylor-Joy in incredible performances in their respective roles as Amanda and Lily. Cooke’s performance is one filled with restraint and dark humor as someone who is devoid of emotion yet is able to figure out what to do and how as it is a performance filled with a lot wit. Taylor-Joy’s performance is also restrained but more emotional as someone that is trying to keep it together while also trying to cope with the scheme she’s doing where she and Cooke have an amazing chemistry in the way they interact as they are major highlights of the film.

Thoroughbreds is a phenomenal film from Cory Finley that features great performances from Olivia Cooke, Anya Taylor-Joy, and the late Anton Yelchin. Along with its eerie visuals, chilling music score, and an entrancing story of scheming and friendship, it’s a film that doesn’t follow the many of conventions expected in a suspense film while studying the behavior of two teenage girls dealing with a terrible man. In the end, Thoroughbreds is a sensational film from Cory Finley.

I'm so glad you liked this! It actually just got bumped off my top 10 list but is in my "just missed" category. It's wonderful.

For whatever reason, my brain decided this was actually an average teen drama...so I'm really glad I read your review, it's on my watchlist now! Sounds brilliant :)

@Brittani-I think it's in my top 20 of 2017 right now as I enjoyed the hell out of it. Plus, I would totally be on board for a film starring Cooke and Taylor-Joy again as buddies.

@Allie Adkins-It's anything but an average teen drama. It's far darker than that.

Fine review. I have had one written up for months but for some dopey reason I still haven't posted it. Gotta fix that. I liked it too...a bit of a surprise really. Makes me sadder that we lost Yelchin.

@keith71_98-Thank you. I"m glad you liked this film as well. I too miss Anton Yelchin. It seems like since Green Room, he was about to embark into a new phase in his acting career that was going to make him far better than many would realize. It's a shame we would never see that but he did leave us a bunch of great films that we will remember him for.