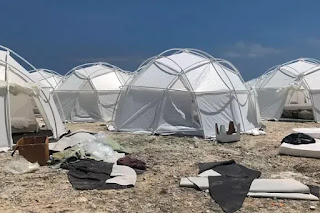 Written and directed by Chris Smith, Fyre: The Greatest Party That Never Happened is a film about the infamous Fyre Festival of 2017 that was promoted as a major music festival held in a tropical island founded by media mogul Billy McFarland and rapper Ja Rule only for a group of people to be conned by landing in an island of tents and cheese sandwiches. The film is a documentary about the events that lead to the formation of the festival and what happened when a bunch of young people arrived and landed in Hell. The result is a gripping yet haunting film from Chris Smith.

On April 27, 2017, thousands of people arrived at the island of Great Exuma at the Bahamas for a lavish music festival that was to feature all sorts of acts such as Blink-182, Major Lazer, Pusha T, Tyga, Disclosure, Migos, and many others with appearances from supermodels such as Emily Ratajkowski, Bella Hadid, and many others as it was supposed to be an experience that would allow young upper-middle class kids to enjoy a lavish lifestyle. What happened instead was they arrived to a land of unfinished tents, soaked mattresses, no musical acts have arrived, no electricity, no Wi-Fi, no supermodels, and worst of all, a sad-looking cheese sandwich in a Styrofoam container with a salad and dressing inside.

Organized by rapper Ja Rule and Fyre Media Inc. CEO Billy McFarland, it was supposed to be a music festival that would compete with other music festivals but it ended up being a nightmare as more than 4,000 people were stuck in the Bahamas trying to get out. On the one hand on paper, it looks like a black comedy where a bunch of young rich kids getting stuck in an island landing in Hell as they wasted lots of money on a music festival that never got off the grounded and ended up recreating Lord of the Flies. However, the reality was that not only did these people got scammed but so did those who were working in the Bahamas and those who were working for McFarland as they were sold by his bullshit.

Writer/director Chris Smith examines what had happened and the events that lead to its formation and downfall as well as how McFarland became successful in the first place through this invitation-only charge card that allowed users exclusive rights to get into certain places and through an affordable price. Through this card, McFarland would create a phone app known as Fyre that would allow rich kids to book celebrities for their parties and such which is how McFarland met Ja Rule and the two became business partners where they decided to create this music festival. They went to the Bahamas and were able to get some models to appear for an advertisement through social media and sold people the idea of this music festival in the Bahamas to feature all of these musical acts and celebrities in an island that was once owned by the Colombian drug lord Pablo Escobar.

The film features interviews with several individuals who were involved in making the festival including product designer Shiyuan Deng, creative director Mdavid Low, event producer Andy King, a former employee from the Bahamas named J.R., logistics/pilot Keith van der Linde, musical festival consultant Marc Weinstein, Exuma Point Restaurant owner Mary Ann Rolle, VICE news journalist Gabrielle Bluestone, and a few people who paid and attended the festival. Much of the interviews are straightforward as Smith and cinematographers Jake Burghart, Cory Fraiman-Lott, and Henry Zaballos would not only interview various individuals at their homes and offices but also in locations where the festival was held including the island of Norman’s Cay which was a private island that was owned by Carlos Lehder Rivas who co-founded the Medellin cartel with Pablo Escobar.

When McFarland mentioned that the island was owned by Escobar in the advertisement for the festival, the island’s owners refused to have the festival be held forcing McFarland and Ja Rule to move the festival to Great Exuma at a location that was unfinished. That would be the slew of many problems the festival would face as well as its dates from April 28-30 and May 5-7 would coincide with Antigua Sailing Week where many private homes and hotels were unavailable since many who would attend this annual event would book their reservations months to a year in advance. The fact that McFarland wanted to have festival attendees stay in these lavish tents with beds and comfortable chairs to live in was something van der Linde felt wouldn’t work as he and his wife stayed in a tent and said it’s an unsuitable idea for anyone to do in the Bahamas.

Then there’s McFarland where Smith and his editors in Jon Karmen and Daniel Koehler would gather footage of meetings he and Ja Rule would have with other people as Andy King talked about how he felt about McFarland until the moment of the festival and its aftermath. Notably when McFarland would be charged with fraud and other criminal charges where he would still live lavishly and try to create another idea in late 2017/early 2018 which showed how delusional he is as well as the arrogance he displays thinking he wasn’t going to jail. It wasn’t just these people who had unfortunately attended the festival and lost a lot of money that were lied to but also local Bahamians including Mary Anne Rolle and J.R. who lost money and the laborers who spent hours and hours building tents and such were never paid.

Others who suffered through this ordeal were people who worked for McFarland including a few who were asked to do this when they admittedly had no idea what they were doing but would be angry over the fact that McFarland left them in debt as well. It wasn’t just through the festival that he created that put him in trouble but also his other business ventures where those claims he was worth $90 million turned out to be false as he tried to sell tickets for events such as Coachella, the Met Gala, and other big events just before he would be sent to prison where he is currently serving six years.

Sound designer Tom Paul and sound editor Nathan Hasz would do superb work in creating sound collages and effects that play into the joy of the festival but also the horror of what it would become. Music supervisors Ricki Askin, Jon Karmen, and Jackie Palazzolo would provide a soundtrack that is mainly ambient music from Aphex Twin as well as Nine Inch Nails and score music from NIN members Trent Reznor and Atticus Ross that help play into the dark reality of what had happened.

Fyre: The Greatest Party That Never Happened is a marvelous film from Chris Smith. It’s a documentary that showcases the idea of a fantasy that was sold by a con artist and a has-been rapper to a bunch of people who ended up on an island eating a lousy cheese sandwich. It’s a film that at times can be comical but also sobering into the reality of what happens when someone goes way over his head into creating something he had no experience with and to make matters worse when he refuses to take responsibility for his actions. In the end, Fyre: The Greatest Party That Never Happened is a remarkable film from Chris Smith.

This doc was so fascinating I watched it twice. Glad you enjoyed it too!

I don't watch many docs but I had to see this. I just feel so bad for the locals who never got paid. The whole thing was a fascinating watch!

@Brittani-It was better than I thought it would be as I wouldn't mind seeing it again. Plus, I hope McFarland enjoys his new social life.... in prison though I feel six years is not enough.

@Allie Adkins-It wasn't just the locals that didn't get paid but also those who were working for McFarland and were asking questions as not only they didn't get paid but ended up getting some of McFarland's debt that they had to pay which is bullshit. Plus, why has Ja Rule haven't gone back to prison? He was his accomplice. He should be charged for his actions.