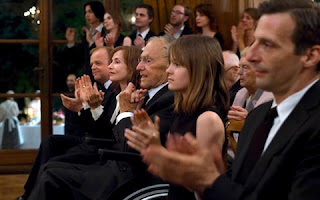 Written and directed by Michael Haneke, Happy End is the story of a bourgeoisie family in Calais whose comfortable life is hindered by events relating to them or around them. It’s a film that explores family dysfunction in an upper-class world as they try to deal with their personal lives just as the growing refugee crisis in Europe is happening around them. Starring Isabelle Huppert, Jean-Louis Trintignant, Mathieu Kassovitz, and Toby Jones. Happy End is a chilling and offbeat film from Michael Haneke.

The film follows a year in the life of a family living in Calais as their personal and professional lives start to unravel by a series of unfortunate events relating to tragedy and other matters. It’s a film that doesn’t have much of a plot as it’s more of an exploration of a family told largely by a 12-year old girl in Eve Laurent (Fantine Harduin) who would capture the events of her mother’s drug overdose through her phone as she would later live with her father Thomas (Mathieu Kassovitz) who shares the family estate with his wife Anais (Laura Verlinden), his sister Anne (Isabelle Huppert), and the family patriarch Georges (Jean-Louis Trintignant).

Michael Haneke’s screenplay features an opening sequence where a section of a construction site collapses and a man that was inside a port-a-potty where the section had collapsed as Anne’s firm runs the site. It’s among the moments that play into the film that are dramatic but in a low-key approach as Haneke also uses the European migrant crisis as a backdrop with mentions of it on TV and parts of the film surrounding the characters. Notably as Thomas is chatting with another woman making Eve believe he has a mistress while Anne is also dealing with her adult son Pierre (Franz Rogowski) who is getting into trouble that is increased by his alcoholism due to his role in the construction accident. Georges meanwhile is suffering from dementia and is intent on committing suicide.

Haneke’s direction doesn’t really have much style other than long and gazing shots as well as this air of detachment into the direction. While the film opens with images of Eve filming things on her phone including the moment of her mother’s collapse from a drug overdose. The usage of smartphones and laptops play to the film’s visuals including the video tape footage of the construction accident where a section of the site collapses as it’s shown in a wide shot. Haneke’s usage of the wide shots add to the stark tone of the film as he displays of disconnect and detachment for characters and the world they’re in whether it’s Anne and Pierre investigating the site and area where the collapse happened or a shot of Eve and Thomas in the beach where the former is in the foreground seeing her father in the background smiling and talking on the phone.

There are moments where Haneke uses a few close-ups and medium shots in the film as it does play into characters attempting to connect such as Anne and Georges with Eve including one scene late in the film following some intense moments between Eve and Georges where it is this simple conversation that shows Haneke being at his most tender and knowing when to cut during this conversation. The film does feature a lot of long takes in shots that would last for more than a minute or two as it would also include these moments where the characters struggle to deal with a situation as some of it is happening off screen or from afar. The moment of reality that is away from their quaint world would come to ahead in the film’s final sequence as it relates to what is happening in Europe as it is about how these characters react to what is going on as well as what is happening around them. Overall, Haneke crafts a riveting yet eerie film about a year in the life of a bourgeoisie family dealing with tragedy and other unfortunate events.

Cinematographer Christian Berger does excellent work with the film’s cinematography with its vibrant usage of natural colors and lighting for the daytime exterior scenes along with some low-key lights for some scenes set at night. Editor Monika Willi does brilliant work with the editing as it is largely straightforward with a few stylistic cuts including a few rhythmic cuts for some of the conversations that occur in the film. Production designer Olivier Radot, with set decorator Nathalie Roubaud and art director Anthony Neale, does fantastic work with the look of the home that the Laurent family lives in as well as the home Eve lived with her mother.

Costume designer Catherine Leterrier does nice work with the costumes as it is largely straightforward with the expensive suits that Anne wears or the summer clothes some of the characters wear. Visual effects supervisor Arnaud Fouquet does terrific work with some of the film’s minimal visual effects such as the construction site accident and a few bits of scenes from the phone. The sound work of Guillaume Sciama is superb for its atmospheric sound as it help play into the atmosphere of the locations as well as the emphasis on natural sounds for scenes involving characters from afar though whatever dialogue is spoken is being heard along with the way music sounds on a radio or on a karaoke machine in one scene of the film.

The casting by David El Hakim and Kris Portier de Bellair is incredible as it feature some notable small roles from Hassam Ghancy and Nabiha Akkari as a Moroccan couple who live at the Laurent estate in Rachid and Jamila who both work for the family with the former being Georges’ most loyal servant and the latter being the maid that everyone likes. Loubna Abidar is wonderful in her small role as a musician named Claire who is believed to be Thomas’ mistress through chats that Eve would discover. Toby Jones is superb as British businessman Lawrence Bradshaw whom is in a relationship with Anne as he helps her deal with the accident while watch from afar the chaos of Anne’s family life. Laura Verlinden is terrific as Thomas’ wife Anais as a woman that is trying to get to know Eve while raising a baby as she is unaware of what her husband is doing. Franz Rogowski is fantastic as Anne’s troubled adult son Pierre as someone who is unable to deal with the responsibilities of his actions as he gets himself into trouble and begins to act out believing he’s unable to cope with taking over the family firm.

Fantine Harduin is excellent as Eve as a 12-year old girl dealing with her mother’s drug overdose as well as some of the drama that is going on in her family as she films some things on her phone while trying to understand this air of detachment around her family. Mathieu Kassovitz is brilliant as Eve’s father Thomas as a doctor who is trying to make Eve comfortable at his home while hiding a secret about his affair with another woman unaware that Eve knows about it as well as question him about ever loving someone. Isabelle Huppert is amazing as Anne as Georges’ eldest child as a woman trying to run a firm that is under scrutiny as she is also dealing with her son’s alcoholism and all sorts of chaos as well as being someone trying to connect with Eve. Finally, there’s Jean-Louis Trintignant in a remarkable performance as Georges Laurent as an old man dealing with dementia who has a death wish for himself where he is tired of his age and life while eventually bonding with Eve about his own feelings of death.

Happy End is a sensational film from Michael Haneke. Featuring a great cast, gorgeous visuals, and a compelling story about a family unraveling amidst the chaos of the European migrant crisis as a backdrop. It’s a film that is a study of a family coping with their surroundings as well as being a different film of sorts from Haneke while maintaining his views on the dark aspects of life that is sprinkled with some humor. In the end, Happy End is an incredible film from Michael Haneke.

Hanke is such an "out there" director. I haven't seen this one of his, but it sounds interesting. I'll probably get to it eventually.

@Brittani-I think it's on Starz! right now as it's a different film of tonally and visually in comparison to his other films but it still has that dark edge that he's known for.

I liked the critique of social media in the the opening and ending scenes, but I think the story needed a longer TV format to fully develop all of the ideas and tangents. The scene when the girl breaks down is powerful, I actually think Fantine Harduin was given the most complex role despite her young age.

@Chris-Harduin was great in this as she definitely displayed someone who is dealing with a lot as I saw it more as a family drama as well as the air of disconnect humanity is having with its usage of social media as we've become dependent on it.

Nice review here. I've been curious to hear your thoughts on this, and I'm really glad you liked it. I need to see it again, because I remember thinking it was too sparse, even by Haneke's standards. But I am curious for a rewatch.

@Alex-Thank you. I think given the recent films that Haneke had done prior to this were dramatically heavy as I think he wanted to do something different for a change and I think it worked as he was able to find some humor in that film. Especially in the ending as it relates to Jean-Louis Trintignant's fate in what he was trying to do. Everyone is freaking out but I'm sure what he thought about as he was trying to drown himself was... "shit... it's too fucking shallow and I can't move and the water isn't deep enough. Fuck! Oh great, here comes the family. I'll have to try again some other day. At least Eve understood and tried to help."