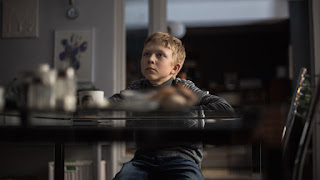 Directed by Andrey Zvyagintsev and written by Zvyagintsev and Oleg Negin, Loveless is the story of a disillusioned couple who are forced to work together after their son had disappeared over anger due to his parents’ hostile relationship towards one another. The film is an exploration of a loveless couple whose bitterness over their marriage force them to deal with the neglect of their son as they try to find him as he had gone missing. Starring Maryana Spivak, Aleksey Rozin, Matvey Novikov, Marina Vasilyeva, and Andris Keiss. Loveless is a haunting and riveting film from Andrey Zvyagintsev.

Set in 2012 near Leningrad, the film follows a divorcing couple whose hatred for one another lead to the disappearance of their 12-year old son as they’re forced to work together to find him as it leads to more trouble between the two. It’s a film that explore two people who hate each other and want nothing to do each other only to focus on the fact that their only child has disappeared with the two confronting each other and themselves about their neglect towards him. The film’s screenplay by Andrey Zvyagintsev and Oleg Negin has a unique structure that plays into a family just coming apart with a young boy stuck in the middle of this nasty divorce between two people who really don’t give a fuck about the boy’s feelings over this divorce nor what they want to do with him once the divorce is final.

The first act is about this extremely dysfunctional family where Zhenya (Maryna Spivak) is selling the apartment she shares with her future ex-husband Boris (Aleksey Rozin) and their 12-year old son Alyosha (Matvey Novikov) as she and Boris fights while they both lead different lives with their respective lovers in the middle-aged Anton (Andris Keiss) and Masha (Marina Vasilyeva) as the latter is pregnant with Boris’ child. The second act is about the realization that Alyosha hasn’t returned home as Zhenya reports his disappearance to the police where a detective (Sergey Borisov) and a search and rescue team leader named Ivan (Alexey Fateev) both lead the investigation. Yet, the search for Alyosha would also lead to more tension and revelations about Zhenya and Boris and why they got married in the first place that just adds to the drama and growing sense of loss for the two.

Zvyagintsev’s direction doesn’t go for anything stylistic other than in maintaining some simplistic compositions as well as images that do play into this air of mystique and ambiguity over the situation that is happening throughout the film. Shot on location in areas near Moscow, Zvyagintsev does use wide shots to not get a scope of the world that is Russia but also use close-ups to get so much attention to detail as it relates to a few things that might play into the mystery and suspense into what happened to Alyosha. The usage of close-ups and medium shots also add to the dramatic tension whenever Boris and Zhenya are in a room together while theirs is that one shot where they’re in the background on a wide shot and in another room in a medium shot is Alyosha crying as it displays exactly what he’s going through. It is a moment that play into this air of neglect where Zvyagintsev shows Alyosha’s parents being more concerned with their own lives than Alyosha as examples include Zhenya with Anton or often looking at her phone in some parts of the film. Boris would either be at work or with Masha not really thinking about Alyosha either though and Zhenya would talk about him to their lovers as if he was mistake and are uncertain about what to do with him.

Zvyagintsev also create these mesmerizing images in the compositions where he would put the actors into a certain spot for the shot but it also in displaying this air of realism such as the scene of Boris and Zhenya meeting the detective who name numerous possibilities about the kid while observing the both of them as he reveals to be a tough yet fair individual who is willing to get to the bottom of Alyosha’s disappearance. One scene that is chilling and disturbing is when Boris, Zhenya, and a police officer go to the home of Zhenya’s mother (Natalya Potapova) as she represents this old idea of what Russia was as she blames her daughter and Boris for Alyosha’s disappearance where Zvyagintsev definitely display some political and social metaphors as it relates to what had happened as well as this disconnect from morality in modern-day Russia. Overall, Zvyagintsev crafts a gripping and eerie film about a divorcing couple dealing with the disappearance of their 12-year old son.

Cinematographer Mikhail Krichman does excellent work with the film’s cinematography with its stark and desolate look with its usage of white, grey, and other colorless imagery for many of the exterior scenes while using some low-key lighting and such for the scenes set at night. Editor Anna Mass does terrific work with the editing as it is largely straightforward that allow shots to linger for more than a minute with a few rhythmic cuts for dramatic purposes. Production designer Andrey Ponkratov does fantastic work with the interior of the family apartment including Alyosha’s room as well as the apartments that Anton and Masha live in. Sound designer Andrey Dergachev does superb work with the sound as it help play into the intense atmosphere of some of the locations including the sparse sounds of nature and sirens heard from afar. The film’s music by Evgueni and Sacha Galperine is wonderful for its low-key piano-based ambient score that appear briefly in parts of the film while the soundtrack include a classical piece from Avro Part and a music appearance from Bring on the Horizon on Boris’ car radio.

The film’s wonderful cast feature some notable small roles from Vavara Shmykova as a police officer who help Boris and Zhenya break into the home of Zhenya’s mother and Natalya Potapova as Zhenya’s mother who is this cold and cruel woman who wants nothing to do with her daughter or her grandson believing they are a burden to her. Sergey Borisov and Alexey Fateev are superb in their respective roles as the detective and the search/rescue leader Ivan as two men who are both good at their jobs while also going through numerous possibilities about Alyosha as well as do whatever they can to find the boy. Marina Vasilyeva and Andris Keiss are fantastic in their respective roles as Boris’ pregnant lover Masha and Zhenya’s middle-aged lover Anton as two people who are concerned with what is happening as Masha believes she is being neglected while Anton becomes concerned about Zhenya though has no real issues with Boris. Matvei Novikov is excellent as Alyosha as the 12-year old son of Boris and Zhenya who is dealing with his parents’ divorce as well as them fighting and saying things about him that would eventually lead to a breakdown and the idea that he ran away.

Aleksey Rozin is brilliant as Boris as a businessman that is concerned with keeping his job while dealing with the chaos of his marriage and the new life he wants to have with Masha as he also copes with Alyosha’s disappearance as well as being unsure about what to do with him once the divorced is finalized. Finally there’s Maryana Spivak in an amazing performance as Zhenya as a mother who is trying to get started on her new life while filled with a lot of bitterness about her marriage to Boris as she deals with what happened to Alyosha as she is in denial that she is at fault for what happened to him.

Loveless is a tremendous film from Andrey Zvyagintsev. Featuring a great cast, its themes of neglect and family, and stark visuals, it’s a film that explore a divorcing couple who try to find their son as well as deal with themselves as it also serves as a metaphor for the declining sense of morality in modern-day Russia. In the end, Loveless is a spectacular film from Andrey Zvyagintsev.

This one's a bit hard to watch and often feels cold, I thought. The style is sparse, but as you say, the close shots often have us hunting for more - for clues, perhaps, for understanding.

@Jay-It is not an easy film to watch but I was engaged by it as I want to see more what Zvyagintsev will do although he is stirring up some shit in Russia as I hope he is still alive or out of the country.

This movie is the definition of bleak. That shot of the boy crying in the bathroom as he listens to his parents talk about dropping him in an orphanage was devastating. I wanted so badly for some clue that he was off being happy and loved elsewhere and of course that's too good to be true.

@Brittani-I have no problems with bleak films as I find bleakness to be the closest thing to reality than some films. I felt so bad for the boy and yes if it was a Hollywood film, he's be off in some place where he's happy but this is not a Hollywood film. It's really a metaphor for the moral state of Russia under Putin.