For the 23rd week of 2019 as part of Wandering Through the Shelves' Thursday Movie Picks. We venture into the subject of babysitters and nannies as those who are there to take care of other people’s kids where there’s something good happening or something stupid. Then there’s those films that are just really fucked up. Here are my three picks:

From Chris Columbus is a film that definitely lives up to the adventure namesake where a young woman is stood up from her date as she takes a babysitting gig only to drive the kids she’s taking care of to Chicago to retrieve a friend who has ran away from home. Featuring a winning performance from Elisabeth Shue, it’s a film that is a fun and entertaining while a young girl gets to meet an early version of Thor played by Vincent D’Onofrio as they all get into some crazy shit in Chicago. 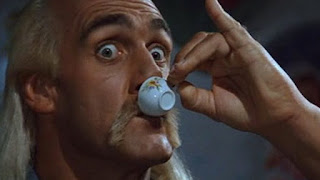 Excuse me… if I’m going to talk about this piece of shit film. I’ll need to get in character.

Let me tell you something brothers! This movie brother is one of the best movies that I ever did brother! It has me as a former wrestler dealing with demons as he does a favor for Mr. Jefferson brother. I take care a couple of these kids brother including a young girl brother who would turn out to be extremely jacked and hot like my daughter Brooke brother. I also have to deal with that guy from some band that never made it big brother like the time I auditioned to play bass for Metallica brother! He had a hit with some song in the 80s brother but it wasn’t as big as the time I slammed Andre the Giant in front of a million people inside the Silverdome brother! It’s a great movie brother as it would’ve put me on top and made me bigger than I am brother! Oh brother, brother, brother!

From Robert Pucini and Shari Springer Berman comes an adaptation of Emma Laughlin’s novel that is OK but tries too much to be a light-hearted comedy but also a study about the nannies. It has its moments and some funny moments from Scarlett Johansson including her scenes with Chris Evans before they became part of the MCU!!!! Yet, it is a film that is inconsistent in tone and some of the dramatic approach to the editing and direction doesn’t really pay off as it ends up being manipulative in the worst kind. It’s not a bad film but it’s not a great film.

Delighted to see Adventures in Babysitting - a real childhood treasure.

Oh I LOVE Adventures in Babysitting!!! It's very popular today as it should be. Elisabeth Shue is flat out great in it as is Penelope Ann Miller and the three kids in Shue's charge are all wonderful in their own ways. Just a fun time film, it was one of thought of right away too but had used before.

I've seen pieces of Mr. Nanny but not much....however enough to know I don't need to see more.

You're right about The Nanny Diaries. It was merely adequate.

I also went the Nanny/Governess route myself.

Jane Eyre (1943)-After losing her parents and being raised in a hellish boarding school one step above an orphan asylum Jane Eyre (Joan Fontaine) is hired to be governess for Adele (Margaret O’Brien) the daughter of intense, brooding Edward Rochester (Orson Welles) at the remote Thornfield mansion. Attracted to him but wary she soon finds the mansion is a place of many secrets, some of which could be deadly. Based on the Charlotte Bronte novel.

The Nanny (1965)-Nanny (Bette Davis), a London family's live-in maid, brings morbid 10-year-old Joey (William Dix) back from the psychiatric ward he's been in for two years, since the death of his younger sister. Joey refuses to eat any food Nanny's prepared or take a bath with her in the room. He also demands to sleep in a room with a lock. Joey's parents-workaholic Bill (James Villiers) and neurotic Virgie (Wendy Craig)-are sure Joey is disturbed, but he may have good reason to be terrified of Nanny. A battle of wits and wills ensues. Taut psychological drama was unfortunately lumped in with the hagsploitation films that became popular after the success of Davis’s “Whatever Happened to Baby Jane?” It is unrelated to them and much better.

The Hand that Rocks the Cradle (1992)-During what should be a routine visit to her new obstetrician Claire Bartel (Annabella Sciorra) is molested by the doctor and reports him to the police. Rather than taking the rap the doctor commits suicide. The shock of the accusations and suicide causes the doctor's pregnant wife, Peyton (Rebecca De Mornay), to miscarry. Now unhinged mentally but seemingly normal Peyton poses as a nanny for the Bartel family with the intention of tearing Claire's life apart, seducing her husband (Matt McCoy) and eventually murdering the woman she blames for ruining her life. While the setup is a bit ripe De Mornay is fantastic and makes the picture much more than it should be.

It's been years since I've seen Adventures in Babysitting, but I remember it being a load of fun. The Nannie Diaries is just a cute movie. I enjoyed it. I haven't seen Mr. Nanny, but I felt the Hulkamania running wild in your entry for it.

I never seen Adventures in Babysitting before, but it sounds like an interesting film!

Adventures in Babysitting is another popular film this week which I should see. Oh you are funny describing thatHulk film which I will avoid. I forgot about the Nanny Diaries which I should watch one day

I haven't seen The Nanny Diaries yet but as a MCU fan I'm curious about that one :-D