For the 50th week of 2019 as part of Wandering Through the Shelves' Thursday Movie Picks. We venture into the subject of films with super long titles. There aren’t a lot of films that feature long titles yet they do feature stories that are very interesting or something comical. Here are my three picks:

1. Swept Away... by an Unusual Destiny in the Blue Sea of August 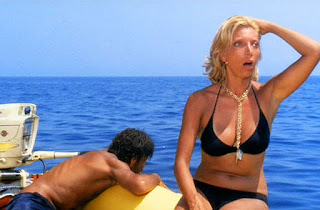 Lina Wertmuller’s film about two people stranded on an island as they have to endure their social and political differences that also include the role of man and woman is definitely a film that was quite controversial in its gender and social politics. Yet, it play into these people who immediately don’t like each other as the man is from the working class while the woman is rich yet they are forced to deal with each other and eventually see the highs and lows of their respective beliefs. The film is a landmark in terms of the way it explore sexual and gender politics that was unfortunately remade in 2002 by Guy Ritchie starring ugh… Madonna. 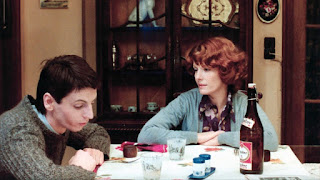 Chantal Akerman’s 1975 feature film is a fascinating yet low-key study of the life of a woman who spends her time tending to her teenage son while making dinner in great detail as well as do time sleeping with men for money. It’s a film with a minimalist plot as there’s not much action with Akerman often having the camera linger into the day-to-day activities of the titular character played with such power by the late, great Delphine Seyrig. It’s not an easy film to watch partially due to its near three-and-a-half hour running time yet it is still a film that is worth seeking out about how the smallest details can impact a woman’s life.

3. The Assassination of Jesse James by the Coward Robert Ford

Andrew Dominik’s story about the final days of Jesse James is definitely one of the great westerns of the 21st Century so far. It’s an unusual western that play into the events of James’ final days as he takes in a young man in Robert Ford only to insult Ford who would later kill James. Brad Pitt provides a restraint and eeriness to the role of James while Casey Affleck provides a naivety that descends into disillusionment in the role of Ford as he would cope with its aftermath as someone who was more of a coward than a hero. Featuring the gorgeous cinematography from Roger Deakins and a majestic score by Nick Cave and Warren Ellis, it is a film that needs to be seen.

Jeanne sounded interesting until you mentioned 3.5 hr run time. I'm burnt out on that now lol.
I've only seen Jesse James, which I like, but I still cannot get over the fact that they tried to say Casey Affleck was playing a 19 year old. Had the left that one line out, I would've liked it so much more. It distracted me.

I thoroughly detested Jeanne Dielman. It was grindingly boring, I feel the same about the other Akerman's films I've seen.

Jesse James is a challenge watch with its glacial pace but if you stick with it the film pays off.

I've never seen Swept Away other than little bits and pieces but do intend to give it a look one day.

None of mine could honestly be called good films but they all share a bold oddity...and long titles!

“Oh Dad, Poor Dad, Mamma’s Hung You in the Closet and I’m Feelin’ So Sad” (1967)-Madame Rosepettle (Rosalind Russell) arrives at a Caribbean resort for a vacation with quite a menagerie, her 24 year old son (Robert Morse) who acts like a 5 year old, his stamp collection and telescope, a pair of Venus Flytraps, her tank of pet piranhas and her dead husband (Jonathan Winters-who serves as narrator) who she’s had stuffed and travels with them in his coffin that she keeps in the closet. While they are there the hotel’s babysitter Rosalie (Barbara Harris) falls for the infantile young man while Madame is pursued by a crazy ship captain, Commodore Roseabove. Got that? Its theatre of the absurd and the kind of whack-a-doodle thing that could only be produced in the 60’s.

“Can Heironymus Merkin Ever Forget Mercy Humppe and Find True Happiness?” (1969)-Superstar Heironymus Merkin (Anthony Newley) is filming a movie of his life surrounded by piles of junk and a bed on a ribbon of beach as his mother and children bear witness. While the Greek chorus of devil’s advocate Goodtime Eddie Filth (Milton Berle) and The Presence (Georgie Jessel) battle for his soul Merkin works his way to the top of show biz becoming a drug loving sex addict along the way. Yet he longs for his lost true love, Mercy Humppe (Connie Kreski) despite his marriage to Polyester Poontang (Joan Collins-Newley’s wife at the time, their real life children play their kids in the film-Thaxted and Thumbelina!). Watching the uncompleted footage in a parallel time the producers of this opus scream for him to come up with an ending. Merkin shuffles through his memories to find some value in his life while singing a couple songs and screwing like a rabbit.

Confused? What with a title like that you were expecting coherence? Watching the film won’t clear anything up for you! Newley directed, produced, wrote & composed the music (all badly) for this exercise in vanity which was originally rated X.

“The Incredibly Strange Creatures Who Stopped Living and Became Mixed-Up Zombies!!?” (1964)-I really can’t better this IMDB description: "Jerry falls in love with a stripper he meets at a carnival. Little does he know that she is the sister of a gypsy fortune teller whose predictions he had scoffed at earlier. The gypsy turns him into a zombie and he goes on a killing spree."

I haven't seen Swept Away... by an Unusual Destiny in the Blue Sea of August but I've heard of it as my father often mentions it because of the long title.

I also picked Jesse James as it's a film I adore.

I wasn't aware that the ghastly Madonna movie was based on a different film! Might give that one a chance.

I've only seen Jesse James of your picks. The others sound interesting. Need to check those out.

I mentioned this elsewhere but you have to include "The Man Who Killed Hitler and Then the Bigfoot". Not only is it a wacky title but its really long.