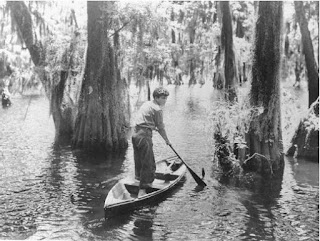 Directed by Robert J. Flaherty and written by Robert J. Flaherty and Frances H. Flaherty, Louisiana Story is the story of a Cajun boy and his pet raccoon as their idyllic life is disrupted by oil well drilling near their home. The film is a mixture of documentary and fiction as it was commissioned by the Standard Oil Company to promote oil drilling in the bayous as Flaherty explores a boy’s encounter with this new world that is oil. Starring Joseph Bordeaux, Lionel Le Blanc, E. Bienvenu, Frank Hardy, and Oscar J Yarborough. Louisiana Story is a rapturous and compelling film from Robert J. Flaherty.

The film revolves around a 12-year old boy living in the bayou as an oil rig has arrived nearby for oil drilling as the boy is fascinated by this new phenomenon. It’s a film with a simple premise that explore the emergence of oil drilling in the Louisiana bayou with a boy living nearby as his father agreed to have this oil company drill near his home. While there isn’t much plot in the film as the script by Robert J. and Frances H. Flaherty blur the lines between this narrative involving this young boy and his family and the reality that is happening with an oil well happening nearby. It does play into this emergence of two different worlds in the idyllic bayou with its natural surroundings and this modern world that is the oil business as the oil workers are fascinated by the young boy in the catfish he catches as well as other things he finds. The boy himself would be intrigued by what is going on in the oil well though his father prefers to stay away from the oil business knowing that he’ll make money if they succeed.

Robert J. Flaherty’s direction is largely simplistic as it aims for a documentary approach for much of the film that include scenes images of nature and scenes of what goes on inside the oil well. Shot on location at the bayous of Louisiana, Flaherty’s approach to the story of the boy with his pet raccoon is straightforward with some shots towards the animals in the bayou including alligators, birds, and other creatures with some wide and medium shots to get a scope of the locations. Flaherty also captures what goes inside the oil well as well as the drilling as it play into this emergence of a modern world that is imposing its well on the natural world. Yet, Flaherty chooses to show the oilmen as just ordinary people who take a liking to the boy as they’re just men who work hard and try to get oil at a time when the country needed it.

Flaherty also play up this air of trying to create something natural in his depiction of nature as it include a scene where the boy is going after an animal while his pet raccoon is trying to run away from an alligator. Flaherty also showcases the dangers of what could happen at an oil well as it adds to this boy’s curiosity as he has no real connection with the modern world but is still intrigued by it. Even as its third act is about this unexpected harmony between nature and industry as it showcased a moment in time when there wasn’t any resistance but rather compromise and sensibility during a new period in America. Overall, Flaherty crafts a riveting and engaging film about a Cajun boy’s encounter with an oil well in the Louisiana bayou.

Cinematographer Richard Leacock does brilliant work with the film’s black-and-white photography as it captures the beauty of the locations and its surroundings with its emphasis on shadows for some of the scenes in the bayou and swamps. Editor Helen van Dongen does excellent work with the editing as it has bits of style in its transition wipes and rhythmic cuts to play into some of the dramatic reaction as well as the sense of wonderment in the locations. Sound recordist Benjamin Doniger does fantastic work with the sound in capturing the way oil wells sound from afar and up close as well as the sounds of nature in their natural setting. The film’s music by Virgil Thomson is amazing for its upbeat orchestral score that play into the boy’s curiosity as well as the surroundings of the bayou as it’s a highlight of the film.

The film’s wonderful cast mainly feature non-actors that include Oscar J. Yarborough as the oil company lessor, Frank Hardy as the oil driller, C.P. Guerdy as the boilerman, and the duo of Lionel Le Blanc and E. Bienvenu as the boy’s parents as they all at least bring a realism to their performances as good-hearted people. Finally, there’s Joseph Bordeaux in a superb performance as the boy who encounters the oil well and its workers while spending much of his life on his boat with his pet raccoon and catching fish as it’s just a natural and low-key performance from Bordeaux.

Louisiana Story is an incredible film from Robert J. Flaherty. Through its mixture of documentary and narrative-based filmmaker, it’s a film that explores life in the Louisiana bayous at a time when the oil industry would arrive with a boy’s fascination into this emergence of the modern world. Even as it’s a film that blur the lines of what is real and what is fiction as it manages to blend the two into something unique in the art of storytelling. In the end, Louisiana Story is a sensational film from Robert J. Flaherty.

Related: Nanook of the North

We have a very different view on this one. I believe my high concept pitch for this was "Cajuns have magic spit."

Ah, well. If we always had the same opinion, one of us would be unnecessary.

I've never heard of this but it sounds very interesting with those two styles. I've been thinking a lot about Beasts of the Southern Wild lately and the setting reminded me of it again.

@SJHoneywell-True. I can understand why this film wouldn't work given what we know now about the environmental implications about the oil drilling in Louisiana. Still, I was intrigued by it as well as the story itself.

@Brittani-This was on TCM earlier this month as it's a film that isn't shown often yet it is still something worth watching if you want to explore the idea of docu-fiction.

In one of the outdoor scenes, I remember three camera shots of animals that (if memory serves me correctly) were edited together in succession - a deer, a rabbit, and a skunk. This made me wonder if this was a homage to Disney's Bambi. Did you catch that? I'll need to watch this film again and pay more attention to the music score; I read somewhere that it won a Pulitzer Prize for music. (I'm guessing he rules for awarding the prize were changed afterwards since no other film scores were awarded; surely other composers such as John Williams or Ennio Morricone would have been awarded the prize in subsequent years).

@Tom-I do remember those shots but I never thought of Bambi when I saw it. I'll need to see it again.