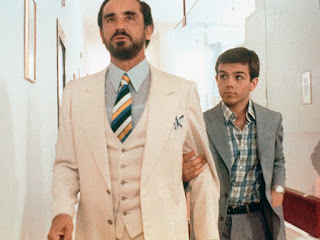 Based on the story Il buio e il miele by Giovanni Arpino, Profumo di donna (Scent of a Woman) is the story of a blind army captain who is accompanied by a young man on a road trip from Turin to Naples to meet an old friend. Directed by Dino Risi and screenplay by Risi and Ruggero Maccari, the film is a road movie of sorts that follows a blind captain and his young aide as they go on a journey with the latter getting some life lessons. Starring Vittorio Gassman, Alessandro Momo, and Agostina Belli. Profumu di donna is a majestic and haunting film from Dino Risi.

A military cadet is tasked to accompany a blind army captain from Turin to Naples for a trip through Italy as the captain wants to meet an old friend to fulfill a pact while the young cadet gets life lessons along the way. It’s a film with a simple premise though it is more of a study of a young man accompanying a blind man who has lived a fascinating life yet is also cruel at times as well as selfish. However, his greatest gift is capturing the scent of a woman as he is always fascinated by them. The film’s screenplay by Dino Risi and Ruggero Maccari follows Giovanni Bertazzi (Alessandro Momo) who is tasked to accompany Captain Fausto Consolo (Vittorio Gassman) for this trip as Captain Consolo is a man that is trying to have some fun as well as women as he can smell them where Giovanni is baffled by this Cpt. Consolo’s way with women but also how he treats others where he can be cruel or indifferent. The film’s third act set in Naples does reveal why he’s there but also some complications in the form of a young woman Cpt. Consolo knew in Sara (Agostina Belli).

Risi’s direction is definitely full of energy as it play into the journey that these two men take via train and stopping from town to town as it is shot on many locations in Italy such as Turin, Rome, Genoa, and Naples. While Risi would use a lot of wide shots of the locations, much of Risi’s direction is intimate as it play into the relationship between Giovanni and Cpt. Consolo as he uses close-ups and medium shots to play into their companionship. Especially as Giovanni is eager to go to Rome to meet his girlfriend yet is often dragged into other things in Cpt. Consolo as he finds himself in situations that are comical as well as filled with some drama. By the time the film reaches its third act in Naples, Risi does play into some of the tension of Cpt. Consolo’s intention for going to Naples as it relates to another blind officer in Vincenzo (Torindo Bernardi) as they reminisce and have dinner while the presence of Sara complicates things as she knew him when she was a young woman.

Risi also play into Giovanni’s reaction as he becomes smitten by Sara whom Cpt. Consolo was fond of as he was hoping to be the love of his life. There is a flashback scene told by Sara as it play to how youthful Cpt. Consolo was but the accident did leave him a mental scar that he doesn’t want Sara to see. Yet, he would treat her cruelly during his time in Naples while focusing his attention on other women prompting Sara to go to Giovanni just to talk. A party happens in Cpt. Consolo’s honor as it really brings up a lot of things as well as his true intentions for his trip to Naples that is later followed by a troubled aftermath about who he is and how Giovanni sees him. Overall, Risi crafts a mesmerizing yet somber film about a young man’s journey in accompanying a troubled and blind army captain through Italy.

Cinematographer Claudio Cirillo does brilliant work with the film’s cinematography in capturing the daytime beauty of the exterior locations with all of its vibrant colors as well as capturing some of the low-key yet naturalistic look for a few scenes set at night including a stylish dream sequence that Giovanni has. Editor Alberto Gallitti does excellent work with the editing as it is largely straightforward with a few sequences presented as montage including the flashback scenes. Production designer Lorenzo Baraldi does fantastic work with the home that Cpt. Consolo lives in early in the film as well as the hotel rooms he and Giovanni go to and the home of Vincenzo.

Costume designer Benito Persico does nice work with the costumes from the stylish suits that Cpt. Consolo and Giovanni wears to the summer dresses Sara and her friends wear. The sound work of Vittorio Massi is terrific for its natural sound as well as the atmosphere of the locations and a nightclub that Cpt. Consolo and Giovanni go to. The film’s music by Armando Trovajoli is incredible for its rich and lush orchestral score with heavy piano and string arrangements that soar throughout the film as it also include some somber and plaintive pieces that play into the melodrama while its music soundtrack also include an array of classical and pop music pieces of the time.

The film’s wonderful cast feature some notable small roles from the trio of Elena Veronese, Stefania Spugnini, and Marisa Volonnino as Sara’s friends who enjoy Cpt. Consolo’s flirtations, Alvaro Vitali as a soldier who helps Vincenzo, Moira Orfei as a prostitute that Cpt. Consolo and Giovanni meet in Genoa, and Torindo Bernardi as Cpt. Consolo’s old military friend Vincenzo who is also blind due to an accident that also blinded Cpt. Consolo. Agostina Belli is amazing as Sara as a woman who was the object of affection for Cpt. Consolo years ago before he became blind as she is troubled by his behavior as well as the way he treats her prompting her to tell Giovanni about what happened. Alessandro Momo is brilliant as Giovanni Bertazzi aka Ciccio (kiddo) as this young military cadet who is tasked to accompany Cpt. Consolo as he deals with the task at hand but also getting some life lessons along the way where he also understands what he has to do as a man. Finally, there’s Vittorio Gassman in a phenomenal performance as Captain Fausto Consolo as this man who has a great sense of smell for women as he charms and flirts with them as well as be cruel to people as it is a performance for the ages as Gassman provides that mixture of cruelty and wit as it also hides the great pain that his character is carrying about what happened to him.

Profumo di donna is an incredible film from Dino Risi that features a tremendous performance from Vittorio Gassman. Along with its ensemble cast, gorgeous settings, compelling story of life and loss, and a riveting score by Armando Trovajoli. It’s a film that explores two men on a journey through Italy as they both embark on some life lessons and other things as well as learn about themselves. In the end, Profumo di donna is a sensational film from Dino Risi.

I didn't realize the one with Pacino was a remake. Filing this one under #TheMoreYouKnow. I Haven't seen either, even though this one sounds really good. I'll have to look out for it.

@Brittani-Many people either forget or didn't know that Scent of a Woman is a remake of an Italian film yet both of them are very different. Dino Risi's film is less plot-driven as it's more of a character study in comparison to the Martin Brest remake. Plus, the humor is far more different as I like Risi's version a bit more because there's no "hoo-ha!".

I knew it only because my grandfather rented it mistakenly and he's still mad about it.

@Jay-Ah, he thought it was the remake. Shame he didn't like the other version but at least that version didn't have a lot of "hoo-ha".