In the 12th week of 2020 for Wandering Through the Shelves' Thursday Movie Picks. We venture into the simple subject of bad boys. Boys who don’t play by the rules nor do they do things that good boys do. After all, good girls like bad boys. Here are my three picks of three cinematic bad boys from the MCU!!!!!!: If there’s one bad boy that the ladies already love, it’s Loki. The ultimate anti-hero and God of Mischief is definitely a misunderstood character who did bad things but looks cool doing it. In the second Thor film, Loki steals the show as he reluctantly help his adopted older brother in defeating the Dark Elves but also do some funny moments such as the montage of him putting on different disguises through his illusions including one as Captain America. Yet, the adventure he would have with Thor would inspire the great Norse mythology play that is The Tragedy of Loki of Asgard starring Matt Damon as Loki, Luke Hemsworth as Thor, and Sam Neill as Odin that has received much acclaim except from Thor who had a mixed reaction towards the play. 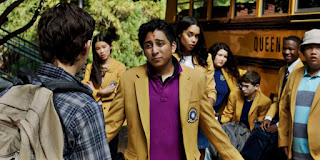 Though the character is known largely in comics and previous film adaptations as a physical bully to Peter Parker before Parker became Spider-Man, the new version that is created through the new film series is largely different as he’s more a social bully. Tony Revolori brings a new personality to Flash as he’s more of a dick that thinks he’s cool and can drive a fancy car while is also smart. Yet, he’s not meant to be taken seriously as Parker as Spider-Man was able to scare him making Flash respect the guy and says to his classmates that Spider-Man wants to make him a better person before he sees Parker and says “what up dick-wad?” It’s a funnier version of the character who does get his comeuppance but also manages to do some good. 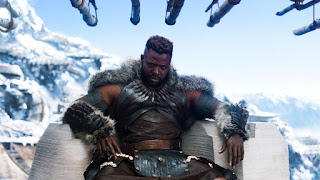 Though he is portrayed in the comics and in a previous animated TV show version as a villain, M’Baku isn’t really an antagonist as he’s really just someone that doesn’t share T’Challa’s idea of technology in favor of something more traditional. M’Baku is first seen as a tribe leader wanting to challenge for the throne of Wakanda as he did it with honor and managed to get some nice shots at T’Challa before accepting defeat. He’s also someone who is full of humor as he is just someone that is full of sarcasm and pride about the fact that he prefers to not be involved in other people’s messes. Yet, when Wakanda is in danger. He will be on the battlefield kicking ass as he does love a good fight and he's a vegetarian.

I'm 0 for 3 this time out but I've never been much for Marvel and now that them turn them out like a Pez dispenser I'm even less likely to watch.

I went with a small theme within the theme.

Bad Boy (1935)-Pool shark Eddie Nolan (James Dunn) would like nothing better than to spend his time shaking down suckers and shooting the breeze with the other sharks. But he loves Sally Larkin (Dorothy Wilson) whose parents think him a bad boy wastrel and refuse until he has a reputable job. Eddie tries the straight and narrow but is unable to find a place. Driven to despair he contemplates whether he has anything to live for. Fast paced programmer, under an hour, definitely foreshadows Capra’s “It’s a Wonderful Life”.

Bad Boy (1949)-Bad boy delinquent Danny (Audie Murphy) has a raft of charges against him but the judge decides to give him one more chance and sends to the reform school Variety Ranch run by caring Marshall & Maud Brown (Lloyd Nolan & Jane Wyatt) to see if he is capable of redemption. With an enormous chip on his shoulder tough nut Danny may prove to be more than even the Browns can handle.

There are so many great bad boys in the cartoon universe! Admittedly, I've only seen Black Panther but thoroughly enjoyed it.

I love what you did here! I'm glad you picked The Dark World, tbh I like it better than the first Thor film, though Ragnarok is still #1

I liked what they did with Flash in the new films, it's an interesting take and the actor is good.

I love that you went with MCU characters! Loki is certainly one of my all-time favorite bad boys.

I have only seen the Spiderman films with Tobey Maguire. I have to catch up. Loki is a very fun character and such a bad boy with his horns. Black panther guy is bad but he sticks to the code which is good

Whassup! I'm a big MCU fan, so I love your theme within the theme. And of course, Loki is the man.