In the 38th week of 2020 for Wandering Through the Shelves' Thursday Movie Picks. We go into the subject of the band. Films about a music band just trying to create music or a band that is just coming to an end. Whether it’s real or fiction. Here are my three picks: 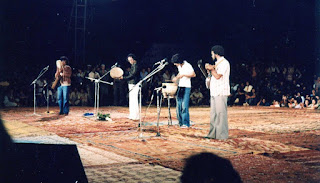 Unless you are familiar with Martin Scorsese’s World Cinema Project, this film from Ahmed El Maanoui is considered a gem on world cinema as it explores the music of the Moroccan folk band Nass El Ghiwane. Made during a tumultuous time in the country, the film explores this band making music that expresses a lot of the political and social turmoil of the time with a focus on the country itself. It’s a film that is told in different styles with live performances, interviews, stock footage, and profiles on the five band members including insight into the Moroccan theatre scene of the 1960s.

2. I Am Trying to Break Your Heart: A Film About Wilco 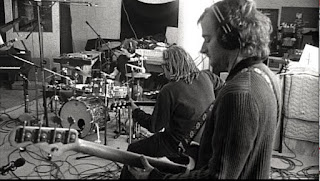 One of the great American bands to emerge from mid-1990s as an alt-country band born from the ashes of Uncle Tupelo to becoming this experimental rock band with touches of alt-country, indie, and such. Wilco is a band that may not have a lot of mainstream success but a devoted following that has continued to thrive. The 2002 documentary by Sam Jones explore the making of the band’s landmark 2001 release Yankee Hotel Foxtrot as it showcases a band dealing with recent departures, issues with their record label Reprise Records following a change in leadership, tension between vocalist/guitarist/songwriter Jeff Tweedy and multi-instrumentalist Jay Bennett that lead to the latter’s departure after the album’s completion as it showcases a band trying to make an album and without any compromise during a tumultuous time in the music industry. 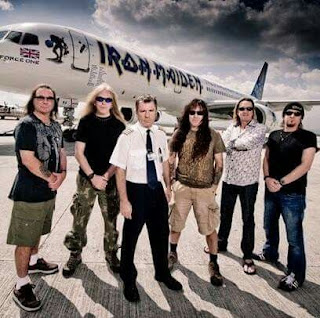 One of the most popular and seminal bands of the heavy metal genre, Iron Maiden remains one of the most vital bands in heavy metal as the 2009 documentary film by Scot McFayden and Sam Dunn explore the band’s 2008 Somewhere Back in Time world tour. What makes the documentary unique isn’t just the fact that the band did this world tour in 5 continents on Boeing 757 named Ed Force One but also for the fact that it’s co-piloted by their vocalist Bruce Dickinson. The tour itself is unique as the band play in countries that rarely had any major worldwide acts arrive in their country. Especially in countries in Latin America where Iron Maiden’s following is immense with stops in Bogota, Colombia, and San Jose, Costa Rica in big stadiums. The latter of which almost never happened due to a bruise that drummer Nicko McBrain received when he played golf as the idea of a band like Iron Maiden playing in a third-world country like Costa Rica is surprising. It’s a film that also showcases a band who are humble and proud of their success while being surrounded by personnel and family who contribute to their success.

I like both these bands, but never heard of these films. But then I don't keep up with music like I used to.

When I saw the topic "The Band" I immediately thought of the group of that name. That in turn might make me think of The Band's farewell concert film The Last Waltz--great concert film.

I love Wilco. I've seen Wilco close-up at a 600-occupancy standing room-only bar a couple of miles from my house. I saw them on the A Ghost is Born tour and again on Sky Blue Sky. Great shows, rivaled only by seeing Yo La Tengo there a few years ago before the building was condemned because of flood damage. So damn sad, because it was a great venue, and they brought in fantastic acts.The 2004 show was the Ghost is Born tour opener.

Oh, I Am Trying to Break Your Heart is a great film, too.

Haven't seen any of these, but I'm definitely intrigued by the Iron Maiden doc.

I definitely need to check out Am Trying to Break Your Heart: A Film About Wilco!

Iron Maiden is the only I’m familiar with but I don’t like their music.

I haven't seen any of these but I found your mentioning of Iron Maiden's popularity in other countries interesting. I had a friend that went to Costa Rica on vacation and a hotel nearby was hosting an Iron Maiden concert and she was shocked at how many people where there for it.

I haven’t seen any of these and I am not I to their type of music even though there are a couple of songs I like.